More than 1,600 fast radio bursts over a 47-day span have been detected coming from a galaxy 3 billion-light years away

An international group of researchers have discovered that more than 1,600 Fast Radio Bursts (FRBs) were released from FRB 121102 over a span of 47 days in 2019, more than all the recorded brief flashes of energy combined.

The experts, led by those at National Astronomical Observatories of Chinese Academy of Sciences, discovered 1,652 FRBs were released between August 29 and October 29, 2019.

This independent group of bursts were detected over a span of 59.5 hours.

The highest cadence during the burst saw a peak of 122 FRBs over the span of one hour, the highest rate of any FRB observed so far. 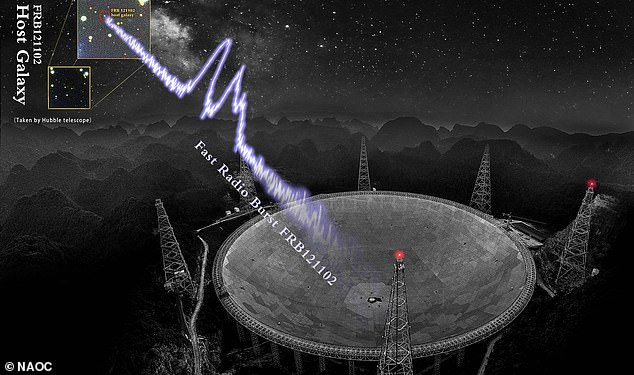 Researchers discovered more than 1,600 fast radio bursts from FRB 121102 over a span of 47 days, more than all the recorded FRBs combined 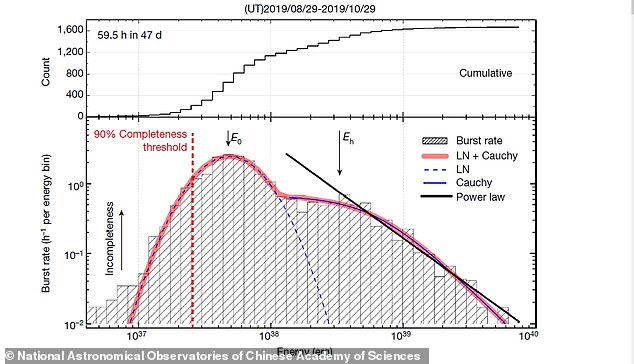 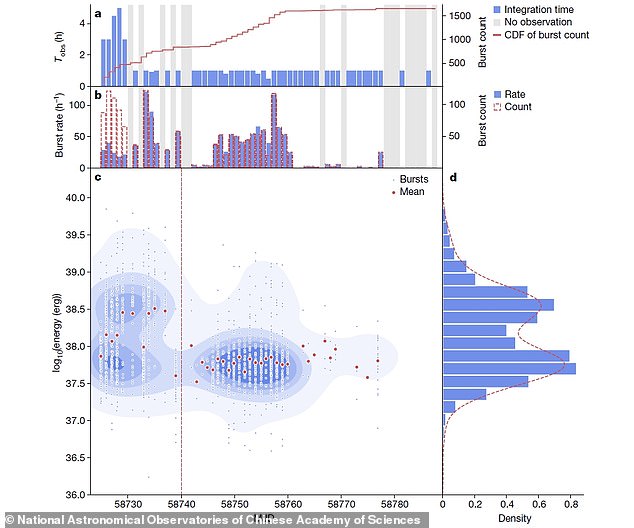 FRBs are very short but very intense pulses of radio waves that can last as little as one-thousandth of a second, while producing as much energy as the sun does in one year.

‘The total energy of this burst set already adds up to 3.8% of what is available from a magnetar and no periodicity was found between 1 ms and 1000 s, both of which severely constrains the possibility that FRB 121102 comes from an isolated compact object,’ said one of the study’s co-authors, Dr Peng Wang, in a statement.

The researchers’ discovery was made using the Five-hundred-meter Aperture Spherical radio Telescope (FAST).

They were first discovered in 2007, but their origins remain unknown to astronomers.

In August 2020, astronomers confirmed that it repeats on a 157-day cycle.

Although past astronomers have determined that FRB 121102 has a 157-day schedule, it has described as ‘seasonal’

FRB 121102 is believed to be hosted in a dwarf spiral galaxy, roughly 3 billion light-years from Earth.

The origin of FRBs are unknown and though intelligent life has been posited as a potential explanation, more likely is something in nature, perhaps a rotating neutron star, black hole or even a cosmic string left over from the Big Bang.

Although past astronomers have determined that FRB 121102 has a 157-day schedule, it has described as ‘seasonal.’

Only a smaller number of FRBs repeat, with most of them having unpredictable appearances.

FRBs – described as ‘brief and mysterious beacons’ – have been spotted in various and distant parts of the universe, as well as in our own galaxy.

The study was published on Wednesday in the scientific journal Nature.

In June, astronomers announced that the CHIME radio discovered more than 500 FRBs in its first year of operation, which at the time, quadrupled the number discovered.

FRBs were initially discovered in 2007, but it’s unclear where they originate from or what causes them.

Fast radio bursts, or FRBs, are radio emissions that appear temporarily and randomly, making them not only hard to find, but also hard to study.

The mystery stems from the fact it is not known what could produce such a short and sharp burst.

This has led some to speculate they could be anything from stars colliding to artificially created messages.

Scientists searching for fast radio bursts (FRBs) that some believe may be signals sent from aliens may be happening every second. The blue points in this artist’s impression of the filamentary structure of galaxies are signals from FRBs

The first FRB was spotted, or rather ‘heard’ by radio telescopes, back in 2001 but wasn’t discovered until 2007 when scientists were analysing archival data.

But it was so temporary and seemingly random that it took years for astronomers to agree it wasn’t a glitch in one of the telescope’s instruments.

Researchers from the Harvard-Smithsonian Center for Astrophysics point out that FRBs can be used to study the structure and evolution of the universe whether or not their origin is fully understood.

A large population of faraway FRBs could act as probes of material across gigantic distances.

This intervening material blurs the signal from the cosmic microwave background (CMB), the left over radiation from the Big Bang.

A careful study of this intervening material should give an improved understanding of basic cosmic constituents, such as the relative amounts of ordinary matter, dark matter and dark energy, which affect how rapidly the universe is expanding.

FRBs can also be used to trace what broke down the ‘fog’ of hydrogen atoms that pervaded the early universe into free electrons and protons, when temperatures cooled down after the Big Bang.