Golden eagles have reared a chick for the first time in 40 years as part of a ‘rewilding’ program at an estate in the Scottish Highlands using an artificial nest.

The chick marks the first known return of the birds of prey to breed at Dundreggan rewilding estate in Glenmoriston, according to conservation group Trees for Life.

Five years ago an eagle nest was set up by the conservation charity and renowned conservationist, Roy Dennis, in a bid to entice the birds back to the estate.

There was no certainty the project would work, as golden eagles build their own nests in remote and inaccessible places, and are highly sensitive to disturbance.

Conservationists at the Trees for Life charity are celebrating after the chick flew the nest for the first time last week – marking the start of a succesful rewilding. 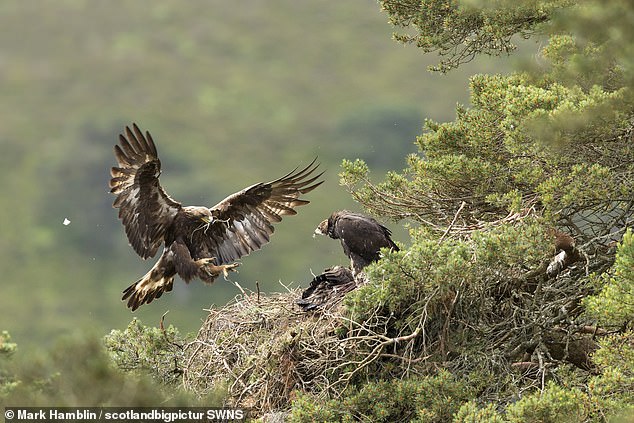 The chick marks the first known return of the birds of prey to breed at Dundreggan rewilding estate in Glenmoriston, according to organisers Trees for Life.

‘This is a rewilding success story beyond our wildest dreams,’ explained Trees for Life’s Dundreggan Manager, Doug Gilbert.

‘I’ve been checking the eyrie regularly since we built it in 2015, hoping to see evidence that the eagles had returned – and now they have.’

Golden eagles may use the same nesting sites for generations, which has led to the team suspecting the birds will be coming back over a long period of time.

‘Four decades without golden eagles breeding or establishing themselves in this part of our wild and beautiful Highland glen have been four decades too long,’ he said.

‘When we built the artificial nest, we knew it was in a good location for eagles because we found the remains of an old nest at the site.

‘We’ve been keeping our fingers crossed for the past five years, and it’s wonderful that our efforts have paid off like this.’

Golden eagles are regularly seen over Dundreggan, but until now there has been no sign of them nesting or setting up a territory at the site.

Golden eagle expert Stuart Benn said the success was ‘terrific news’ and the first time golden eagles have ‘definitely bred’ at Dundreggan since 1980.

‘Eagles are undergoing a marked expansion in the Highlands just now, recolonising ground they haven’t been on for many years and colonising some new areas.’

The golden eagle is the UK’s second-largest bird of prey, after the white-tailed eagle.

It is native to Britain, but centuries of persecution saw it driven into extinction in England and Wales by the mid-1800s.

The bird has been making a slow recovery in Scotland but continues to be threatened by illegal persecution, with reports of them being shot or poisoned. 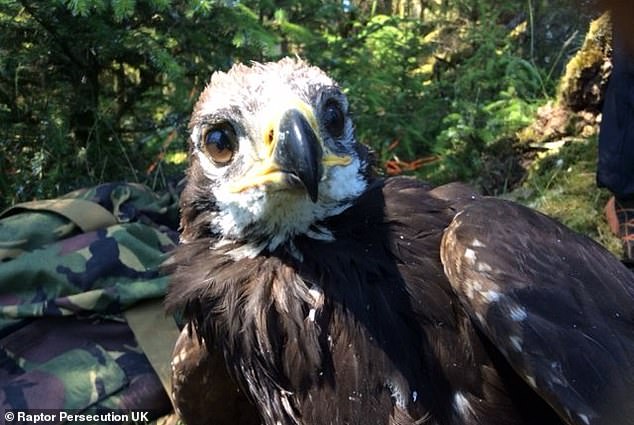 A golden eagle survey, published in 2016, showed Scotland’s population of the birds had increased to 508 pairs, a rise of 15 per cent since the previous survey in 2003.

Trees for Life has been rewilding Dundreggan since it purchased the 10,000-acre former deer stalking estate in 2008.

Dundreggan is home to over 4,000 plant and animal species – including some never recorded in the UK before or once feared extinct in Scotland.

In June, Trees for Life lodged a planning application with Highland Council for the world’s first rewilding centre at Dundreggan, which it plans to open in 2022.

The charity expects to welcome over 50,000 visitors annually – allowing people to explore the wild landscape and learn about the region’s unique wildlife.

Rewilding aims to return land to a more natural state – by allowing nature to take its course.

Activists and plans call for rewilding to be encouraged in order to save essential areas and species.

One site, called Rewilding Europe, calls it giving nature a ‘helping hand’ with their website saying it is about creating the right conditions for it to flourish.

Their site gives a number of examples such as removing dykes and dams to free up rivers or stopping active management of wildlife populations.

The website claims they do this by allowing natural forest regeneration, and by reintroducing species that have disappeared as a result of man’s actions.

‘Then we should step back and let nature manage itself.’

Plans include introducing long-gone or valuable keystone species such as bears, beavers and birds to a region and preserving natural order.