Darwin’s finches ‘unable to mate’ after male birds are infected by parasite that deforms beaks and causes them to sing ‘sub-par songs,’ study finds

Male Darwin finches are having trouble pulling in birds after a parasite has affected their lovesongs.

The iconic bird’s mating powers have taken a nosedive after a fruit fly was accidentally introduced to the Galapagos Islands in the Pacific Ocean.

Males infected with Philornis downsi’s parasitic larvae have been left with enlarged, deformed beaks that produce ‘sub-par’ songs that females do not like. 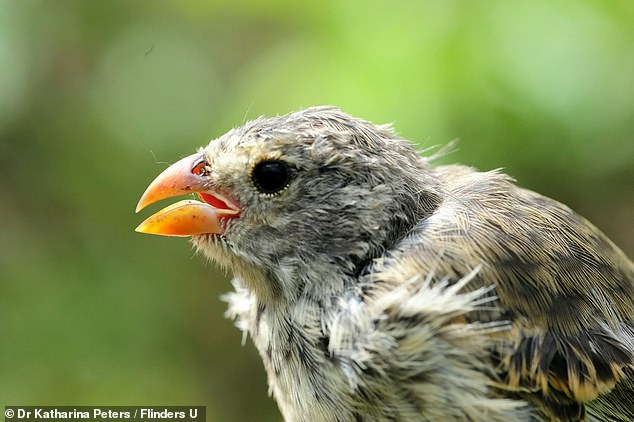 Male Darwin finches are having trouble pulling in birds after a parasite has affected their lovesongs. The parasitic larvae has left the iconic bird with enlarged, deformed beaks

WHAT ARE DARWIN’S FINCHES?

While studying wildlife on the Galapagos Islands in the 19th century, Charles Darwin noticed finches found across different islands were fundamentally similar, but showed variations in their size, beaks and claws.

This led him to conclude that because of the distance between the islands, the finches must have evolved over time to the different environments they lived in and this ultimately inspired his 1858 theory of evolution by natural selection.

Darwin’s finches only live in islands off the coast of mainland Ecuador.

The finches began as one species and started evolving into separate species an estimated three to five million years ago.

A team of ecologists said the finches’ beaks were an adaptation to the deadly parasite colonising their once pristine habitat.

The researchers showed that Darwin’s finch males whose beaks and nostril, or nares, have been damaged by the parasitic invasion are producing ‘sub-par song.’

The group of 15 bird species were named after renowned British biologist Charles Darwin who visited the archipelago 621 miles west of the coast of Ecuador.

His observation of unique species found in the Galapagos inspired his world-famous theory of evolution in his 1859 book On the Origin of Species.

Prof Kleindorfer said: ‘In our newest research, we show that Darwin’s finch males whose nares have been deformed by the parasite had greater vocal deviation – which females didn’t like during mate choice – and had songs with lower maximum frequency.

She added this also ‘confused the species identity of the singer.’

Study co-author Berkeley Adjunct Professor Frank Sulloway of the University of California, US, warned critically endangered medium tree finches with enlarged naris size were producing songs that were indistinguishable from song of other finches. 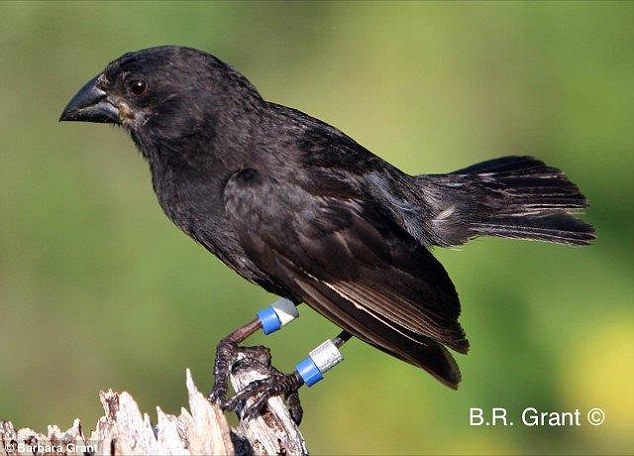 The researchers showed that Darwin’s finch males whose beaks and nostril, or nares, have been damaged by the parasitic invasion are producing ‘sub-par song’ and mating difficulties

He said: ‘Given that small tree finch and medium tree finch are hybridised on Floreana Island, we suspect that this blurred species-signalling function of song may be partly to blame for the observed reverse speciation that is currently occurring.

‘This research is evidence that parasite-induced morphological deformation can disrupt host mating signal with devastating effects on bird populations.

Darwin’s finches captivated the British naturalist during his Galápagos research in the 1830s.

They became the first vertebrate system to provide compelling field-based evidence for evolution of natural selection and became known as Darwin’s finches in the 20th century.