Home » Science » Phones know when you're drunk from your wobbly walk

It is the perfect drinking companion for those who never seem to know when they have had one too many.

A smartphone app could soon tell people when they are drunk, based on the slightest stagger or sway in their walk.

From someone walking just 10 steps, a phone can detect if they are at the UK drink-drive limit with almost 93 per cent accuracy, researchers have discovered.

That could trigger an alert to let people know it is time to go home before they make a fool of themselves. 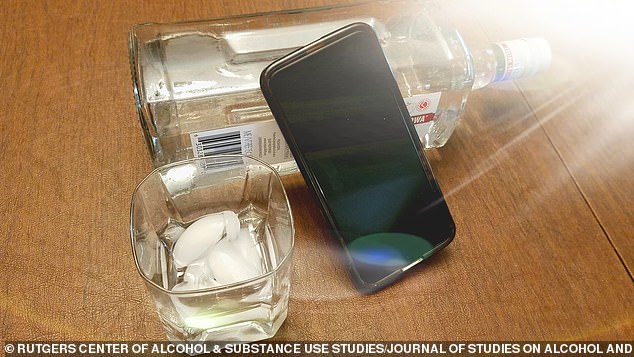 From someone walking just 10 steps, a phone can detect if they are at the UK drink-drive limit with almost 93 per cent accuracy, researchers have discovered

Dr Brian Suffoletto, first author of the study from the University of Pittsburgh, said: ‘We all know from the movies and cartoons that, when someone is drunk, they tend to wobble a bit walking down the street.

‘Actually walking and balancing is pretty complex, so it’s a good sign of impairment.

‘Smartphones can pick up changes in gait, and could in future send alerts to someone’s partner or friend that they have had too much to drink and need to be picked up to go home.

‘Or someone’s phone could ping to let them know when to leave before they do something they might regret the next day.’

The technology works by detecting people’s movements forwards and backwards, up and down and from side to side as they walk.

Researchers tested it on 17 people, aged 21 to 43, who were given a vodka and lime juice drink over an hour until they reached the UK drink-drive limit of 80 milligrams of alcohol per 100 millilitres of blood.

These people were kept in the lab for at least seven hours until they sobered up, and asked to walk 20 steps forwards and backwards in a straight line every two hours.

The major changes in people’s walking when they were drunk appeared to be that they lurched, with suddenly fast forward steps, or swayed, with their feet going sideways rather than straight forward.

The researchers were able to record 761 steps taken when people were above the limit, and 210 when they were below it.

Estimating when people were drunk, they got it right every time for 15 out of 17 of them.

The smartphone, which was strapped to people’s lower backs on a belt, got it wrong at least once for seven people, in thinking they were intoxicated when they were not.

But this was less important, as the main purpose was to pick up the drunk people, and the overall accuracy is given as 92.5 per cent.

The research, described in the Journal of Studies on Alcohol and Drugs, is hoped to lead to a smartphone which people can take out to the pub with them within a year.

The researchers, who checked their app worked using blood and breath alcohol readings, are now analysing whether it works using a smartphone carried in someone’s hand or pocket.

Dr Suffoletto said: ‘Research suggests people do not realise they are drunk up to half of the time that they are.

‘We wanted to design something which people would use, and 20 steps to detect if someone is drunk is about the right distance for someone walking from the bar to the bathroom to get an alert.’