Home » Science » Phubbing: Study warns of ignoring your friends to look at your phone

Are YOU guilty of ‘phubbing’? People who regularly snub their friends to look at their phones are more likely to be socially anxious and depressed, study finds

Many of us are guilty of looking at our phones in the company of loved ones – an act known as ‘phubbing’.

Now, a study reveals that so-called ‘phubbers’ who use their phone while ignoring their friends are more likely to have certain mental health issues.

Researchers found depressed people ‘phub’ their friends more frequently – either in a social situation such as in a pub or a cafe – than those without depression. 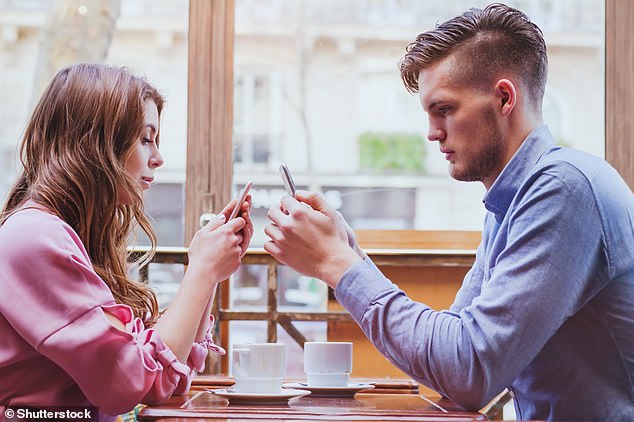 Devices can lead to a form of social rudeness called phone snubbing, or phubbing – the act of ignoring one’s companions to pay attention to a phone (stock image)

Phubbing is a term created by the combination of the words ‘phone’ and ‘snubbing’.

Two people may also phub at the same time – known as double phubbing.

Phubbing a friend is known as friend phubbing or Fphubbing.

Although previous studies have examined phubbing in many different relationships – like between a girlfriend and boyfriend or parents and children – little is known about friend phubbing, they claim.

The study has been led by Juhyung Sun, currently a doctoral candidate at the University of Oklahoma, who was struck by the amount of phubbing going on in day-to-day interactions.

‘I observed that so many people use their phones while they are sitting with their friends at the cafe, any dining time, regardless of the relationship type,’ she said.

‘People are really sensitive to their notifications. With each buzz or sound, we consciously or unconsciously look at our phones.’

For the study, the researchers recruited 472 undergraduate students with an average age of 19.

Participants were asked to indicate duration and usage patterns of daily smartphone use (ranging from less than 10 minutes to more than five hours) and what they used their phone for the most (such as text messaging, calling, gaming or taking photos).

Friend phubbing was determined using a modified version of the Generic Scale of Phubbing developed in 2018.

Meanwhile, the Center for Epidemiologic Studies Depression Scale (CES-D scale) developed by Radloff (1977) was designed to measure levels of depression.

It includes 20 items, such as ‘During the past week I felt depressed’ on a 4-point Likert scale ranging from 1 (rarely or none of the time) to 4 (most or all of the time).

Snubbing one’s friends (Fphubbing) can have serious repercussions on relationships, the authors say

Results showed that those with higher levels of depression, social anxiety and neuroticism were significantly related to greater friend phubbing

Meanwhile, agreeableness – one of the big five personality traits – was negatively related to friend phubbing.

Agreeableness is a personality trait that can be described as cooperative, polite, kind and friendly, and so it came as no surprise that it was linked with low phubbing levels.

The researchers also said phubbing is more likely in the presence of three or more people.

‘It’s ironic that while so many people believe that phubbing behaviour is rude, they still do it,’ Sun said.

‘A majority of people phub others, and in a group, it may seem OK, because it’s just me, the speaker doesn’t notice I’m using the phone. The number of a people in a group can be one reason.’

If you think you may be a phubber, disabling or turning over a phone can indicate a show of respect for a situation and focus on a person, according to Sun.

‘That, too, is a signal – I am listening to what you are saying, this meeting is important and I am focusing on you,’ she added.

The study has been published in the journal Behaviour & Information Technology.

SIGNS THAT YOU ARE A PHUBBER

The term phubbing was coined in 2013 and is a portmanteau of the words ‘phone’ and ‘snubbing’.

It is defined as ‘the act of snubbing someone in a social setting by looking at your phone instead of paying attention.’

There is even a Stop Phubbing campaign group, which started in Australia and was set up to address the problem.

Here are the signs that can help you address whether you’re a phubber:

– You fill gaps in conversation by checking your phone

– When you’re watching TV together, you go on your phone in the ad break