Pig-tailed macaques are acting as an unexpected form of pest control on oil palm plantations, hunting down and eating rats that would otherwise damage crops.

The monkeys are mainly fruit-eaters, but appear to like hanging out on the plantations and supplementing their diets with tasty rodents.

Their efforts are good news for palm oil producers, as they have the potential to save more than £500,000 in rat-based crop damage each year.

Palm oil is the most widely used vegetable oil and is found in many processed and packaged foods.

The surprising findings may redeem the macaques’ image — with the monkeys having previously held a reputation instead of being crop-raiding pests themselves. 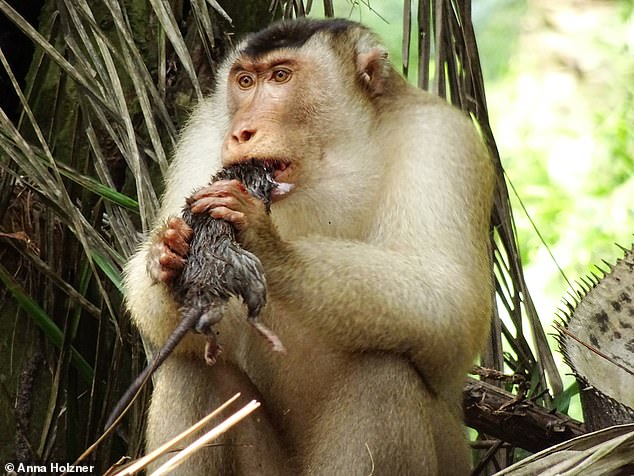 Pig-tailed macaques are acting as an unexpected form of pest control on oil palm plantations, hunting down and eating rats that would otherwise damage crops

WHAT ARE SOUTHERN PIG-TAILED MACAQUES?

The Southern pig-tailed macaque — or Macaca nemestrina — is a medium-sized macaque native to Indonesia, Malaysia and southern Thailand.

Locally, it is known as the ‘beruk’.

However, a new study has shown that they enjoy consuming rats.

This habit is beneficial in oil palm plantations, where rats are considered to be a significant pest.

Zoologist Nadine Ruppert of the Universiti Sains Malaysia and colleagues have been studying the ecology and behaviour of Southern pig-tailed macaques in and around the Segari Melintang Forest Reserve in Peninsular Malaysia since 2016.

They found that the monkeys seemed to like spending time in the nearby oil palm plantations, which are found across much of the macaques’ home range.

The team learnt that macaques living on the plantations ate a diet mainly composed of oil palm fruit — with one group eating more than 12 tons of the produce in year.

This equates to around 0.56 per cent of the total oil palm production across the monkey’s entire home range.

However, the damage done by the macaques is balanced out by their other choice of delicacy — rats that would otherwise eat much more of the fruit.

‘I was stunned when I first observed that macaques feed on rats in plantations,” said Dr Ruppert.

‘I did not expect them to hunt these relatively large rodents or that they would even eat so much meat.’

‘They are widely known to be [fruit-eating] primates who only occasionally feast on small birds or lizards.’ 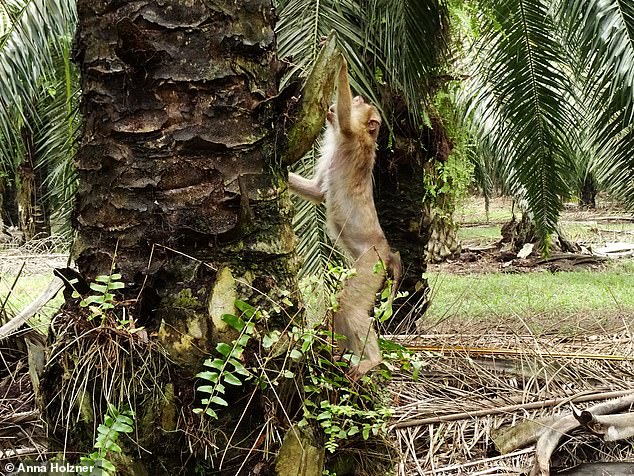 The monkeys are mainly fruit-eaters, but appear to like hanging out on the plantations and supplementing their diets with tasty rodents 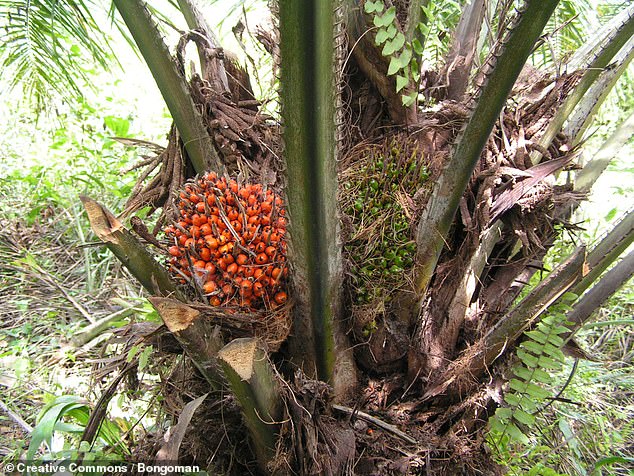 Palm oil — made from the fruit of the oil palm, pictured here in a stock image — is the most widely used vegetable oil and is found in many processed and packaged foods

Unchecked, the rats are thought to be responsible for losses of up to 10 per cent of oil palm fruit production — so the macaques’ grisly eating habits are good for the local farmers.

‘By uncovering cavities in oil palm trunks where rats seek shelter during the day, one group of pig-tailed macaques can catch more than 3,000 rats per year,’ said paper author and primatologist Anna Holzner, of the University of Leipzig, Germany.

The researchers believe that macaques visiting that plantations have the potential to reduce rat numbers by more than 75 per cent.

This could even allow them to be used to replace the chemicals typically relied on for rodent pest management.

In fact, the team estimate that the monkey’s elimination of the rat pests  could reduce crop damage by seven per cent of overall production. 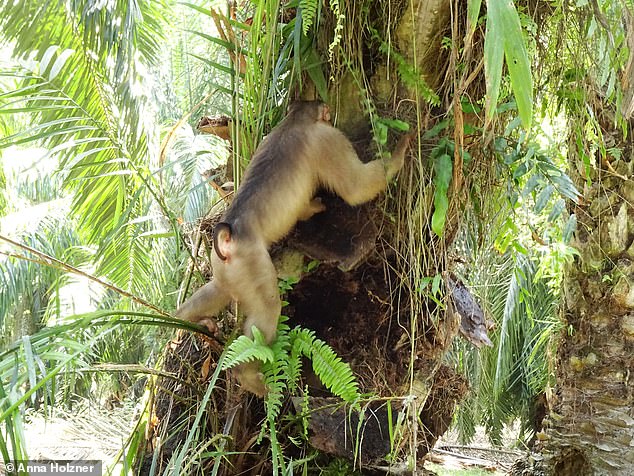 ‘Our results will encourage both private and public plantation owners to consider the protection of these primates and their natural forest habitat in and around existing and newly established oil palm plantations,’ added paper co-author Anja Widdig.

‘In collaboration with local palm oil companies and NGOs, we will work towards the realisation of a plantation design that maintains viable macaque populations and higher levels of biodiversity via wildlife corridors,’ she added.

This will be done ‘while increasing the plantations’ productivity and sustainability by effective and environmentally friendly pest control.’

‘This ultimately can lead to a win-win situation for both biodiversity and the oil palm industry.’