Pigs can recognise human faces: The farm animals use our mouths and noses to tell whether they’re looking at the front or back of our heads

Pigs can recognise whether they are looking at the front or back of a human head using key features like our mouths and noses as cues.

In visual tasks, the animals were able to pick out whether they were looking at someone’s face or the back of their head with up to 80 per cent accuracy. 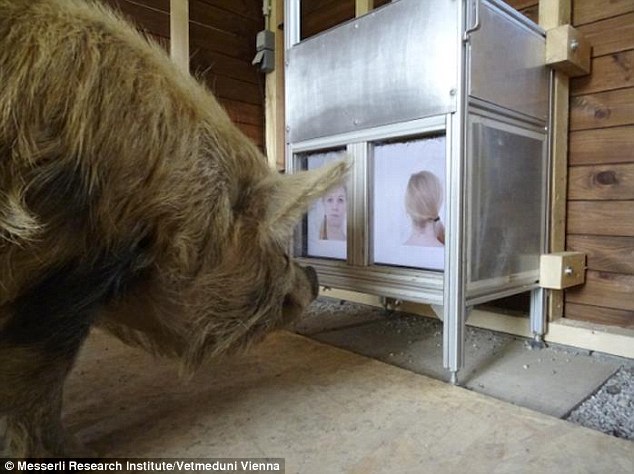 Pigs can recognise whether they are looking at the front or back of a human head using key features like our mouths and noses as cues. Researchers used computer monitors that showed pictures of the front and backs of heads for the study (pictured)

In the first of two studies from researchers at the Messerli Research Institute in Vienna, Austria, two groups of pigs were trained to discriminate between the front and back of the heads of ten people via photos on a computer screen.

The animals received a food reward if they chose either the front or the back view, depending on the group they were assigned.

The pigs proved to be remarkably capable of learning to choose the right image, handling the task far better than previous research would suggest.

The two groups of pigs were then shown either 16 new faces or 16 new photos of the backs of people’s heads.

They were then presented with altered versions of the photographs to make sure they weren’t simply remembering specific details of each image.

The animals mastered this task with no drop in performance, suggesting that the pigs used a general concept of the view of either the front or back of heads. 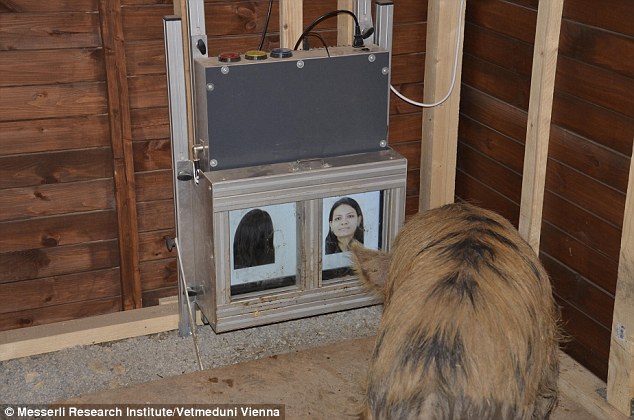 In the first of two studies from researchers at the Messerli Research Institute in Vienna, Austria, two groups of pigs were trained to discriminate between the front and back of the heads of ten people via photos on a computer screen

This visual concept was formed during training, meaning the pigs did not simply store the pictures in their memory.

The final tests, in which the face was inverted or certain facial features were altered, were designed to more determine the nature through which the animals learned.

‘In this test, comprising a total of 80 tasks, we reviewed the spontaneous discrimination of the pictures to provide clues as to the visual concepts formed during the training,’ study coauthor Dr Ludwig Huber said.

This task was more difficult for the ‘front group’ because the features they used to pick out the right face – such as the eyes and mouth – were difficult to determine when warped compared to the backs of people’s heads.

The Back group was correspondingly more successful in making the correct choice and identifying the trained image.

With the exception of the final test series, they made the correct first choice in more than 80 percent of the combinations shown.

IN WHAT OTHER WAYS HAVE PIGS DEMONSTRATED INTELLIGENCE?

Pigs are surprisingly intelligent animals, with some scientists suggesting they are cleverer than dogs and cats.

They have brilliant long-term memories and find mazes an easy task.

Scientists have even trained them to use joysticks to move a cursor around a computer screen for a reward.

They can also learn tricks — from opening cage doors to jumping through hoops.

Pigs boast an emotional intelligence shared by few other creatures.

They are curious and capable of empathy, with the ability deliberately deceive other pigs and even anticipate needs and intentions.

The results for the Front group, by contrast, showed no preference, choosing the correct photo only 50 per cent of the time.

This could indicate that both groups base their decision on certain features.

‘Especially those animals that were trained to choose the back view might have memorised the eyes as a distinguishing feature and therefore chose the other picture,’ Dr Huber said.

The same could hold true for the group trained to choose the front view.

If the feature that was used as a discriminatory cue is missing or changed, then the pigs will decide differently.

‘The result is therefore an important indication that pigs, contrary to previous studies, do in fact possess visual discrimination abilities, and on top of this also manage open-ended categorisation,’ explains Dr Huber.

The pigs showed quite different preferences as to the discriminatory cues used, which indicates a very flexible, individual approach to solving specific tasks.

These findings suggest that stimulating different senses, especially visual, constitutes a kind of cognitive enrichment that could play an important role in improving the welfare of domestic pigs living in housing systems.