Is this what the PS5 will look like? New renders show Sony’s next-generation console could have a futuristic X-shape design as rumours suggest the launch is ‘just weeks away’

Leaked renders show a super slick design for what could be Sony’s highly anticipated upcoming console, the PlayStation 5.

The renders are based on an image of the console that was posted on the online message board 4chan by an anonymous leaker.

The Twitter user @FalconDesign3D, posted: ‘Did a PS5 rendering based on the latest leaks of its design.’

The images show a slick black console in a rhomboid shape in two layers laid asymmetrically on top of each other with two wedges peeping out either side of the bottom layer.

According to the leak on which the detailed sketches are based, the new Sony gaming console will be unveiled on February 5 and go on sale this coming October. 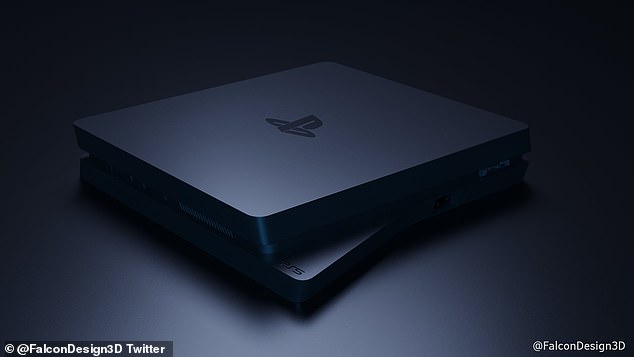 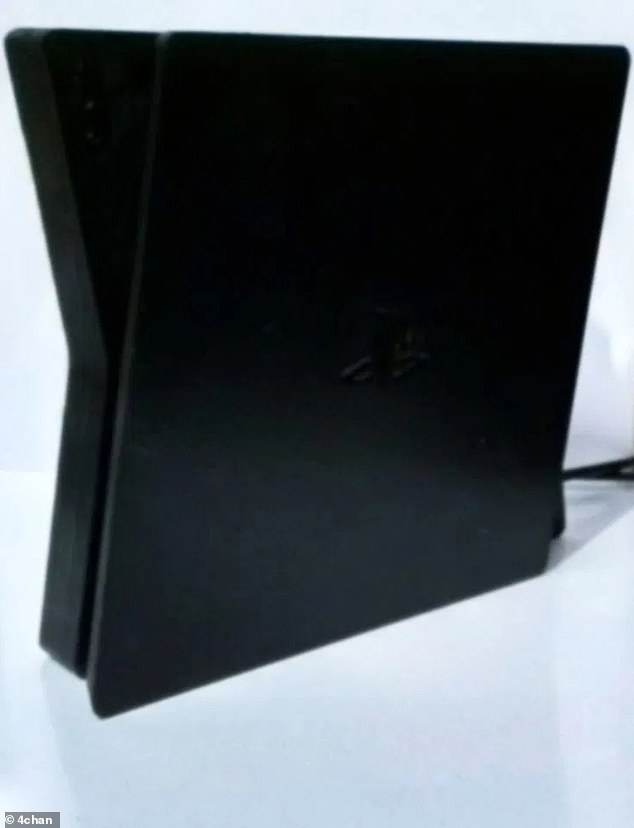 One of the wedges is the power button, and the other features the PS5 logo, which was revealed at the CES show in Las Vegas earlier this month.

Twitter users showed a mixed reaction to the design.

@ChillyNelson posted: ‘I think they’re throwing out God awful designs to throw us off the trail… can’t be this ugly.’

User @jdmax1210, on the other hand, replied: ‘I’m really digging this design tbh. Hope it looks like this.’

@Lilmanike said: ‘Not gunna lie, I can see Sony using this design. Very similar to the PS4’s design but with more character.’ 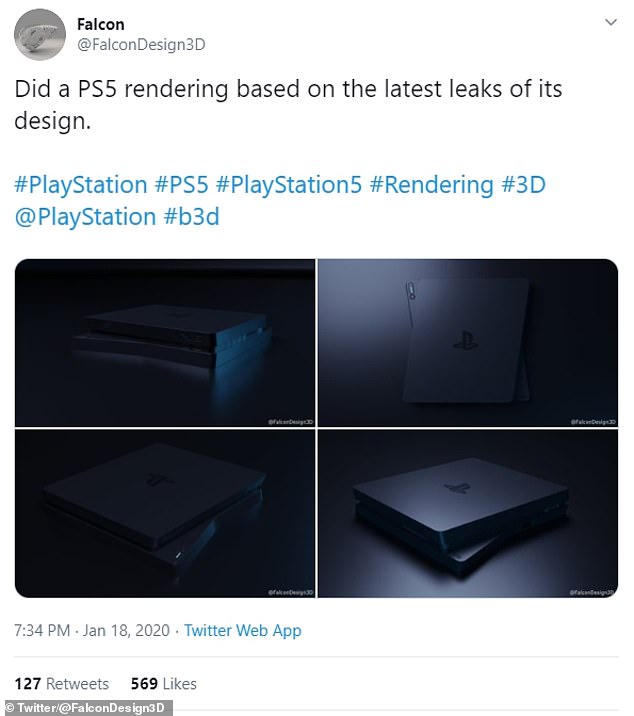 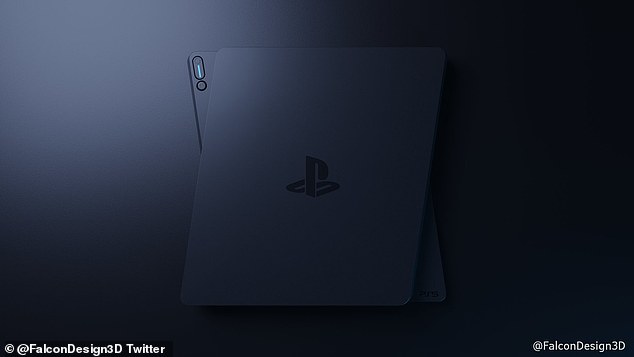 Viewed from the top the renders of the PS5 are X-shaped, reminiscent of Microsoft’s Xbox

These images don’t confirm the appearance of the new console but are artistic renders based on the ‘leaked’ image.

The leak, which was posted on 4chan earlier this month, was accompanied by a selection of details on the new console, which have since been posted on Reddit. 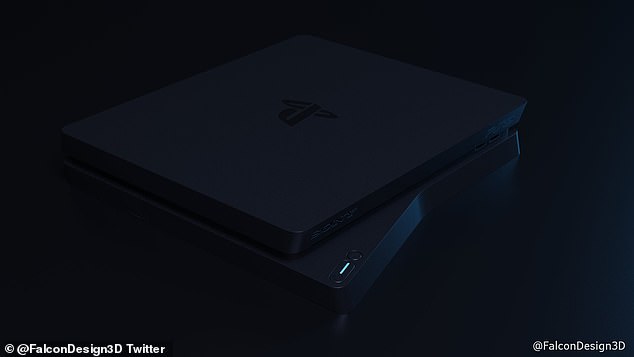 These renders won’t be exactly the same as the final design, which is rumoured to be revealed by Sony on February 5

The anonymous user claims Sony will reveal the console design, controller, user interface and specs at a press event at Sony Hall in New York on February 5.

All PlayStation games from all five PlayStation platforms (PS1, PS2, PSP, PS3 and PS4), will be compatible on PS5, making it an ‘ultimate’ PlayStation console, the post says.

‘Sony (for a limited time) will bundle a 3-month PS Now subscription with the PS5 in select regions in an effort to promote the service to many new owners,’ the post says.

PlayStation Now – the console’s cloud gaming subscription service – will play a ‘vital role’, as will Remote Play, which lets users transmit the video game display to a smartphone, tablet or PC. 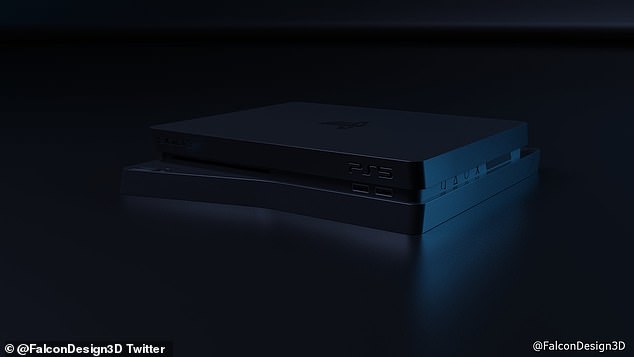 Backwards compatiblty with all PS4 games is also a big feature – users will easily transfer their PS4 games to the PS5 if those games are downloaded, the leak claims

PS5 will be released in October 2020 in one mode only, the source claims, with no ‘pro’ model at launch.

Marketing buzz words for the console’s features include ‘little to no load times’, ‘blazing fast downloads’, ‘immersive controls’, ‘modular installs for games, download whatever’, ‘disc drive included’, and ‘download the games, or stream the games as an option’, it adds.

Pre-orders for the console will start on the same day as the press event in select regions.

‘It’s time to play will be PlayStation’s new slogan for the PS5 and the whole brand, the leak says.

While the identity of the leaker is unknown, what’s promising is that the very same slogan has been added to the bio of PlayStation Europe’s Twitter account in the last few days – a strong indication that at least some of these details are true.

The combination of image and specs is also a promising sign, based on previously revealed details, of the official unveiling date. 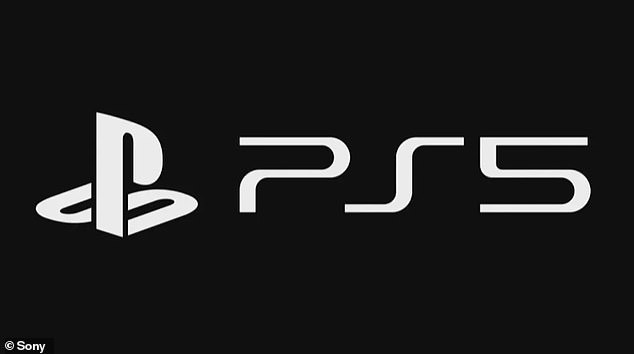 Last Thursday, video game developer David Scott Jaffe said that the PS5 reveal is ‘less than four weeks away’ – which would put its reveal date on February 13 at the very latest.

‘Sony knows hard core gamers are hanging on every scrap of info and know that just ‘cause MSFT [Microsoft] dominates the conversation at the moment, that’s an easy thing to change when they are ready to reveal (assuming the reveal is good),’ Jaffe tweeted.

Jaffe worked on the Twisted Metal and Good of War video games – both Sony exclusives.

He also said the PS5 is ‘the worst kept secret in games right now’ – suggesting the validity of these new leaks.

The new render from @FalconDesign3D is strikingly different from renders revealed last year of an unusual V-shaped prototype, supposedly from the Developers Kit of the PlayStation 5. 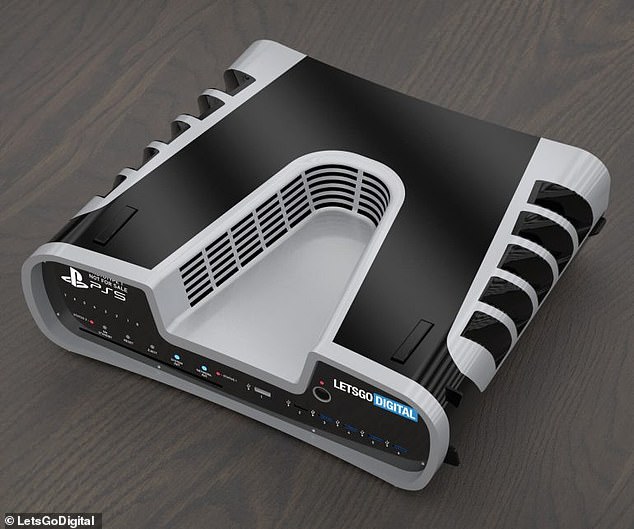 Leaked sketches from last year by LetsGoDigital gave gamers an idea of what to expect for the PS5, although this looks nothing like the new ‘leaks’ of the console

THE HISTORY OF PLAYSTATION

1988: Sony and Nintendo originally began discussions to develop a CD-ROM add-on for the Super Nintendo Entertainment System. The idea didn’t come to fruition before the SNES was released in 1990.

1991: At the Consumer Electronics Show in Chicago, Sony revealed a prototype SNES with a built-in CD-ROM drive – now known as the ‘SNES PlayStation’. However, only the next day Nintendo announced it had broken its deal with Sony, opting instead to partner Philips, Sony’s rival in consumer electronics.

1994: The original PlayStation launched in Japan on December 3 and in the US and Europe the following year.

2000: Sony launched the PlayStation 2 a year before its other competitors, Microsoft’s Xbox and the Nintendo GameCube, and became the most successful home console in the world, selling 155 million units by 2012.

2006: Sony released the PlayStation 3, the first console in the series to introduce the use of motion-sensing technology.

2013: Sony released the PlayStation 4 (PS4), a next-generation console designed to compete with the Xbox One.

2020: Sony plans to release the PS5 around Christmas next year.