A lavish home built by two former slaves in ancient Pompeii has been restored to its former glory before being buried in volcanic ash by Mount Vesuvius in 79 AD.

Priapus is the god of fertility and abundance, and the imagery is thought to have symbolized the wealth the men had accumulated.

The men, Aulus Vettius Restitutus and Aulus Vettius Conviva, obtained their riches through the wine trade after they were set free and constructed the ornate house that doubled as a brothel.

Visitors are now welcome to tour the home to see firsthand what life was like in the doomed Roman City. 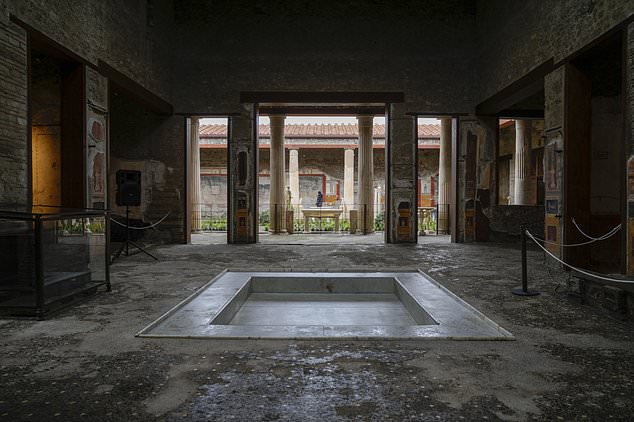 The amazing home owned and built by two former slaves more than 1,900 years ago in Pompeii has been restored. A view of the impluvium, the rain water-catchment pool in the atrium of the House of Vetti

Pompeii´s director, Gabriel Zuchtriegel, said: ‘The House of the Vetti is like the history of Pompeii and actually of Roman society within one house.

‘We’re seeing here the last phase of the Pompeian wall painting with incredible details, so you can stand before these images for hours and still discover new details,’ the archaeological park´s energetic director told The Associated Press ahead of the public inauguration.’

The home was excavated between late 1894 and early 1896, and it covers an area of more than 11,000 square feet in the northwestern section of Pompeii.

In the living room, known as the Hall of Pentheus, a fresco depicts Hercules as a child, crushing two snakes, illustrating an episode from the Greek hero’s life. 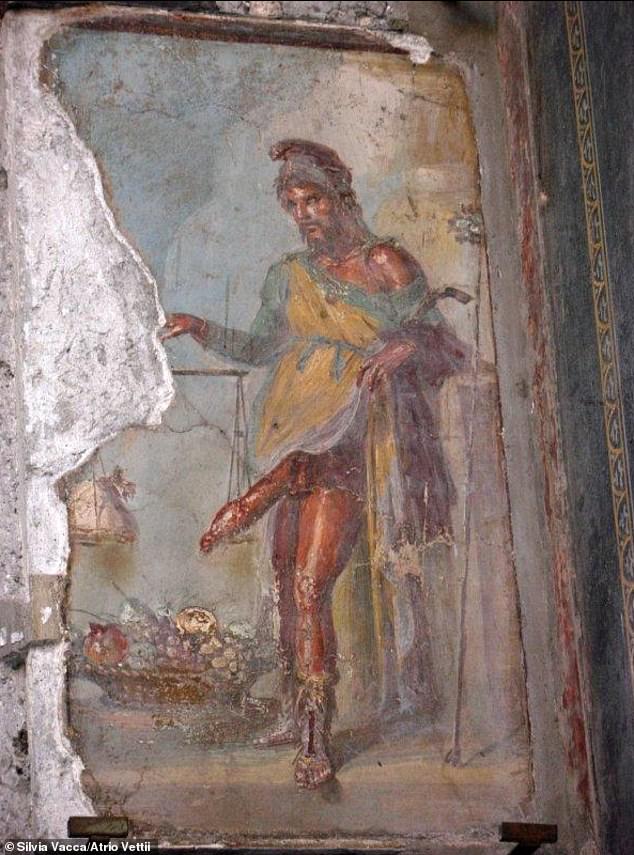 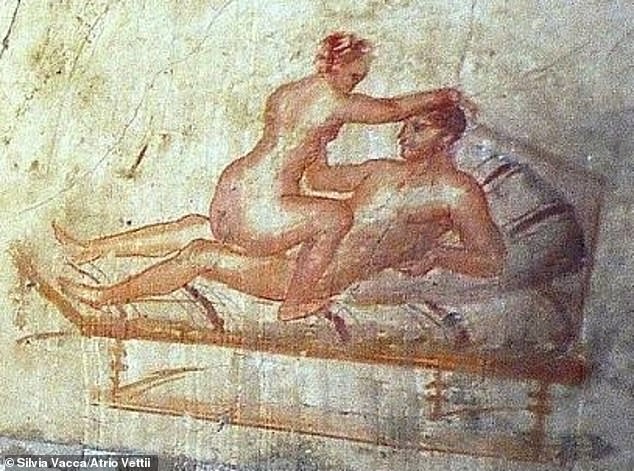 According to mythology, Hera, the goddess wife of Zeus, sent snakes to kill Hercules because she was furious that he was born from the union of Zeus with a mortal woman, Alcmena.

Archaeologists theorize that this image was chosen by Aulus Vettius Conviva and Aulus Vettius Restitutus to compare their own life stories to the figure of Hercules, who overcame challenge after challenge in his life

Ornamental marble baths and tables surround the garden, and a fountain sits in the courtyard.

Archaeologists also uncovered an inscription in Latin next to the image of Priapus, which includes a Greek name for women, who are described as having ‘nice manners.’

The home was also a place of worship, which is shown in portraits of couples copulating and of deities associated with fertility. 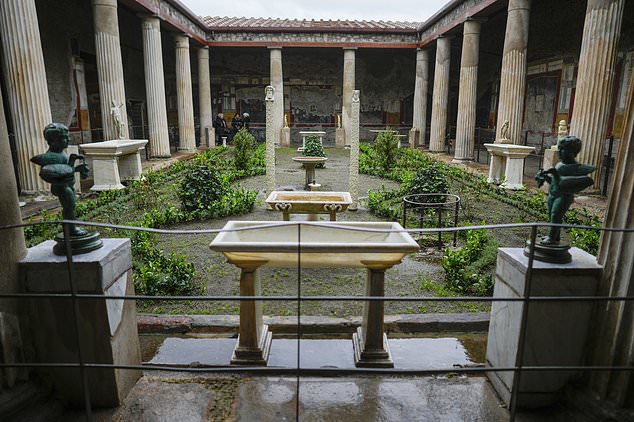 Ruins of the home were first uncovered between late 1894 and early 1896. Visitors have now been welcomed to tour inside the newly restored home that features a garden in the courtyard 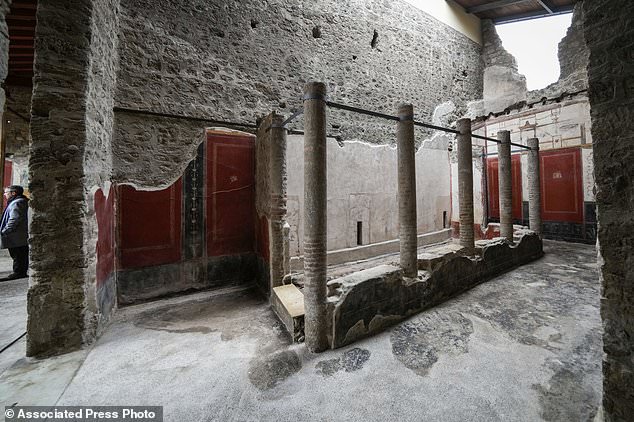 There is a small room near the kitchen that is believed to have been a brothel. Pictured is a  view of rooms that were reserved for women

Pompeii´s architect director of restoration work, Arianna Spinosa, called the restored home ‘one of the iconic houses of Pompeii. The residence ‘represents the Pompeiian domus par excellence, not only because of the frescoes of exceptional importance, but also because of its layout and architecture.’

Two thousand years ago, Pompeii, which lies 14 miles southeast of Naples, was a buzzing city with some 15,000 residents before the eruption of Mount Vesuvius destroyed it on August 24, 79 AD.

The eruption is thought to have killed 16,000 people in Pompeii and surrounding towns, making it one of the most destructive volcanic eruptions in history.

An administrator and poet called Pliny the younger watched the disaster unfold from a distance, and his letters describing the horrific event were found in the 16th century. 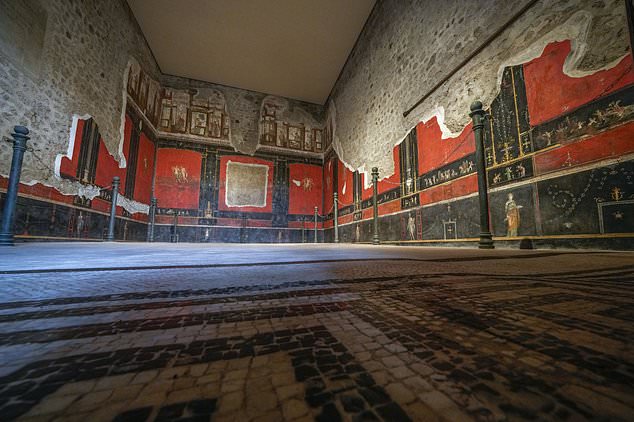 A view of the frescoes and mosaics of the ‘Room of the Cupids,’ which was also used as the dining room. The frieze depicts cupids selling flowers and perfumes and as workers who sell flowers, make wine and work gold 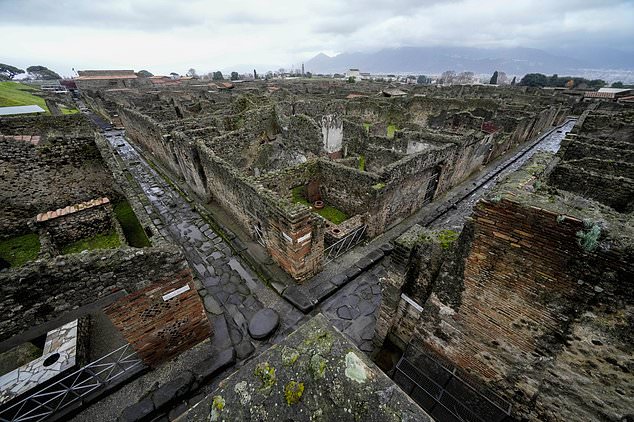 A view of the Pompeii Archeological Park, near Naples, southern Italy. Archaeologists are still working in the region and uncovering new discoveries

His writing suggests that the eruption caught the residents of Pompeii unaware.

Pliny said a column of smoke ‘like an umbrella pine’ rose from the volcano and made the towns around it as black as night.

People ran for their lives with torches, screaming and weeping as ash and pumice fell for several hours.

While the eruption lasted for around 24 hours, the first pyroclastic surges began at midnight, causing the volcano’s column to collapse.

An avalanche of hot ash, rock and poisonous gas rushed down the side of the volcano at 124 miles per hour, burying victims and remnants of everyday life.

Hundreds of refugees sheltering in the vaulted arcades at the seaside in Herculaneum, clutching their jewelry and money, were killed instantly.

This event ended the life of the cities but at the same time preserved them until rediscovery by archaeologists nearly 1700 years later.

The excavation of Pompeii, the industrial hub of the region and Herculaneum, a small beach resort, has given unparalleled insight into Roman life.

Archaeologists are continually uncovering more from the ash-covered city.