Earth to Trump! President gets fact-checked from space after saying all-female spacewalk was ‘first ever female spacewalk’ during his live call to the two American astronauts aboard the ISS

President Donald Trump was fact-checked from space today when he contacted the International Space Station to commend Jessica Meir and Christina Koch for completing the all-female spacewalk outside of the craft, but mistakenly congratulated the two for being the’ first ever female spacewalkers’.

There was a delay before anyone from the space station could speak, but Meir chimed in and made it clear that she and Koch are not the first female spacewalkers – the first woman spacewalk took place in 1984 and 14 more have since followed.

President Trump addressed Koch and Meir while sitting at a table between his daughter Ivanka Trump and Vice President Mike Pence, surrounded by NASA officials and a group of Girl Scouts at the White House.

‘This is the first time for a woman outside of the space station,’ Trump said staring into the camera.

He later added: ‘You are amazing people; they’re conducting the first ever female spacewalk to replace an exterior part of the space station.

‘They’re doing some work, and they’re doing it in a very high altitude — an altitude that very few people will ever see.’

Meir can then be heard correcting the president, explaining that today marked the first time there has been two women outside at the same time. 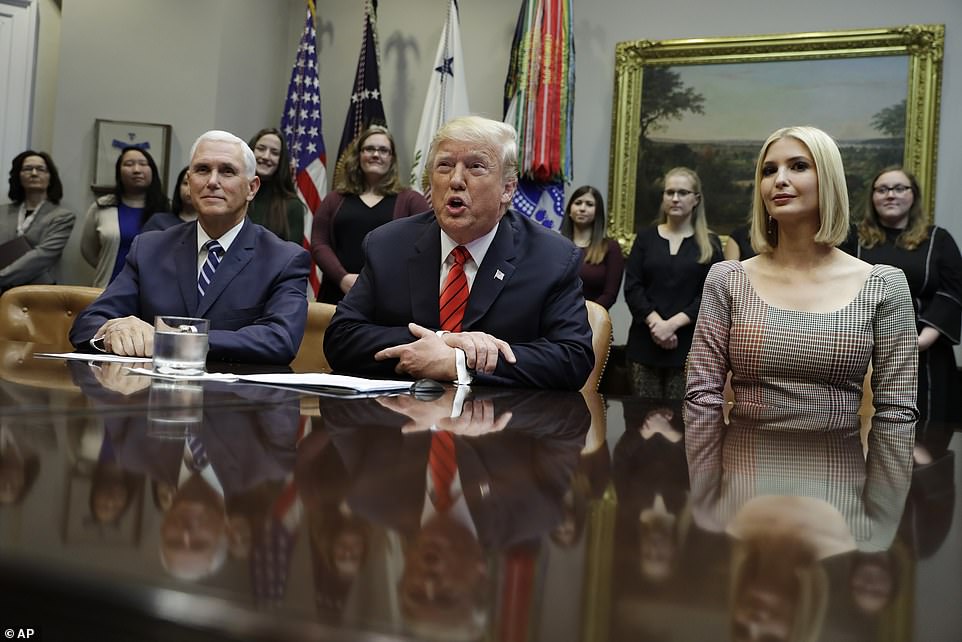 US President Donald Trump (center) put in a congratulatory call to astronauts Jessica Meir and Christina Koch, but mistakenly noted that this was the first time a female has ever ventured outside of the craft

President Trump: ‘I just want to congratulate you, what you do is incredible. You are very brave people. I don’t think I would want to do it, but I must tell you that you are amazing people.’

‘They are conducting the first ever female spacewalk to replace an exterior part of the space station.’

‘They’re doing some work and they are doing it in a very high altitude, an altitude that very few people will ever see.’

‘Congratulations to Christina and Jessica on this historic event.’

‘This is truly historic and you are right now on television all over the world, so don’t get nervous.’

‘What would you like to tell everyone listening and watching today, especially young girls and women who are interested in space.’

Jessica Meir: ‘We don’t want to take too much credit because there have been many other female spacewalkers before.’

‘This is the first time that there’s been two women outside at the same time.’

‘We don’t want to take too much credit because there have been many other female spacewalkers before,’ she said.

‘This is the first time that there’s been two women outside at the same time.’

The first woman to complete a spacewalk was Russian astronaut Svetlana Yevgenyevna Savitskaya in 1984 – a total of 15 women have ever spacewalked, including Meir and Koch.

Regardless of the blunder, Koch and Meir will still go in history books for the first all-female spacewalk.

The duo left the International Space Station at 07:38am ET (12:38pm BST) today to begin the first all-female spacewalk ever.

Their job was to fix a broken part of the station’s solar power network.

The pair moved to the space station’s P6 truss at the far end to begin work, where they replaced a failed power controller.

The spacewalk is being streamed live by NASA and is a landmark moment for female astronauts and scientists.

An all-woman spacewalk had been planned for March but one of the astronauts was replaced by a man because her space suit didn’t fit.

The first American female spacewalker, who carried out her own mission 35 years ago, Kathy Sullivan, said she was delighted by today’s milestone.

And a NASA spokesperson said: ‘Our achievements provide inspiration to students around the world, proving that hard work can lead you to great heights, and all students should be able to see themselves in those achievements.’

Koch and Meir replaced battery units called BCDUs after they failed to provide increased power to the ISS.

This failure has not significantly impacted the crew or its mission but needs to be repaired nonetheless. 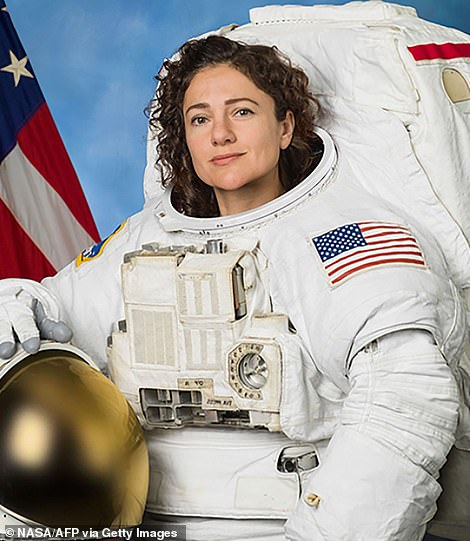 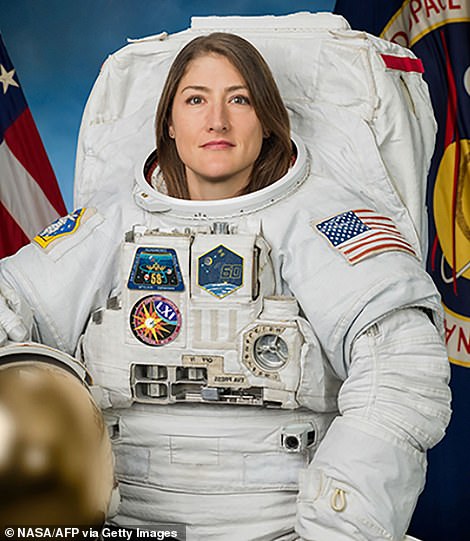 Meir (right) chimed in to clarify that there has been ‘many other female spacewalkers before’ – the first woman to spacewalk took place in 1984 and 14 more have since followed. Her and Koch (left) participated in the first ever all-female spacewalk

According to NASA, BCDUs regulate the charge for batteries that draw energy from the station’s solar collectors to provide power as the station orbits at night.

Koch, who is also set to complete the longest single spaceflight by a woman as she remains in orbit until February 2020, said gender milestones like the spacewalk were especially significant.

‘There are a lot of people who derive motivation from inspiring stories from people who look like them, and I think that it´s an important aspect of the story to tell,’ she told a NASA briefing in Houston this month. 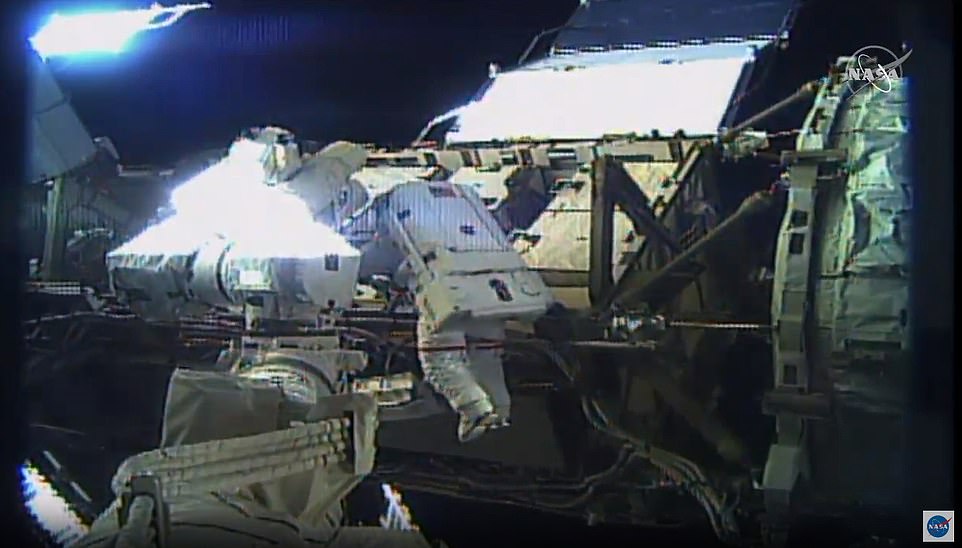 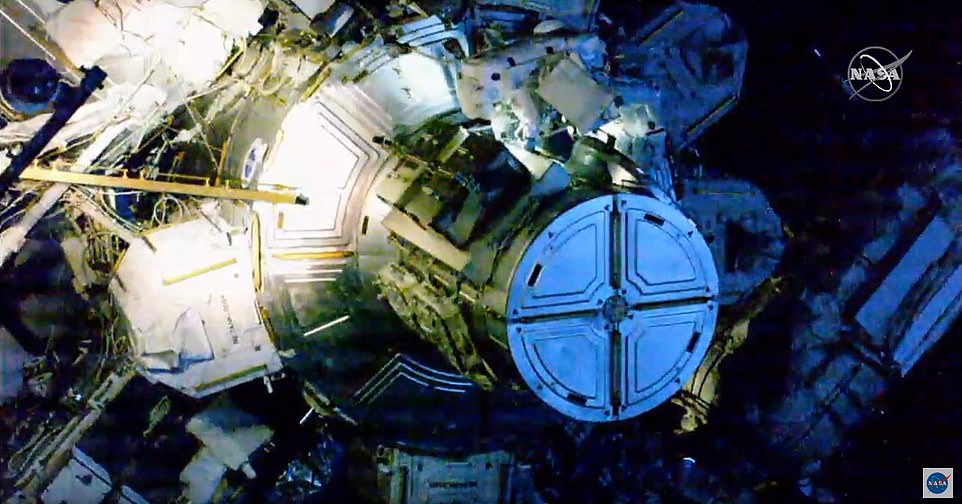 ‘What we´re doing now shows all the work in the decades prior from all the women that worked to get us where we are today,’ Meir added.

Koch, who was slated for the earlier spacewalk, will be making her fourth walk and will become the 14th woman ever to walk in space. Today will mark Meir’s first spacewalk. The ISS has seen more than 200 spacewalks since 1998. 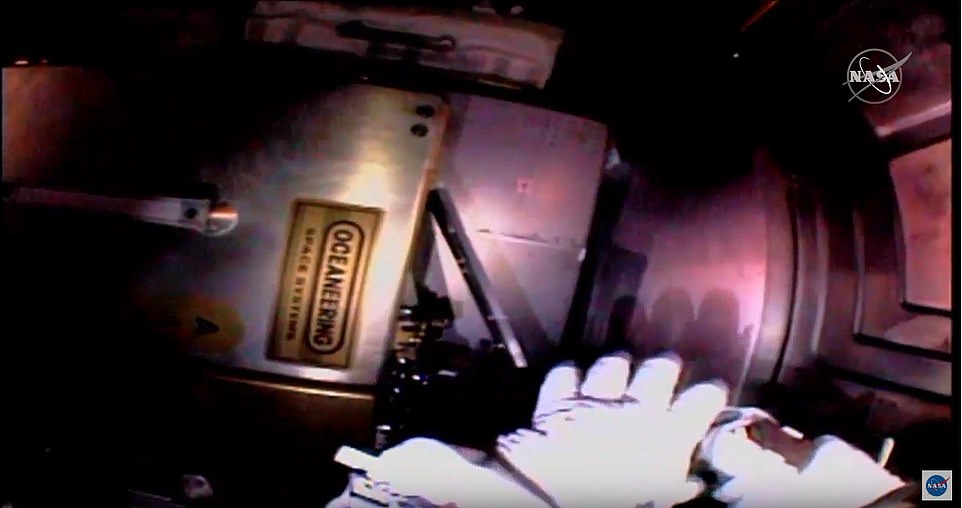 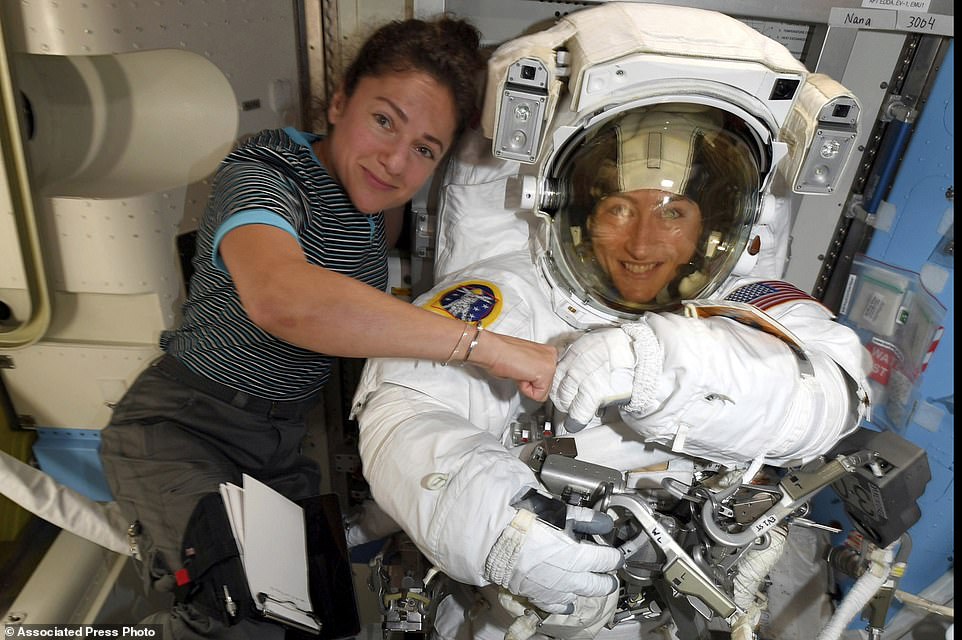 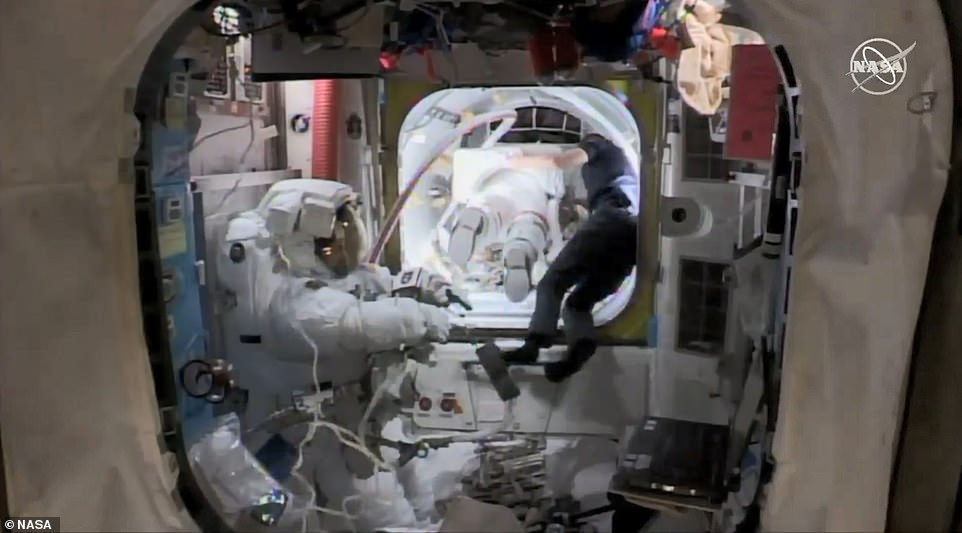 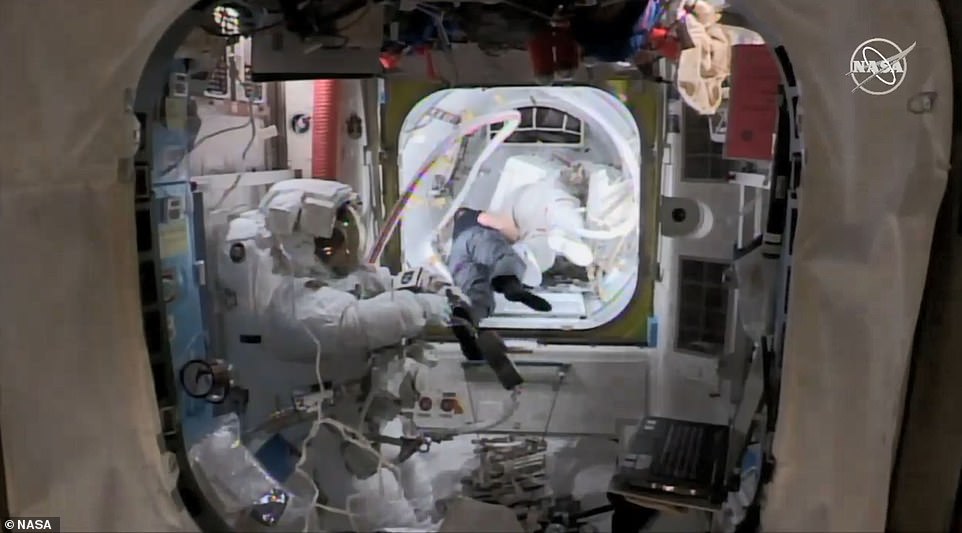 The planned all-woman spacewalk in March was called off because astronaut Ann McClain needed a medium spacesuit but only a large was available.

Due to safety issues with the fit she did not participate and man took her place, making today the revised date for the landmark mission.

‘We must never accept a risk that can instead be mitigated,’ she said on Twitter after the event. ‘Safety of the crew and execution of the mission come first.’ 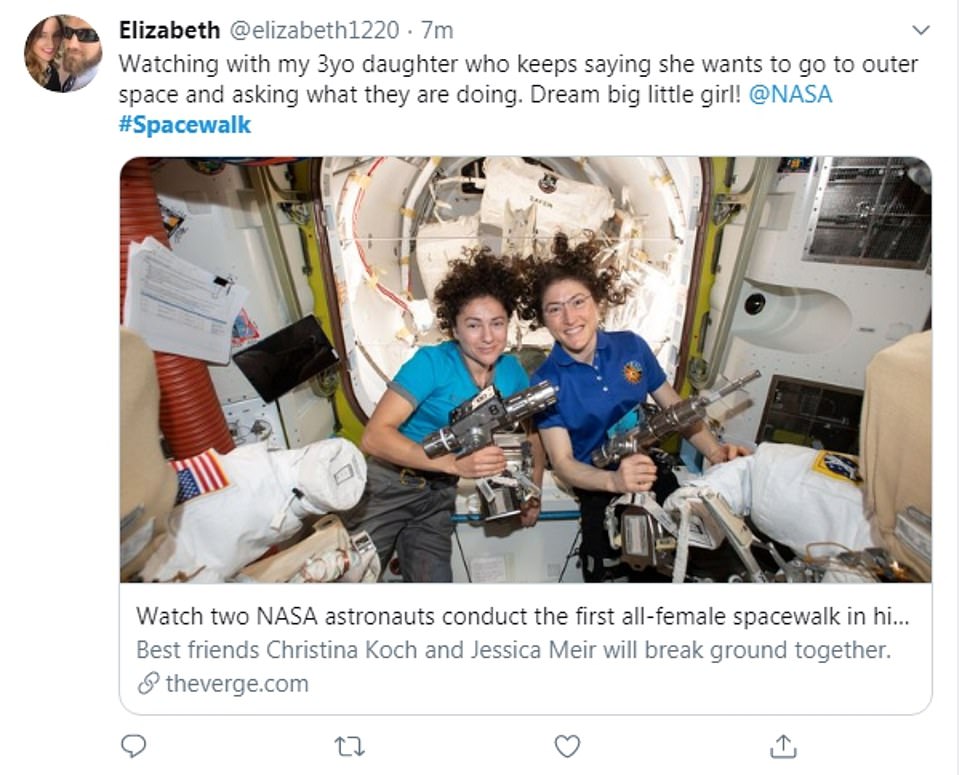 At the time the cancellation drew widespread criticism, including from former U.S. First Lady Hillary Clinton and global activism group March for Science.

Woman completing spacewalks date back to July, 1984 when Russian cosmonaut Svetlana Savitskaya became the first to do so.

Russian cosmonaut Alexei Leonov – who died just last week – conducted history’s first spacewalk in 1965, four years before the US put men on the moon for the first time. 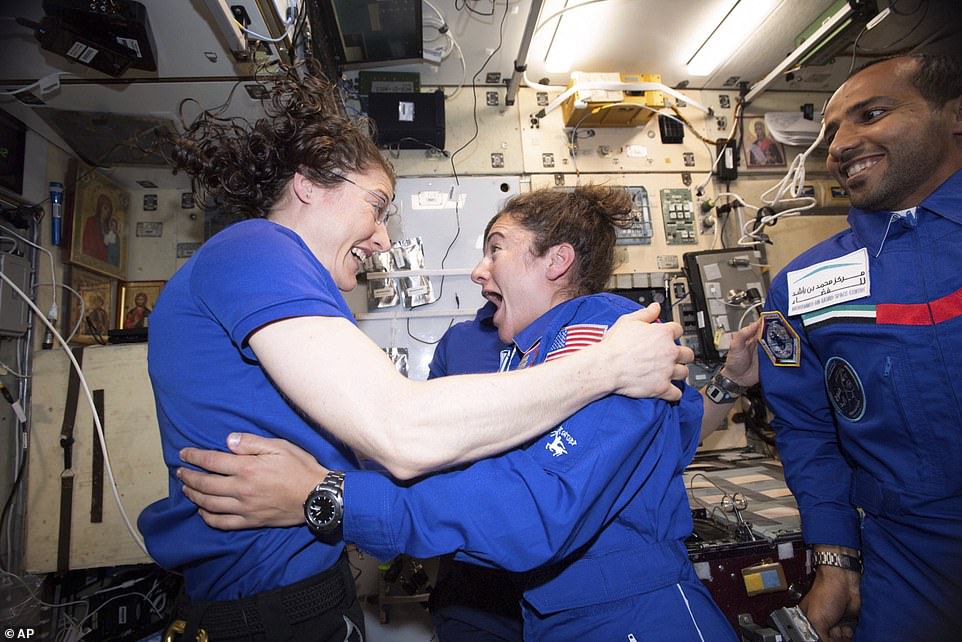 Christina H. Koch, left, and Meir greeted each other after Meir’s arrival on the International Space Station last month

While today’s event was a long time coming, NASA said it was not planned.

‘It is something that was bound to happen eventually, and the increase in female astronauts in space for the past year is providing another window of opportunity,’ a spokeswoman said. 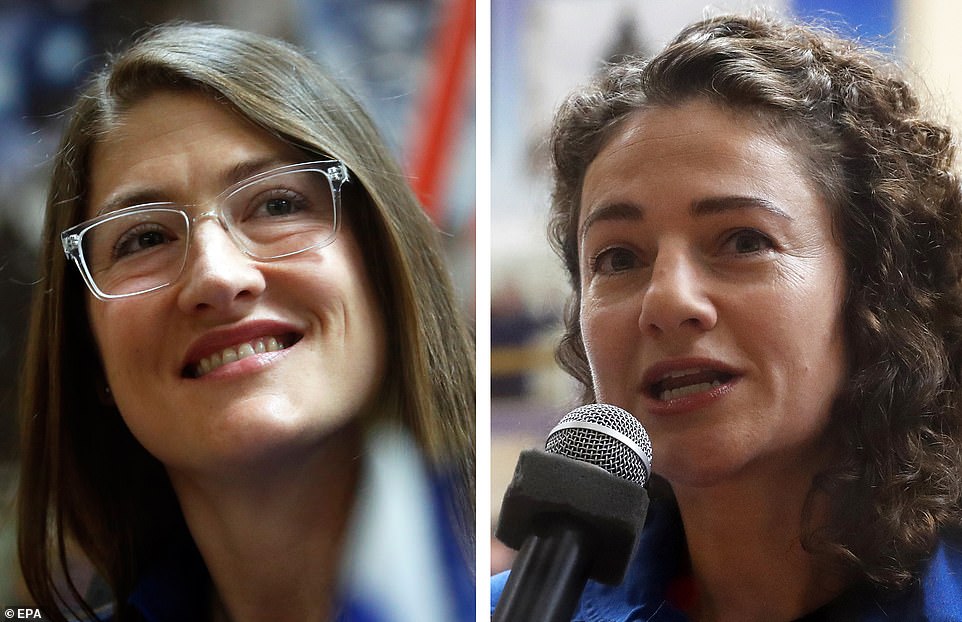 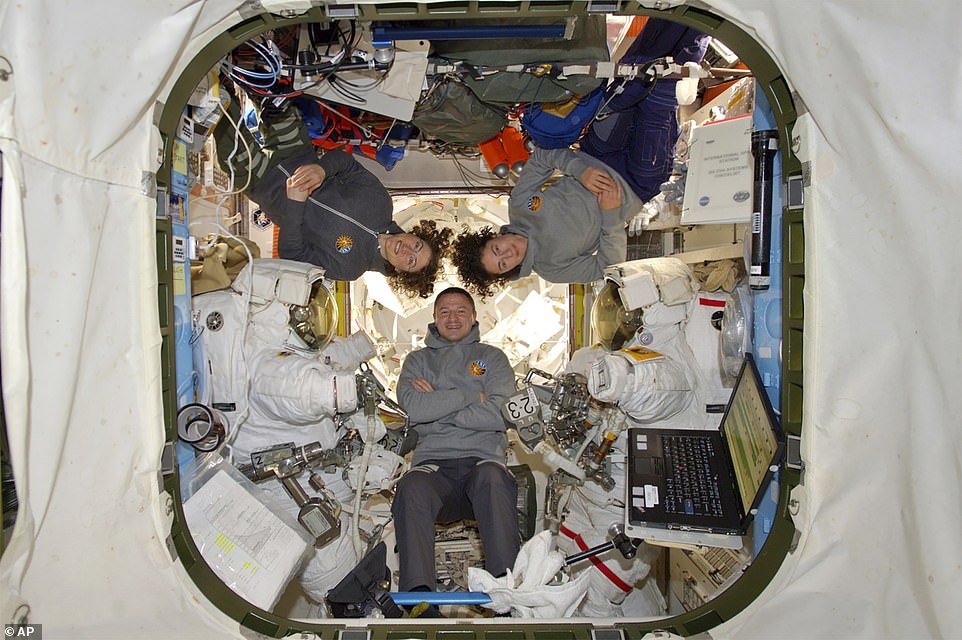 This photo provided by NASA shows astronauts Andrew Morgan with Christina Koch and Jessica Meir at the International Space Station on Friday, Oct. 18, 2019 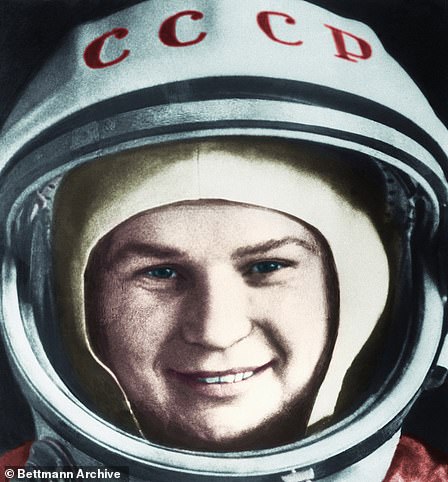 Valentina Tereshkova, 82, became a national heroine at the age of 26 when she made the first female solo space flight.

The former textile worker completed her groundbreaking space mission in 1963 in the spaceship Vostok VI.

Ms Tereshkova was an amateur parachutist when she was recruited into a cosmonaut programme in Moscow.

She was trained with three other women as part of Kruschev’s project for the first woman in space to be from the Soviet Union.

But she was the only woman to complete the mission. She was honored with the title Hero of the Soviet Union.

During her three-day mission, she circled the Earth 48 times and set a new record for time in space by completing the most orbits in the shortest recorded time.

Her flight was a major propaganda coup for the Soviet Union.

She was later given the United Nations Gold Medal of Peace in her role as a spokesperson for the Soviet Union.