Pollution DOES increase coronavirus risk: R rate for Covid-19 is higher in areas where the air quality is poorer, study finds’

Areas with higher levels of air pollution are more likely to more Covid-19 cases, according to a new study that found a clear link between pollution and the R rate.

Researchers from Washington University in St Louis compared the R rate in US towns and cities with population density and pollution estimates for each location.

They found there was a higher R rate in places with greater levels of PM2.5 – particles of pollution – in the atmosphere compared to areas with a cleaner sky.

The R rate is an indication of how fast Covid-19 is spreading, if it is above one then one person can spread the illness to more than one person.

The authors say someone’s health when they get Covid-19 impacts how ill they become and the same applies to how clean air is and fast the virus spreads. 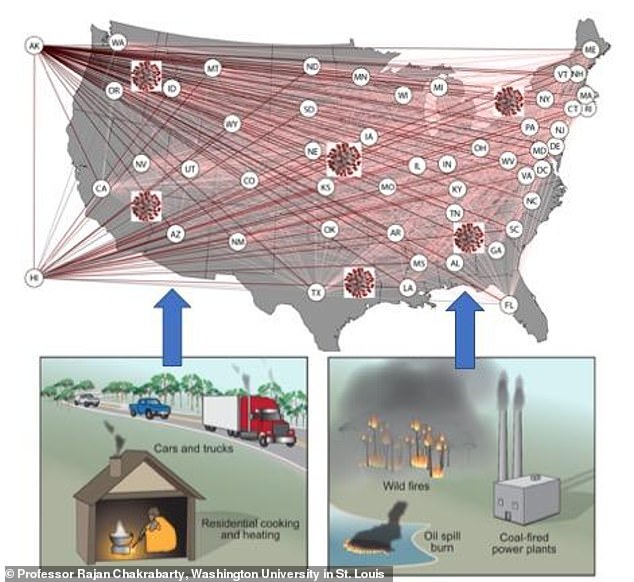 According to new research from the McKelvey School of Engineering at Washington University, pollution may bear part of the blame for the rapid proliferation of SARS-CoV-2, the virus responsible for the spread of COVID-19

Rajan Chakrabarty and colleagues examined 43 confounding factors including pollution levels, population density and any stay at home orders in April 2020 across US cities with the highest rate of R.

‘There was a strong, linear association between PM2.5 exposure and R,’ he said.

PM2.5 refers to ambient particles with a diameter of 2.5 micrometers or less; at that size, they can enter a person’s lungs and cause damage.

For this reason, PM2.5 can be detrimental to respiratory health. But how this relates to the spread of COVID-19 through a population had yet to be explored.

‘I was thinking, why, in the majority of the US states, have we had such a rapid spread of the virus?’ Chakrabarty said.

‘We wanted to confine our study to the point when the shutdown was in place. For the most part, people did remain confined from early March until the end of April.’

The team decided to look at places where R was greater than one and in each location examine 43 different factors – including population density, age distribution, even time delays in states’ stay-at-home orders.

Then, using pollution estimates across the US between 2012 and 2017 the team looked for any relationships between R and pollution. 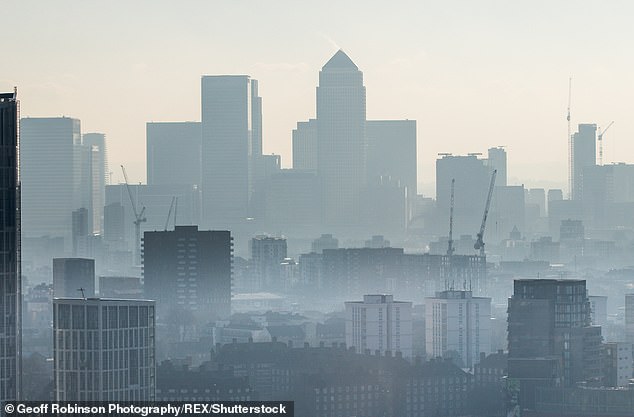 Using computer models they found that the R rate increased by 0.25 for every 10 per cent rise in sulfate, nitrogen dioxide or ammonium in PM2.5 particles.

‘Annual mean PM2.5 national standards are set at or below 12 micrograms per cubic meter, below that you are supposed to be safe,’ Chakrabarty said.

‘What we saw, the correlation we’re seeing is well below that standard.’, said Chakrabarty, suggesting the ‘safe exposure’ levels may be set too high.

They saw a rapid increase in R when PM2.5 exposure levels were below 6 micrograms per cubic meter.

WHAT IS PARTICULATE MATTER (PM)?

Chakrabarty hypothesizes this initial increase in R, which is followed by a plateau once levels hit 6 micrograms per cubic meter, is a result of initial changes in condition; when the air is free of PM2.5, an individual is unaffected.

The initial exposure is the catalyst for change in lung health, resulting in a change from non-susceptibility to susceptibility, which is reflected in the increasing R.

Basically as people are exposed to the particle matter, it impacts the lungs which in turn makes someone more susceptible to Covid-19 – and in turn increase the R rate.

‘Decades of strict air quality regulations in the US have resulted in significant reductions of nitrogen dioxide levels,’ the authors wrote in the paper’s conclusion.

‘Instead of working to resolve this issue, these reversals may be setting us up for another pandemic,’ Chakrabarty said.

Previous studies published in July and August that also found a link between coronavirus and air pollution inspired the latest work by Chakrabarty.

First, a July paper in the journal Science found that levels of susceptibility to COVID-19 is a driving factor for the pandemic; it is more important than temperature, which researchers initially thought might play an outsized role.

Then in August, research published in the Journal of Infection found that the highest number of cases of COVID-19 with severe illness were in places with higher pollution levels.

Before that work, a Harvard study in April found a link between a severe spike in coronavirus deaths and air pollution from PM2.5 particles.

Researchers found that even a small increase in PM2.5 concentration is linked to a significantly higher chance of death after contracting the coronavirus.

The findings have been published in the journal Science of the Total Environment.