Researchers have got their best ever view of the massive rips in the Earth’s mantle under Tibet.

The find is shedding new light on the deep geologic processes that occurred roughly 50 million years ago, when the Indian and Asian tectonics plates collided. 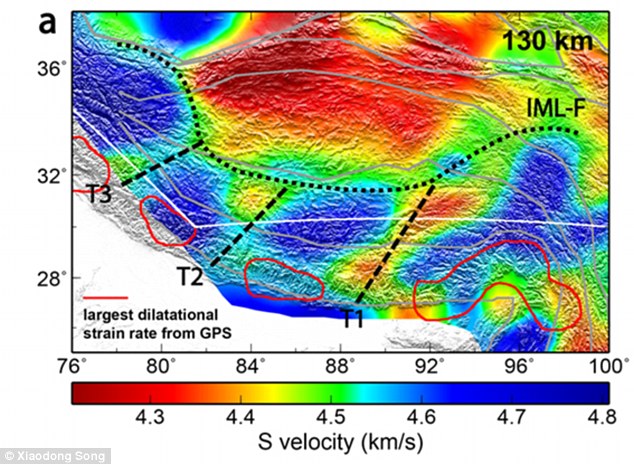 The find is shedding new light on the deep geologic processes that occurred roughly 50 million years ago, when the Indian and Asian tectonics plates collided. Pictured, a seismic wave velocity image of the Tibetan Plateau showing the tears in red

By collecting high-resolution earthquake data, geologists have generated a model that provides the clearest picture so far of the geology below the surface of the Tibetan Plateau.

‘The continental collision between the Indian and Asian tectonic plates shaped the landscape of East Asia, producing some of the deadliest earthquakes in the world,’ said Xiaodong Song, a geology professor at the University of Illinois and co-author of the new study.

However, researchers have struggled to understand the area as the vast high plateau is largely inaccessible to geological and geophysical studies. 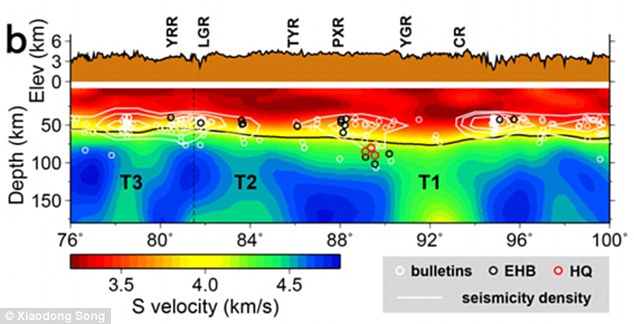 Song and his colleagues reveal that the upper mantle layer of the Indian tectonic plate appears to be torn into four pieces that dive under Asia – each at a different angle and distance from the origin of the tear.

They found that these newly modeled images match well with historic earthquake activity and with geological and geochemical observations.

‘The presence of these tears helps give a unified explanation as to why mantle-deep earthquakes occur in some parts of southern and central Tibet and not others,’ Song said.

The intact regions of crust between the tears are strong enough to accumulate strain to generate earthquakes.

The crustal areas above the torn regions are exposed to more of the heat from the mantle and are therefore more flexible, the researchers said. 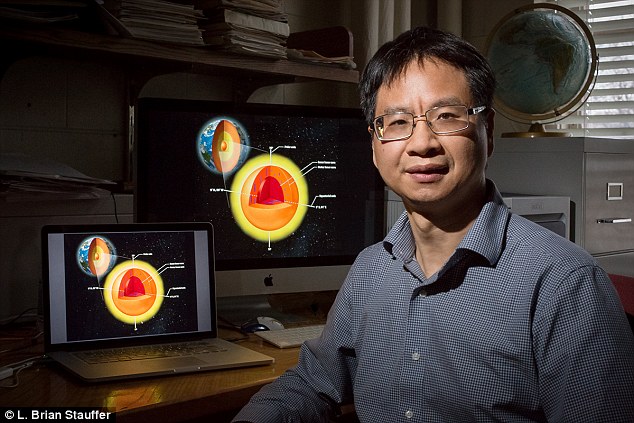 Illinois geology professor Xiaodong Song is a co-author of a new study that suggests rips in the upper mantle layer of the Indian tectonic plate are responsible for the locations of earthquakes and the surface deformation seen in southern Tibet.

‘What were previously thought of as unusual locations for some of the intercontinental earthquakes in the southern Tibetan Plateau seem to make more sense now after looking at this model,’ said graduate student and co-author Jiangtao Li.

‘There is a striking correlation with the location of the earthquakes and the orientation of the fragmented Indian upper mantle.’

The model also explains some of the deformation patterns seen at the surface, including a series of unusual north-south rifts.

Together, the earthquake locations and deformation patterns are evidence of a strongly coupled crust and upper mantle in southern Tibet, the researchers said.

Armed with this new information, geoscientists now have a clearer picture of what role the Indian upper mantle plays in shaping the Tibetan Plateau and why earthquakes happen where they do in this region.

This could help assess earthquake risk, the researchers said.

‘Overall, our new research suggests that we need to take a deeper view to understand the Himalayan-Tibetan continental deformation and evolution,’ Song said.