A rise in water temperatures could leave a ‘significant proportion’ of fish unable to mate and kill developing embryos, forcing them to abandon current spawning areas within a century.

As water warms it loses oxygen and raises metabolisms, increasing the bodies demand for oxygen.

This means that fish including salmon, tuna and cod could ‘drown’ in hotter oceans, lakes and streams during the vulnerable stages of their lives.

Adult fish preparing to mate become packed with either eggs or sperm, placing an additional strain on their hearts as they try to supply them with enough oxygen.

And fish embryos inside eggs could also die as they don’t have gills – meaning they will be unable to get enough oxygen to survive. 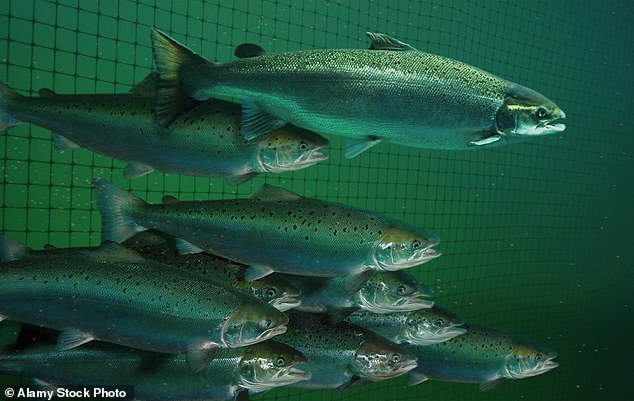 Fish species including salmon (pictured), tuna and cod could all be affected by warmer waters, as these hold less oxygen 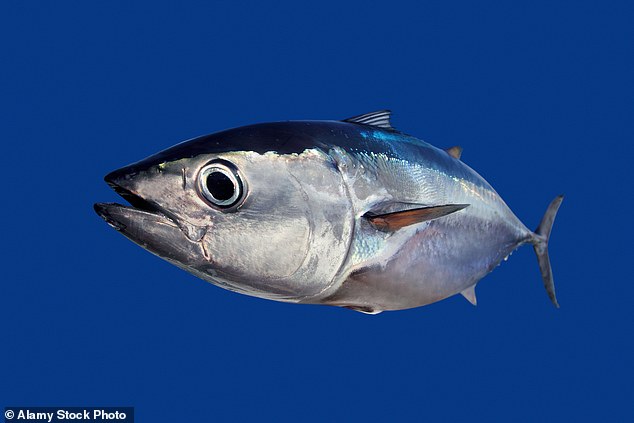 The scientists predicted that ten per cent would be affected if temperatures rose by 1.5C (1.8F). Pictured above is a bluefin tuna

Scientists studied the temperature tolerances of 694 species of marine and freshwater fish to establish the impact rising temperatures will have.

They analysed the temperature ranges in which fish can survive at every life stage: Embryo in an egg, larvae and adult, split by during and not during the mating season.

They also analysed predicted temperature changes in spawning areas, to predict what impact this may have.

‘Our findings show that fish are far more sensitive to heat than in their larval stage or sexually mature adults outside the mating season,’ said first author and biologist at the Helmholtz Centre for Polar and Marine Research, Dr Flemming Dahlke.

If global warming can be limited to 1.5C (2.7F) by the end of the century, the scientists said only ten per cent of fish species will be forced further north. 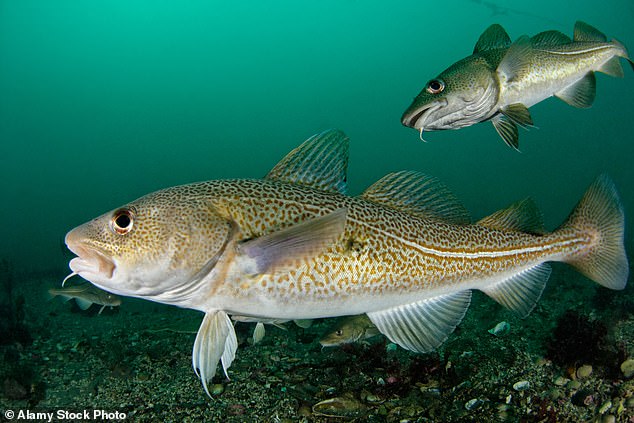 Adults will struggle to breed and eggs will ‘drown’ before hatching, scientists predicted. Pictured above are Atlantic cod

But current predictions on climate change suggest warming will rapidly exceed this limit.

A study published this week in Scientific Data warns that Earth has already warmed by 1C (1.8F) in the past 150 years, and temperatures are likely to keep rising.

In response to the change, fish will be forced to either adapt through biological evolution, which is likely to take too long, or move closer to the poles.

‘Some species might successfully manage this change,’ said Dr Dahlke.

‘But if you consider the fact that fish have adapted their mating patterns to specific habitats over extremely long time frames, and have tailored their mating cycles to specific ocean currents and available food sources, it has to be assumed that being forced to abandon their normal spawning areas will mean major problems for them.’

Species inhabiting rivers and lakes have the added problem that they are limited by size and geography, making migrating to deeper waters or areas nearer the poles ‘nearly impossible’. 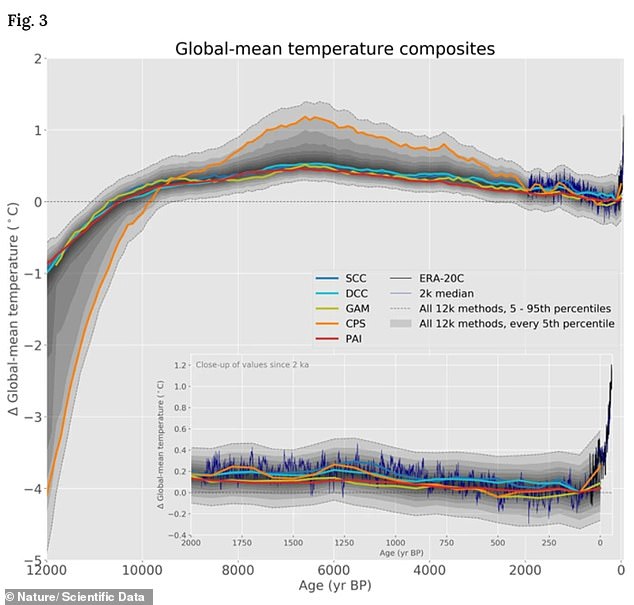 A graph published in a study in Scientific Data earlier this week said temperatures have already risen by 1C (1.8F) within the last 150 years

Any migration of fish species is also expected to cause a drop in productivity, as they adjust to their new habitats.

The study was published in the journal Science. The Alfred Wegener Institute and Helmholtz Centre for Polar and Marine Research (AWI) were involved in the study.