A robotic exoskeleton developed by Korean car manufacturer Hyundai has helped a paraplegic sportsman walk over and hug his mother for the first time in 10 years.

Korean para-athlete and pro-archer Jun-beom Park was confined to a wheelchair in 2008 after being involved in an accident as a school boy.

He damaged his thoracic vertebrae – the small bones that form the spine – in an incident that left him unable to walk.

Now, 11 years on, the archery star has taken his ‘second first steps’ thanks to an ‘exoskeleton suit’ developed by Hyundai Motors Robotics Lab in Seoul, South Korea.

In a heartwarming video produced by Hyundai, Jun-beom, 28, is seen putting his weight on his legs to stand up from his wheelchair, aided by the Hyundai Medical Exoskeleton (H-MEX).

The H-MEX is designed to help paraplegics and elderly people walk, as well as helping to reduce back injuries for manual labourers. 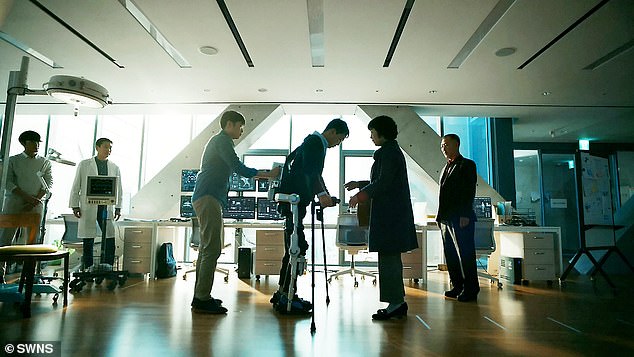 The company also has a ‘HUMA’  exoskeleton that operates on a different control principle, but it provides assisted mobility support for people with limited muscular power.

The para-archer, ranked seventh in the world, had suffered from depression as a result of the incident that left him paralysed, isolating himself from his friends, girlfriend or family for a year.

The sportsman had written a four-page letter to Hyundai last year asking the company to help him walk again.

Hyundai has carried out R&D work and trials of the new suit, which was first unveiled back in 2017.

But the demonstration in the video was not without its dangers as any mistake or miscalculation could have been dangerous for the young athlete.

After taking a deep breath, Park walks towards his mother in an emotional scene spliced with a footage of a baby’s first steps. 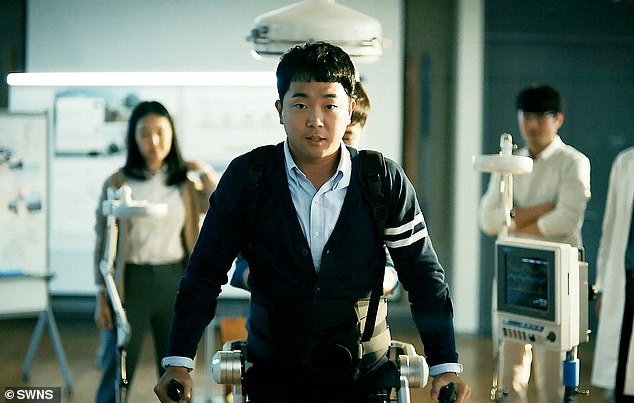 Slowly and steadily, Park goes on to embrace his mother courtesy of the wearable robotics.

Hyundai says it has a vision to develop technology where robots and humans can work together to re-define mobility.

‘Our lab is eager to develop a medical exoskeleton, H-MEX, as one of the mobility solutions for paraplegics to improve their daily life,’ said Dong Jin Hyn, head of the Robotics Lab. 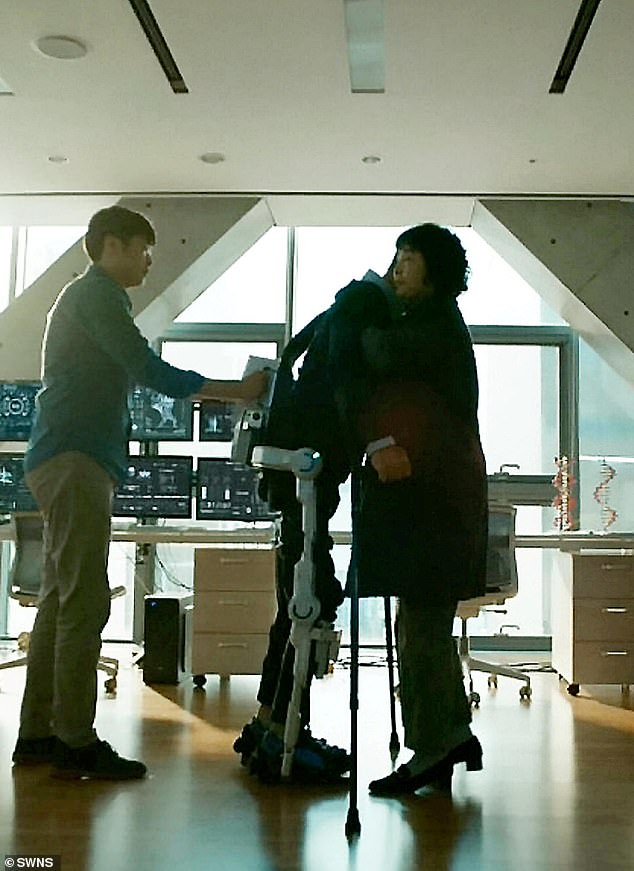 In the heartwarming video, Jun-beom, 28, is seen putting his weight on his legs to stand up from his wheelchair, aided by his Hyundai Medical Exoskeleton (H-MEX)

WHAT IS AN EXOSKELETON?

Exoskeletons are wearable devices that work in tandem with the user.

Exoskeletons are placed on the user’s body and act as amplifiers that augment, reinforce or restore human performance.

The opposite would be a mechanical prosthetic, such as a robotic arm or leg that replaces the original body part.

Exoskeletons can be made out of rigid materials such as metal or carbon fibre, or they can be made entirely out of soft and elastic parts.

Exoskeletons can be powered and equipped with sensors and actuators, or they can be entirely passive.

Exoskeletons can be mobile or fixed/suspended and can cover the entire body, just the upper or lower extremities, or even a specific body segment such as the ankle or the hip.

‘Hyundai Motor plans to fulfil its brand vision through robotics for future mobility.

‘With our effort on robotics, we want to contribute to progress for humanity.’

H-MEX is currently in the process of being approved by the Ministry of Food and Drug Safety in Korea and the US Food and Drug Administration for commercialisation as a medical device, Hyundai told MailOnline.

The company first demonstrated its H-MEX at the Geneva Motor Show back in 2017.

It has been designed to help patients with lower spinal cord injuries regain the ability to walk.

It is also designed for industrial workers who spend much of the working day reaching up in overhead environments.

As with the other exoskeletons, the frame of the device supports and protects the user’s lower back and upper legs.

H-MEX is powered by removable and rechargeable battery packs and its light-weight frames are adjustable in length to fit different sizes of user.

The user can adjust walking pace, length of stride and torso tilting angle via a smartphone app. 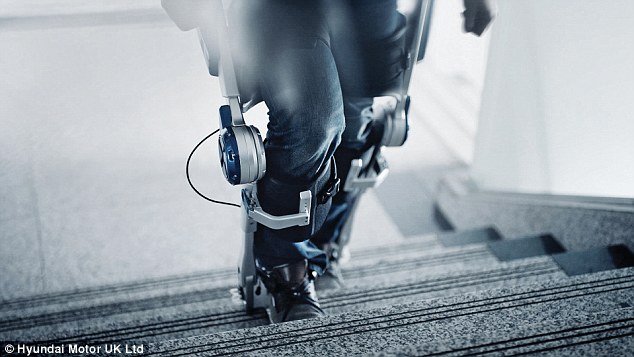 The suit can support 90 pounds of a wearer’s weight and can run at 7 miles an hour on level surfaces or even up and down stairs.

Hyundai, which is known primarily as a car manufacturer, has a subsidiary called Hyundai Robotics, dedicated solely to the robot automation industry.

Hyundai Robotics said it produced more than 50,000 industrial robots in 2018 for the first time in Korea.