How Romans made their BISCUITS: Incredible drawings reveal the complex cascading factory design powered by 16 water wheels used to make food for sailors

The world’s oldest biscuit factory may have been discovered in southern France.

As water cascaded down the wheels, it turned a gear system that crushed grains into flour, which was then shipped to nearby Roman ports.

Previously, researchers thought large-scale watermills – like Barbegal – were only used on an industrial scale several centuries later during medieval times. 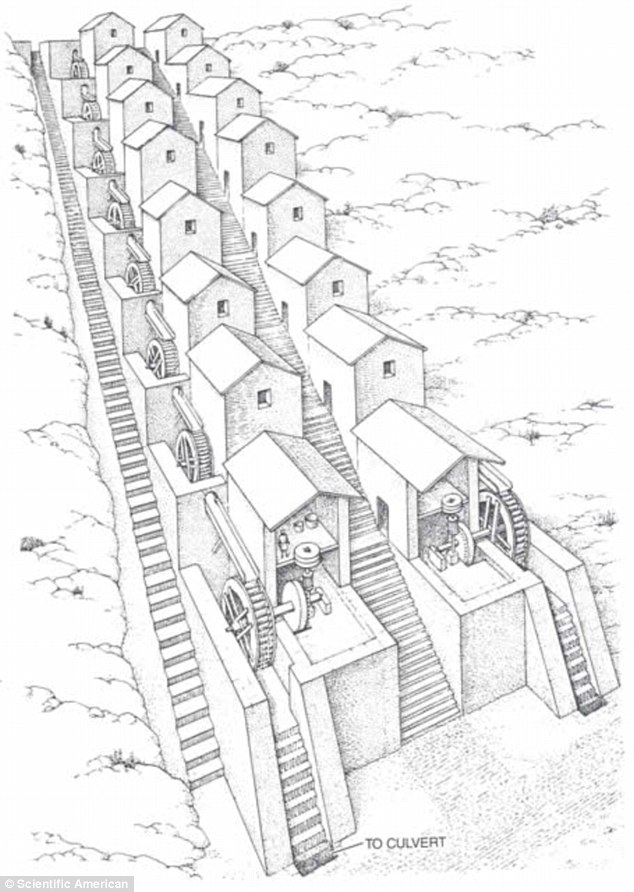 The Barbegal factory was a large complex of 16 water wheels stacked almost vertically in southern France. Water fed into it from an aqueduct at the top of the site, flowing through each wheel, which was attached to a gear system that ground grain into flour (artist’s impression)

WHAT ARE SHIP BISCUITS?

Ship biscuits were once a staple part of a sailor’s diet on long voyages.

It is simple biscuit or cracker, made from flour, water and sometimes salt.

Before the invention of canned goods, few food items lasted longer than a week before rotting or going stale.

Ship biscuits could last months, and packed a lot of calories for their size, making them ideal for long trips.

Also known as hardtacks, they were eaten by European sailors from the 12th Century up to the early 1900s.

The Roman mill, first discovered in 1937, is believed to be one of the world’s oldest industrial complexes, producing enough flour to feed 12,500 individuals each year.

Until now, researchers had assumed the site was only used to supply flour to the nearby Roman city of Arelate.

However, new analysis of ancient limestone deposits found at the complex revealed its wooden wheels stopped turning in late summer and autumn.

This suggests the factory did not supply Arelate – as the city would have needed flour throughout the year, and instead was likely used to supply shipping crews.

Scientists at Johannes Gutenberg University in Mainz, Germany, analysed limestone found at the site shortly after its discovery.

The deposits had built up on the wheels as they churned through the water, and are all that is left of the ancient wooden mechanism, which rotted away centuries ago.

Chemical analyses of the limescale shows it was not deposited throughout the year, and suggests the mill ceased production in late summer and autumn.

Flour does not store as well as grain.

As a result, if the factory was used only to supply four to nearby Arelate — as had previously been suspected — it would need to be running continuously all-year. 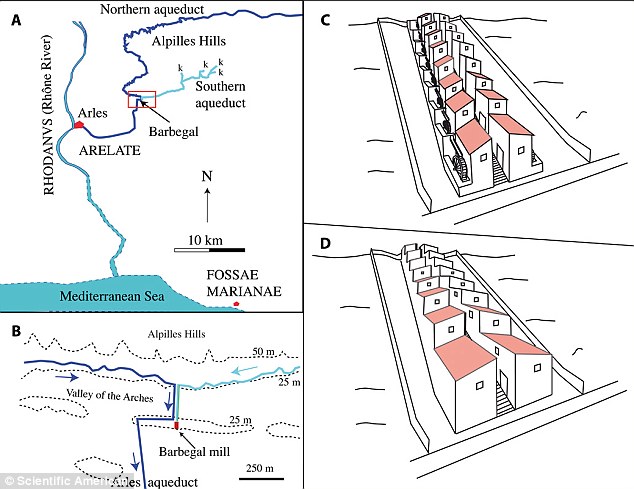 It was thought the Barbegal mill, which was fed by a vast aqueduct system (bottom left image), produced flour for the nearby Roman city of Arelate (top left). New research suggests the flour went to nearby ports, and that the site’s water wheels were actually positioned within buildings (bottom right), rather than outside (top right) as previously thought 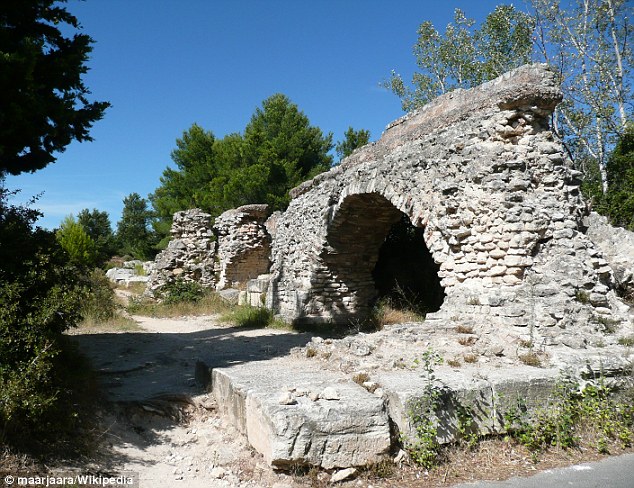 Pictured is part of the aqueduct system used to feed water into the enormous Roman Barbegal flour mill. The factory produced flour that was later used to make biscuits for sailors

‘For a major city you need a supply all year round,’ study lead author Professor Cees Passchier told New Scientist.

Instead, the mill may have made flour for shipping voyages, which were seasonal – Roman ships avoided the Mediterranean during winter due to stormy weather.

The researchers suggest this flour was transported to the nearby ports of Arles and Fossae Marianae, where it was used to make ‘shipping biscuits’.

Also known as hardtacks, these simple crackers were made from flour, water and sometimes salt. 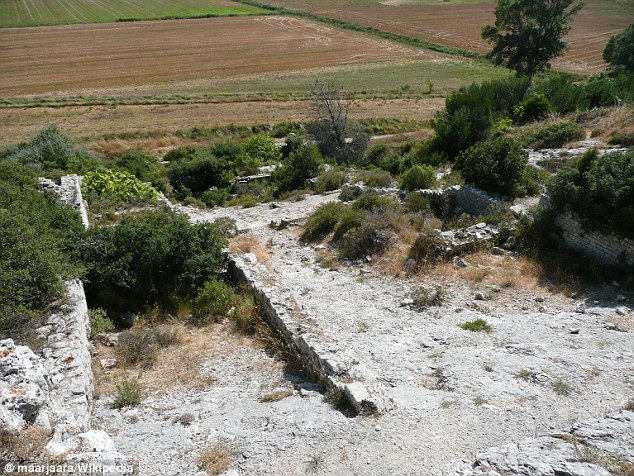 This image shows part of the staircases that flanked the mill’s wheels. The watermill featured a large complex of 16 wooden wheels fed by 38 miles (60km) of winding aqueducts 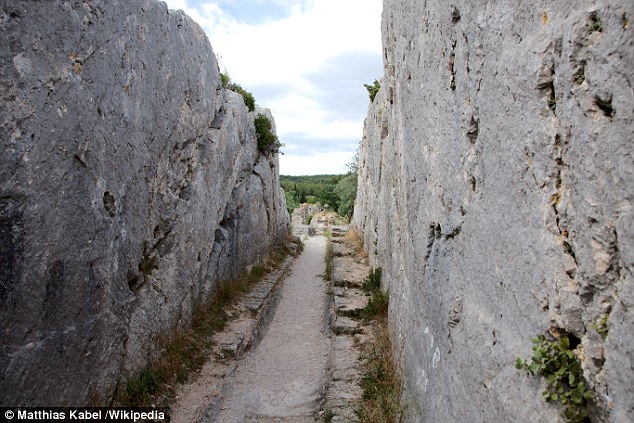 A long series of aqueducts (pictured) provided the mill with water. As this water cascaded down the wheels, it turned a gear system that crushed grains into flour, which was later shipped to nearby Roman ports

WHAT IS THE BARBEGAL FACTORY?

The Barbegal factory is the largest ancient water-powered factory found anywhere in the world.

The Roman complex in southern France features 16 vertically-stacked water wheels and was built around the 4th century AD.

Scientists have previously suggested the site, discovered in 1937, was used to supply the nearby Roman city of Arelate with flour. 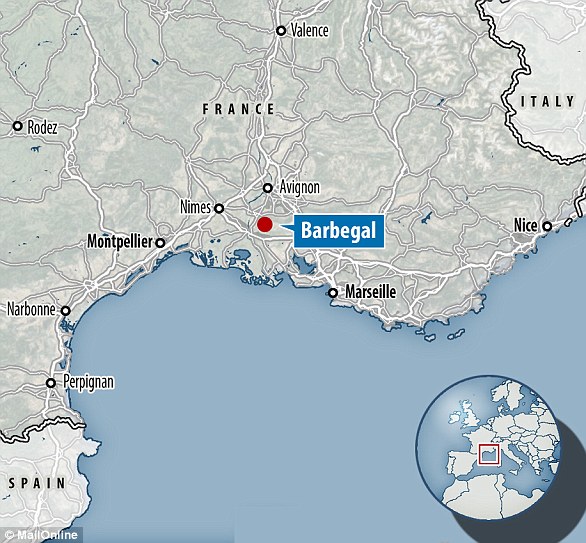 An aqueduct system around 38 miles (62km) long fed the city, stopping at the factory along the way.

It is thought about half the water provided by the aqueducts was used to power the facility.

New research suggests the complex, located around 12 miles (19km) from the French town of Barbegal, was used to produce biscuits for Roman soldiers.

These simple snacks were incredibly popular among sailors before the invention of canned goods as the biscuits lasted weeks without rotting or going stale.

Researchers said the crystalline structure of the limestone deposits reveals they were formed in the dark by fast-flowing water.

This suggests the waterwheels were actually kept inside the small huts that lined the hill, rather than outside, as previous research has suggested.

Watermills were used by ancient civilisations from Egypt to China to power machinery like mills and for lifting water. 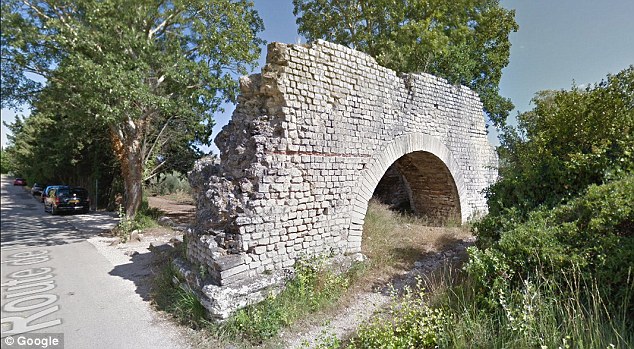 This image shows part of the Barbegal aqueduct. Chemical analyses of limescale found at the mill shows it was not deposited throughout the year, and suggests the mill ceased production in late summer and autumn

Barbegal is unique as the site features 16 water wheels arranged in a pair of adjacent rows down a steep hillside.

A 38-mile-long aqueduct system fed both nearby Arelate and the mill, which guzzled half of the 45 million litres of water that passed through the waterway per day.

It is believed more of these vertical Roman watermills were built around Europe, but few have been found, as they were largely made using wood, which quickly rots. 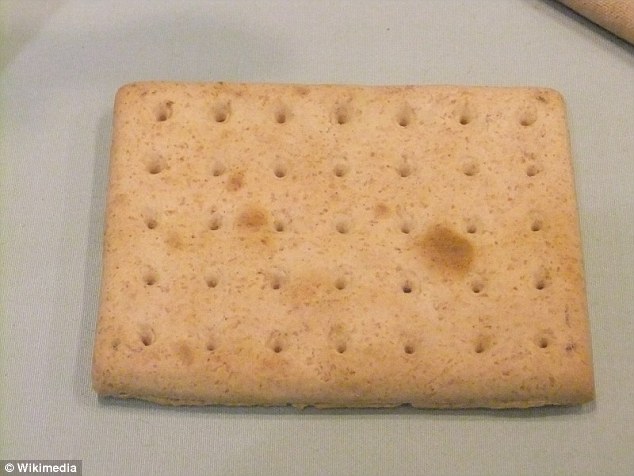 Pictured is a shipping biscuit made by the British Navy during the early 20th century. It is on display at the Merseyside Maritime Museum. The biscuits were popular among sailors before the invention of canned goods as they lasted weeks without rotting or going stale