Supermarket giant Sainsbury’s has vowed to pump £1billion into environmental policies in order to reach ‘net zero’ by 2040.

The ambitious target is some ten years ahead of the UK government and would see the company halve its plastic packaging and food waste.

The retailer said it will also take action to cut carbon emissions, food waste, plastic packaging, and water use, and increase recycling and healthy eating.

Another scheme outlined by the UK’s second-largest supermarket chain is a deposit and refund scheme for plastic bottles to boost recycling. 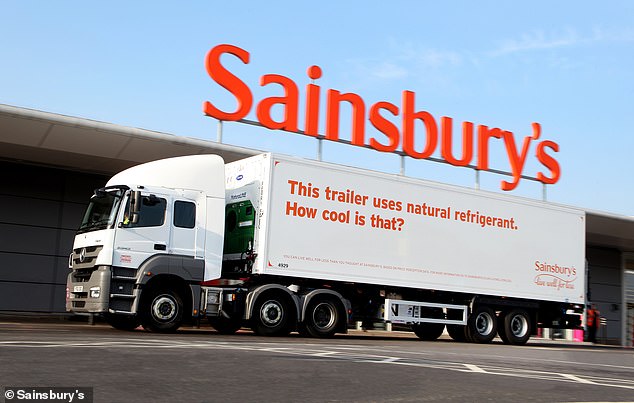 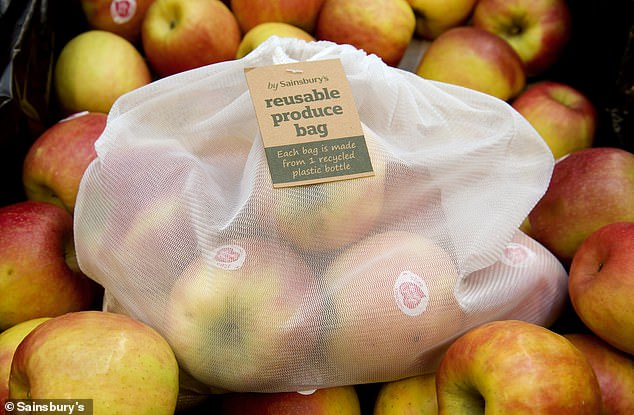 Sainsbury’s today revealed its plans will aid in limiting global warming to 1.5°C — the most ambitious target of the Paris Agreement.

It intends to recycle more of its own waste, use more renewable energy and expand facilities to help customers recycle unwanted items.

Sainsbury’s will endeavour to halve plastic packaging by 2025 and slash food waste by 50 per cent by 2030.

Other measures include making fridges as efficient as possible, running 20 per cent  of its fleet on alternative fuels by 2025 and switching all lighting in stores to LEDs by 2022.

Sainsbury’s also announced plans to minimise water use, fitting stores with rainwater harvesting facilities, lowering the amount of water in bathrooms and looking to recycle water from ice on fish counters and car washes.

It claims to be the first UK supermarket to make a commitment of this scale.

The announcement builds on previous announcements from Sainsbury’s relating to environmental initiatives.

Where possible plastic film on fruit and vegetables will be replaced or removed.

Sainsbury’s is committed to reduce food waste by 50 per cent by 2030. This involves developing new packaging and labels to increase shelf life.

The company supports 2,093 food donation programmes in place and plans to increase the amount it redistributes.

Many supermarkets and retailers have announced several plans to cut down on plastic waste but this announcement is by far the biggest scale of any major British retailer.

For example, by the end of this year, dark coloured, hard to recycle plastic and polystyrene packaging from Sainsbury’s own brand ranges will be replaced with recyclable alternatives.

Morrison’s made an identical pledge back in November, claiming to be the first to do so at the time.

Morrisons claimed at the time its switch away from black plastic means some 4,000 tonnes of plastic used in packaging will now be easier to identify and recycle.

The mesh totes — which can be picked up from the greengrocer section — are made from 100 per cent unbleached, untreated and recycled cotton which is machine washable.

Tesco announced last week it plans to ditch 67 million pieces of plastic per year by removing the wrapping from all multipacks of tinned food.

Tesco will be the first UK supermarket to remove the plastic from multipack food tins from all of its stores. Waitrose has conducted a trial in 17 shops. 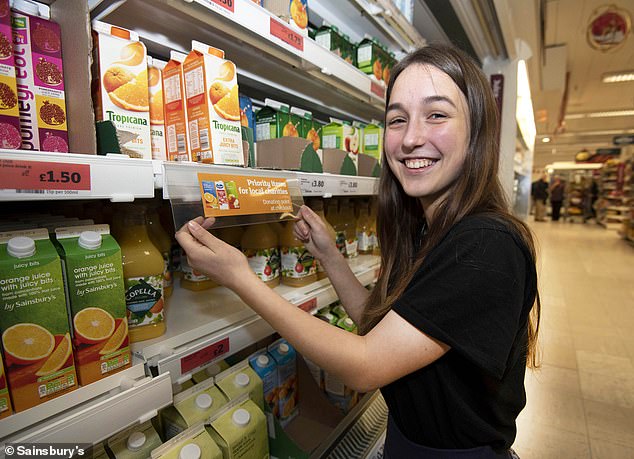 Zero food waste has been sent to landfill by Sainsbury’s since 2013, it claims. A total of 87 per cent of its stores have a food donation partner system

WHAT HAS SAINSBURY’S PLEDGED TO DO TO REACH NET ZERO BY 2040?

Sainsbury’s today revealed its plans will aid in limiting global warming to 1.5°C — the most ambitious target of the Paris Agreement.

To do this it has outlined a range of policies including recycling, biodiversity and waste.

Sainsbury’s claims to 3.8million trees with the Woodland Trust since 2005.  have planted

Ninety-eight per cent of palm oil sold at Sainsbury’s, which is notoriously bad for the environment and biodiversity, is a sustainably sourced.

It also claims 100 per cent of its seafood is from sustainable sources.

Sainsbury’s has vowed to halve plastic packaging in its stores by 2025.

Plans to replace 4,500 tonnes of own brand dark coloured packaging with recyclable alternatives by March 2020.

Sainsbury’s has plans to improve the health of its customers as well as its planet.

Its ‘Little Ones’ initiative contains one of the five-a-day in each savoury pouch and more than 4.6million items have been sold since its launch.

Sainsbury’s also claims to be the first to sell biofortified mushrooms enforced with additional vitamin D and B12.

Sainsbury’s intends to have 100 per cent of its stores lit using low-energy LED lights by 2022.

The company has also vowed to switch to alternative fuels for 20 per cent of its fleet of delivery vehicles by 2025.

Sainsbury’s intends to be water neutral by 2040.

A total of 170 stores have rainwater harvesting facilities and it says it uses one billion less litres of water a year than it did in 2005.

Zero food waste has been sent to landfill by Sainsbury’s since 2013, it claims.

A total of 87 per cent of its stores have a food donation partner system.

Sainsbury’s says it donates around 5,000 tonnes of clothing to charity every year.

It also makes every clothes hanger from recycled material.

President-delegate of the COP26 climate change conference to be held in Glasgow later this year, Claire O’Neill said of the Sainsbury’s announcement: ‘It’s fantastic to see Sainsbury’s committing to hitting net zero by 2040.

‘It’s vital that big organisations recognise the responsibility they have in curbing emissions.

‘Today’s announcement is an outstanding example that being green shouldn’t be a barrier to success. I hope to see other major supermarkets following their lead.’

Chief executive, Mike Coupe, said: ‘Our commitment has always been to help customers live well for less, but we must recognise that living well now also means living sustainably.

‘We have a duty to the communities we serve to continue to reduce the impact our business has on the environment and we are committing to reduce our own carbon emissions and become Net Zero by 2040, ten years ahead of the government’s own targets, because 2050 isn’t soon enough.

‘We have a strong heritage of reducing our carbon emissions – we have reduced them by 35per cent over the past 15 years despite the footprint of our business increasing by over 40 per cent.

‘We invested £260 million in over 3,000 initiatives over the last decade, including the start of our LED lighting programme and refrigeration.

Over the next 20 years we will invest a further £1 billion in programmes that will transform the way we do business and put environmental impact at the forefront of every decision we make.

‘We recognise that we have a once in a lifetime opportunity to make the changes needed to help the planet exist sustainably.

‘We have over 27 million customers each week and almost 180,000 colleagues and we hope that we can collaborate across industries and sectors to help create momentum and drive meaningful change.

‘Only when the trajectory for global warming slows to a maximum of 1.5 degrees will we all know that we can truly live well for less now and in the future.’