Sand dunes ‘communicate’ with each other by creating turbulence in their wake — similar to that behind moving boats — that repels their downstream neighbours.

Experts from the University of Cambridge built a circular tank that works like a race track — letting them watch dunes migrate in flowing water over long periods of time.

When two dunes were put close together in the race track, the researchers found that they got further and further apart with time.

This separation increased until the dunes were at the opposite sides of the track.

Moreover — using high speed cameras to monitor the individual particles moving across the dunes — the researchers found the flow over each dune was different.

The finding is key to understand the dune migration which can threaten shipping channels, increases desertification and even bury infrastructure such as highways. 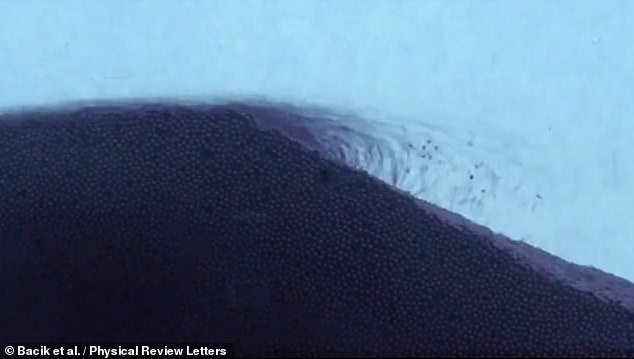 ‘This interaction is controlled by turbulent swirls from the upstream dune, which push the downstream dune away’ said lead paper author and applied mathematician Karol Bacik of the University of Cambridge.

Dunes form — and start moving downstream — when piles of sand are exposed to either wind or a flow of water.

Whether in deserts, on river beds or at the bottom of the sea, sand dunes rarely occur in isolation — instead typically appearing in large groups to form patterns that are known as dune fields or corridors.

Despite knowing that dunes can move at different speeds, it had not been clear how dunes might interact with each other — for example, what would happen if one dune caught up with another and they collided.

‘There are different theories on dune interaction. One is that dunes of different sizes will collide, and keep colliding, until they form one giant dune, although this phenomenon has not yet been observed in nature,’ Mr Bacik said.

‘Another theory is that dunes might collide and exchange mass, sort of like billiard balls bouncing off one another, until they are the same size and move at the same speed,’ he added.

When they tried to put these competing hypothesis to the test, however, the researchers found that something entirely different occurs between the dunes.

‘We’ve discovered physics that hasn’t been part of the model before,’ said lead researcher and mechanical engineer Nathalie Vriend.

Typically, research into the behaviour of sand dunes has been done numerically.

For their study, however, the researchers built a unique experimental facility that allowed them to study the dunes’ behaviour over the long-term.

Water-filled tanks in which waves are generated are common tools for studying the shape-shifting sand dunes in the laboratory — but normally the dunes can only be monitored until they reach the end of the flume.

To get around this limitation, Mr Bacik and colleagues built a circular tank that acts like a race track, allowing the dunes to keep moving for hours as the flume rotates.

The researchers used high-speed cameras to track the flow of individual particles within the dunes.

‘Originally, I put multiple dunes in the tank just to speed up data collection, but we didn’t expect to see how they started to interact with each other,’ Mr Bacik said.

When he started the experiment, the two dunes had with the same volume and the same shape — and began to move when the water started flowing.

‘Since we know that the speed of a dune is related to its height, we expected that the two dunes would move at the same speed,’ explained Dr Vriend.

‘However, this is not what we observed,’ she added. 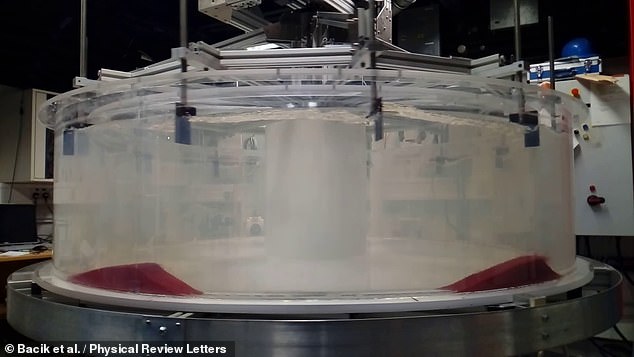 Mr Bacik and colleagues built a circular tank that acts like a race track, pictured, allowing the dunes to keep moving for hours as the flume rotates

At first, the front dune moved faster than the back dune, but as the experiment continued, the researchers observed the front dune slowing down, until the two dunes were moving at almost the same speed — at opposite sides of the racetrack.

The researchers found that the pattern of flow across the two dunes was different — with the water’s passage disturbed by passing over the front dune, generating ‘swirls’ on the back dune and pushing it away.

‘The front dune generates the turbulence pattern which we see on the back dune,’ Dr Vriend explained.

‘The flow structure behind the front dune is like a wake behind a boat and affects the properties of the next dune.’ 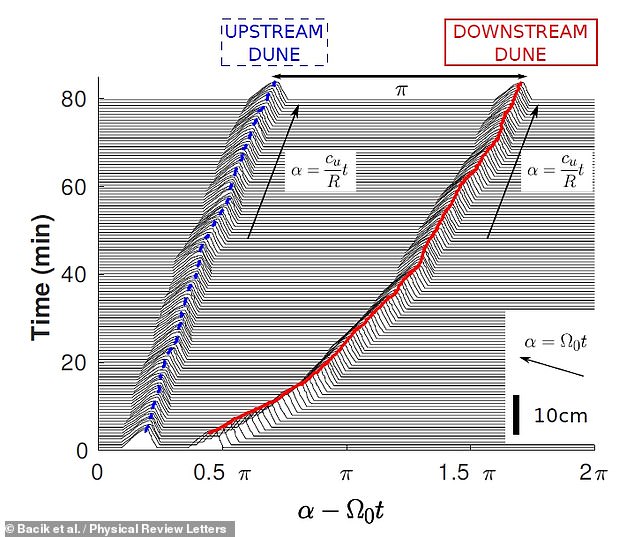 At first, the front dune moved faster than the back dune, but as the experiment continued, the researchers observed the front dune slowing down, until the two dunes were moving at almost the same speed — at opposite sides of the racetrack

With their initial study complete, the team are now hoping to find evidence of similar large-scale and complex dune migrations in deserts, using field observations and satellite images.

This, they explained, will allow them to assess whether measures intended to divert the migration of dunes are effective.

The full findings of the study were published in the journal Physical Review Letters.