Home » Science » Scared of spiders? Whatever you do, don’t wear GREEN

Scared of spiders? Don’t wear GREEN! Study of 1,200 arachnids reveals some species are colourblind and can only see this colour

A study of 1,200 wolf spiders has revealed that these creepy crawlies, known for their excellent eyesight and sharp hunting skills, are drawn to this particular colour.

The arachnids are essentially colourblind – and are only sensitive to light at the green wavelength, scientists found.

The spiders are attracted to the colour green as their vision is best attuned to this shade, making it far easier for the arachnids to spot prey or a mate.

Until now, it was thought the species did not place much importance on colour. 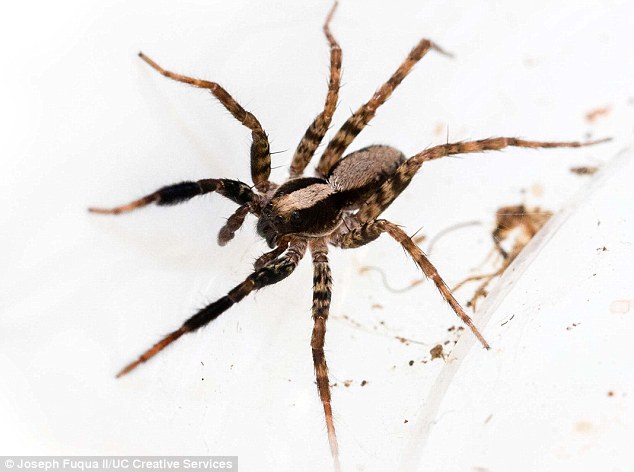 A study of 1,200 wolf spiders (pictured) has revealed that the creepy crawlies known for their excellent eyesight and sharp hunting skills are drawn to this colour

Wolf spiders, which are found in countries across the world, have four sets of eyes which they use to track prey – quickly pouncing on anything that gets too close.

In a new study into the species’ eyesight, researchers looked at how the creepy crawlies reacted to a video of courting spiders.

In the footage, scientists manipulated the background colour, contrast and intensity.

They found that female spiders were more likely to respond to videos of males that contrasted sharply from their background.

They responded even more strongly to the coloured versions of the footage – proving that colour influences the movements of the spider.

Humans have trichromatic vision, which means they have retinal cells that are capable of differentiating between red, green and blue. 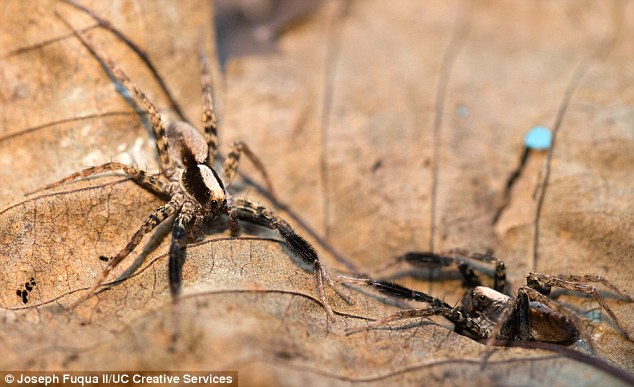 Like most spiders, wolf spiders (pictured) have four pairs of eyes, some of which have a reflective lens called a tapetum that sparkles in bright light

Wolf spiders have dichromatic vision and are only able to see ultraviolet and green light – and it appears the latter is their favourite.

The spiders’ vision makes them ‘basically colourblind’, said lead researcher Professor George Uetz, a biologist from the University of Cincinnati.

But while they don’t read colour, they do read the intensity of light, scientists found – and because they can only detect green, they will always head to this colour first.

This is because prey and mates stand out best against this colour.

Professor Uetz said: ‘The assumption was wolf spiders don’t pay attention to colour. But we found that isn’t really true.’

One surprising finding was that spider eyesight seems to adapt to the changing seasons.

‘What we found is that for female spiders, intensity matters more than colour. But for male eavesdroppers, colour matters, too. That is the odd finding. We didn’t expect that at all,’ Professor Uetz said.

IS A FEAR OF SPIDERS IN OUR DNA?

Recent research has claimed that a fear of spiders is a survival trait written into our DNA.

Dating back hundreds of thousands of years, the instinct to avoid arachnids developed as an evolutionary response to a dangerous threat, the academics suggest.

It could mean that arachnophobia, one of the most crippling of phobias, represents a finely tuned survival instinct.

And it could date back to early human evolution in Africa, where spiders with very strong venom have existed millions of years ago.

Study leader Joshua New, of Columbia University in New York, said: ‘A number of spider species with potent, vertebrate specific venoms populated Africa long before hominoids and have co-existed there for tens of millions of years.

‘Humans were at perennial, unpredictable and significant risk of encountering highly venomous spiders in their ancestral environments.’

‘That makes a lot of sense because when you go out in the early season when the spiders first come out, there are no leaves on the trees so there is broad spectrum light.

‘But as the seasons change, leaves come out and everything turns green.

‘Spiders have to be able to see the contrast against a lot of color backgrounds’, he said.

Wolf spiders are found all around the world, and about 2,300 species are known.

They are mainly sit-and-wait predators, pounding on unsuspecting prey that passes too close.

Earlier this year researchers revealed that wolf spiders also have a wide spectrum of personalities.

Their behaviour was once thought to be inflexible and hardwired in their DNA, but researchers have found that variable personality in individual spiders is partly due to mating experience.

Wolf spiders live and hunt alone but they engage in a unique courtship dance, often employing multiple forms of communication, including reading chemicals signals in female spun silk to find out if she is receptive, has already mated or even if she has cannibalised other males in the past.

Researchers presented their work in June at the American Arachnological Society meeting at the University of Michigan.