Scientists say your the gut microbiome – the trillion-strong community of microorganisms in your belly – can help predict if you long and healthy life.

US researchers have identified distinct signatures in the gut microbiome that are associated with either healthy or unhealthy ageing trajectories.

This uniqueness is strongly associated with microbially-produced amino acid derivatives circulating in the bloodstream, suggestive of life-extending chemicals.

This knowledge means microbiomes can be used to predict survival in a population of older individuals, according to the experts. 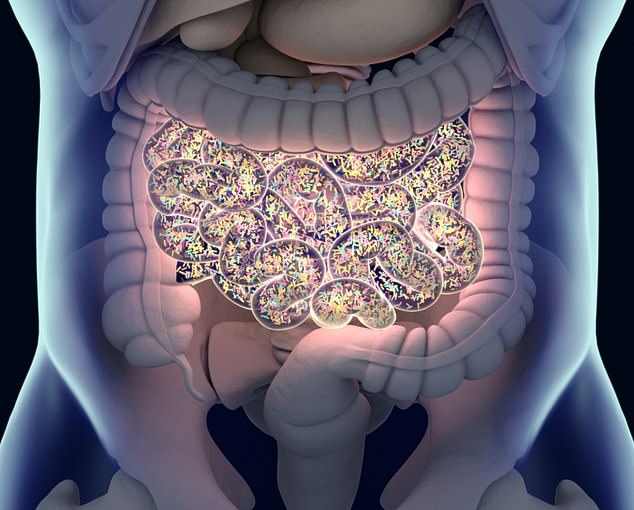 The human microbiome is composed of communities of bacteria (and viruses and fungi). Data from more than 9,000 people reveal a distinct gut microbiome signature that is associated with healthy ageing and survival in the latest decades of life

Living inside of your gut are 300 to 500 different kinds of bacteria containing nearly 2 million genes.

Paired with other tiny organisms like viruses and fungi, they make what’s known as the microbiota.

Like a fingerprint, each person’s microbiota is unique: The mix of bacteria in your body is different from everyone else’s mix.

It’s determined partly by your mother’s microbiota – the environment that you’re exposed to at birth – and partly from your diet and lifestyle.

The bacteria live throughout your body, but the ones in your gut may have the biggest impact on your well-being.

They line your entire digestive system. Most live in your intestines and colon.

There is evidence it affects everything from your metabolism to your mood to your immune system.

Researchers say adult gut microbiome continues to develop with advanced age in healthy individuals, but not in unhealthy ones.

‘Prior results in microbiome-ageing research appear inconsistent, with some reports showing a decline in core gut genera in centenarian populations, while others show relative stability of the microbiome up until the onset of ageing-related declines in health,’ said study co-author Dr Sean Gibbons at Institute for Systems Biology in the US.

‘Our work, which is the first to incorporate a detailed analysis of health and survival, may resolve these inconsistencies. Specifically, we show two distinct ageing trajectories.

‘One, a decline in core microbes and an accompanying rise in uniqueness in healthier individuals, consistent with prior results in community-dwelling centenarians, and two, the maintenance of core microbes in less healthy individuals.’

The gut microbiome is an integral component of the body, but its importance in the human ageing process has been unclear.

The research team analysed gut microbiome, phenotypic and clinical data from more than 9,000 people between the ages of 18 and 101 years old across three independent cohorts.

The team focused in particular on longitudinal data from a cohort of more than 900 community-dwelling older individuals between 78 and 98 years old, allowing them to track health and survival outcomes.

The data showed that gut microbiomes became more and more unique and divergent from other people’s microbiomes as they got older, starting in mid-to-late adulthood.

This corresponded with a steady decline in the abundance of core bacterial genera (e.g. Bacteroides) that tend to be shared across humans.

While microbiomes became increasingly unique to each individual in healthy ageing, the metabolic functions the microbiomes were carrying out shared common traits. 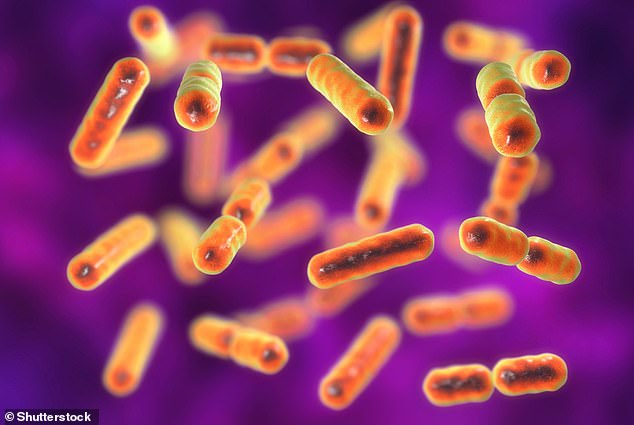 The data showed that gut microbiomes became increasingly unique (i.e. increasingly divergent from others) as individuals aged, starting in mid-to-late adulthood, which corresponded with a steady decline in the abundance of core bacterial genera (e.g. Bacteroides) that tend to be shared across humans. Pictured in artist’s impression, Bacteroides fragilis, one of the major components of normal microbiome of human intestine

This gut uniqueness signature was highly correlated with several microbially-derived metabolites in blood plasma, including one – tryptophan-derived indole – that has previously been shown to extend lifespan in mice.

Blood levels of another metabolite – phenylacetylglutamine – showed the strongest association with uniqueness.

Prior work has shown that this metabolite is highly elevated in the blood of people aged 100 and over.

‘Interestingly, this uniqueness pattern appears to start in mid-life – 40-50 years old – and is associated with a clear blood metabolomic signature, suggesting that these microbiome changes may not simply be diagnostic of healthy ageing, but that they may also contribute directly to health as we age,’ Wilmanski said.

The study has been published in the journal Nature Metabolism.

Personalised diet plan based on healthy plant-based foods and tailored to your gut microbiome ‘could help reduce your risk of obesity, type 2 diabetes and cardiovascular disease’

Diets rich in healthy plant-based foods are linked to gut microbes that are associated with a lower risk obesity, type 2 diabetes and cardiovascular disease, according to a new study.

An international team of researchers led from London analysed the diet, health and gut microbiomes of more than 1,100 participants from the UK and the US.

The findings suggest that people might be able to optimise their health by choosing the best foods for their unique biology as to best alter their gut microbiota.

In fact, the team are working on a commercial application, in which people will be able to get their own gut bacteria analysed and receive customised dietary advice.

‘As a nutritional scientist, finding novel microbes that are linked to specific foods, as well as metabolic health, is exciting,’ said paper author and nutrition scientist Sarah Berry of King’s College London.

‘Given the highly personalised composition of each individual’s microbiome, our research suggests that we may be able to modify our gut microbiome to optimise our health by choosing the best foods for our unique biology.’