The Earth’s ‘vital signs’ have taken a turn for the worse, with climate change driving the health of the planet past ‘tipping points’ which cannot be reversed, scientists say.

Researchers have published a new study – itself an update from findings first published in 2019 – that shows 16 of the 31 Earth’s vital signs that researchers look at, including greenhouse gas concentration, ocean acidification and ruminant livestock, have recently set new records.

This comes despite the downturn seen in 2020 as a result of the pandemic.

‘There is growing evidence we are getting close to or have already gone beyond tipping points associated with important parts of the Earth system, including warm-water coral reefs, the Amazon rainforest and the West Antarctic and Greenland ice sheets,’ said the study’s lead author, Oregon State University researcher William Ripple in a statement.

The Earth’s ‘vital signs’ are getting worse and there is evidence that many of them are close or have surpassed their ‘tipping points,’ a new study says 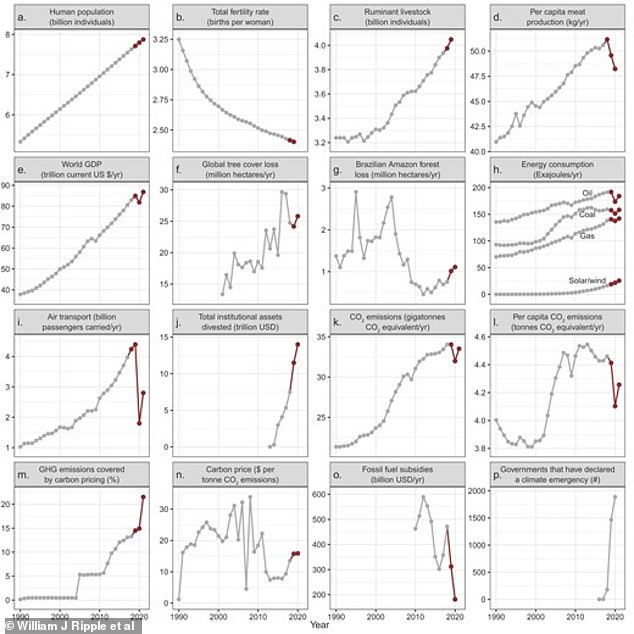 16 of the 31 Earth’s vital signs that researchers look at, including greenhouse gas concentration, ocean acidification and ruminant livestock, have recently set new records. 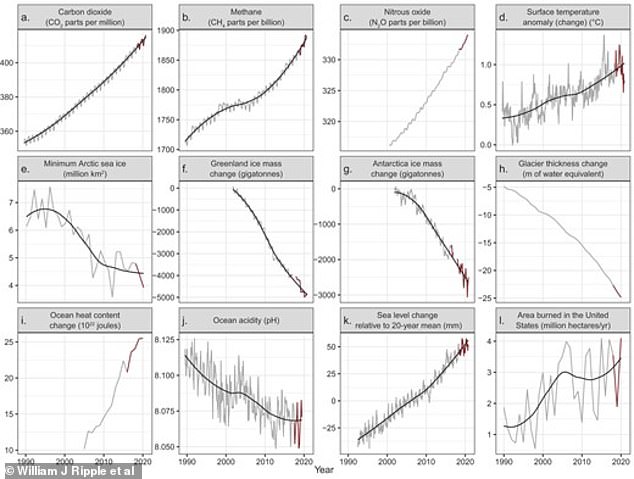 Ripple and his co-author, Christopher Wolf, say the continued downturn in the indicators ‘largely reflect the consequences of unrelenting business as usual,’ citing the surge in climate-related disasters since 2019, including floods, heat waves and ‘extraordinary storms and wildfires.’

Last month, NASA said global air pollution rates fell by 15 percent due to the global COVID-19 lockdowns, as consumers reduced their carbon footprints and people around the world reduced their use of fossil fuels. 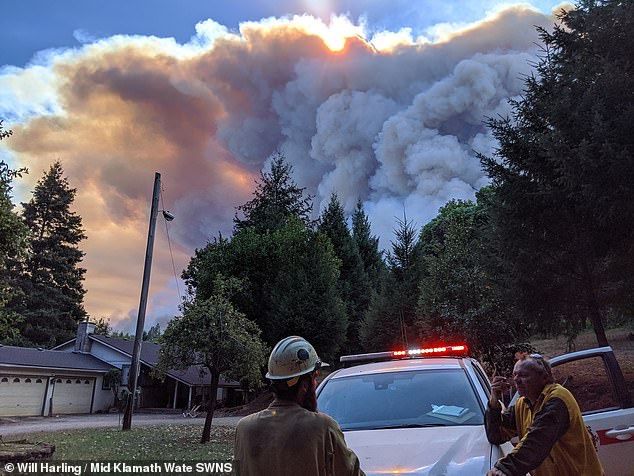 The continued downturn in the indicators is ‘largely reflect the consequences of unrelenting business as usual,’ the study said, citing the surge in climate-related disasters since 2019, including floods, heat waves and ‘extraordinary storms and wildfires’

Despite the decrease during the period, there were troubling signs that emerged out of 2020.

In January, experts from the World Meteorological Organization said that 2020 was one of the three hottest years on record, with global temperatures up 2.3 degrees Fahrenheit on pre-industrial levels.

The five hottest years on record have all occurred since 2015.

When coupled with the aforementioned increase in natural disasters, the continued rise of carbon dioxide, methane and nitrous oxide levels, all of which have set records for both 2020 and 2021 and it’s become a powder keg situation that needs immediate attention.

‘We also need to stop treating the climate emergency as a stand-alone issue – global heating is not the sole symptom of our stressed Earth system,’ Ripple said. ‘Policies to combat the climate crisis or any other symptoms should address their root cause: human overexploitation of the planet.’

In April 2021, carbon dioxide concentration reached 416 parts per million, the highest ever recorded, the statement noted.

Other findings from the study include that there are now more than 4 billion ruminant livestock with an equivalent mass of more than all the humans and wild animals on the planet.

Methane emissions released from cattle are a primary source of greenhouse gases, though scientists are tracking the emissions from the cattle to attempt to breed versions with fewer emissions.

The researchers also found that the forest loss from the Brazilian Amazon reached a 12-year high in 2020, with the loss of 1.11 million hectares deforested and ocean acidification is near an all-time high, threatening coral reefs.

A few bright spots include fossil fuel subsidies continuing to decline and the record high of intuitional asset divestitures of fossil fuels.

The scientists say that climate actions taken by governments around the world should focus on ‘social justice,’ reducing inequality, going so far as to finance climate mitigation and add climate education to school curriculum.

‘The carbon price needs to be linked to a socially just fund to finance climate mitigation and adaptation policies in the developing world,’ Ripple said.

‘We need to quickly change how we’re doing things, and new climate policies should be part of COVID-19 recovery plans wherever possible. It’s time for us to join together as a global community with a shared sense of cooperation, urgency and equity.’

The updated study was published Wednesday in the scientific journal BioScience.