A single new fossil can change the way we think about human origins, but discovering it — deep in a cave or buried in rock — remains a daunting struggle for hammer-wielding paleoanthropologists.

“It can take years and luck to find the right one,” said Aurélien Mounier, a paleoanthropologist at the French National Museum of Natural History.

Now researchers like Dr. Mounier are using computers and mathematical techniques to reconstruct the appearance of fossils they have yet to find. On Tuesday, Dr. Mounier and Marta Mirazón Lahr, a paleoanthropologist at the University of Cambridge in Britain, unveiled a virtual skull belonging to the last common ancestor of all modern humans, who lived in Africa about 300,000 years ago.

The rendering of this ancestral skull, described in the journal Nature Research, is strikingly similar to fossils of about the same age found in East Africa and South Africa. The scientists propose that modern humanity arose through a merging of populations in these two regions.

“We’re starting to look at the paleontological record in a different way,” Dr. Mounier said. “We’re more aware of a lot of diversity and complexity.”

The ancestry of all living humans can be traced to Africa. Studies of DNA indicate our common ancestors lived somewhere on the continent between 260,000 and 350,000 years ago.

But how those early humans evolved is an enduring puzzle. The fossil record in Africa from that period doesn’t offer easy answers. Over the decades, researchers have found just a few remains, with a strange mixture of traits.

In 1986, for example, paleoanthropologists discovered a fossil in Kenya between 270,000 and 300,000 years old. They called it “archaic Homo sapiens.” Other experts argued it belonged to another species altogether. And others have simply thrown up their hands.

Two years ago, a team of scientists working in Morocco offered a major new clue. They discovered a set of fossil remains, about 315,000 years old, that belonged to Homo sapiens — the oldest remains of our species yet found.

But these humans were different from modern humans in some important ways. They lacked chins, for example, and had a long, low braincases.

Dr. Mounier and Dr. Lahr aimed to understand how enigmatic fossils from around Africa are related to modern humans. The researchers developed mathematical techniques to compare the structure of the skulls, searching for evolutionary links.

The first challenge was the fact that people today do not share perfectly identical skulls. From person to person, there is a lot of variation. Populations have slightly different skull shapes on average, but those averages can be misleading.

“We know that within a population, there can be much more variation than between two populations,” Dr. Mounier said. “We’re all very similar, and yet we’re all very diverse.”

No one person’s skull can stand in for everyone’s. So Dr. Mounier and Dr. Lahr worked their way backward from this modern diversity to what they believe was the skull of a common ancestor.

They took CT scans of 260 skulls of people from a wide range of populations — from the inhabitants of African rainforests to Pacific islands to the coasts of Greenland. They also scanned 100,000-year-old skulls found in Israel that are clearly similar to those of living humans.

The researchers also picked out a selection of extinct human relatives, such as Neanderthals, to study in the same way. 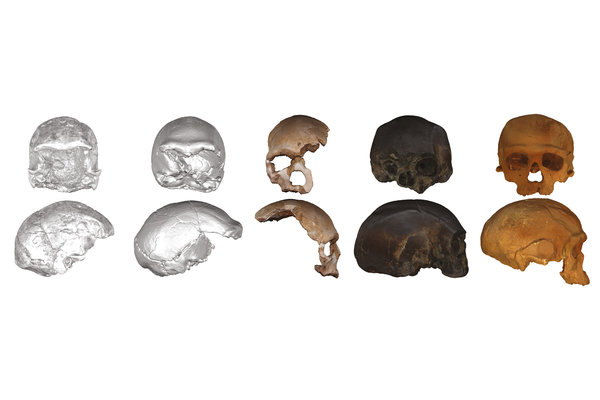 Then the scientists placed all of these living and extinct individuals on an evolutionary tree. In doing so, they were able to trace the evolution of skulls along each of the branches, arriving at a picture of the skull of the common ancestor of living humans.

“More or less, it’s quite a modern human,” Dr. Mounier said of the skull. “But it doesn’t really correspond to any current population — it’s something different.”

The rendering of this ancestral skull shows the same vaulted braincase that we have today. But it also has heavier brow ridges and a protruding lower face.

Dr. Mounier and Dr. Lahr compared their ancestral skull with real African fossil skulls from the same period. The researchers found a number of differences — so many, in fact, that they think the fossils belong not to a single population, but to three.

The Moroccan fossil belongs to one population. Another fossil, found in Tanzania, represents the second. The third population includes two fossils from two sites that are thousands of miles apart: South Africa and Kenya. This third population, the researchers concluded, most closely resembles the ancestor of modern humans.

The evolutionary lineage that gave rise to modern humans produced a number of populations across Africa around 350,000 years ago, Dr. Mounier and Dr. Lahr speculate. These humans all had big brains and made increasingly sophisticated tools.

But there were clear differences in their anatomy. In Morocco, for example, early Homo sapiens had a very Neanderthal-like appearance. “It’s clearly not the closest candidate to play a role in the evolution of modern humans,” Dr. Mounier said.

The populations from which the Moroccan and Tanzanian fossils come from may have died out without contributing to the gene pool of living humans.

But other groups may have come into contact from time to time and interbred. That’s what may have happened to ancient humans in East and South Africa. “The idea is that they merged to eventually form our species,” Dr. Mounier said.

Katerina Harvati, a paleoanthropologist at the University of Tübingen in Germany who was not involved in the new study, called it “a really great way to test hypotheses about the fossil record.”

But she cautioned that any reconstruction of our common ancestor depends on the skulls scientists examine. Along with the fossils from Israel, she would like to see other fossils of modern humans added to the analysis.

The additional data might alter the virtual skull — and perhaps even theories about our origins.

Dr. Mounier sees the new study as a framework for studying human origins, not the last word. “There are a lot of things we can do, even without new fossils,” he said.

Carl Zimmer writes the “Matter” column. He is the author of thirteen books, including “She Has Her Mother’s Laugh: The Powers, Perversions, and Potential of Heredity.” @carlzimmer • Facebook