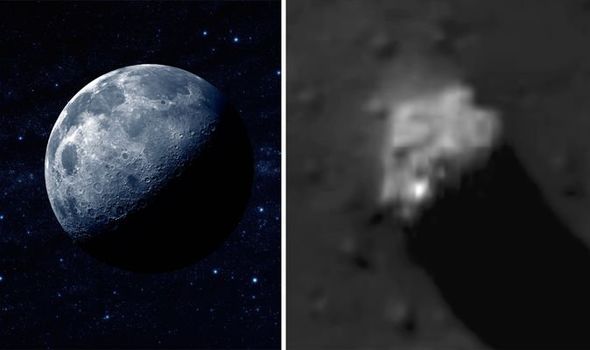 Despite there being no scientific evidence to support the notion that aliens live on the Moon, some conspiracy theorists are still convinced by the idea. And the latest image which supposedly shows a base on the surface of the Moon will do nothing to dampen enthusiasm of proponents of the alien-Moon theory. The image seems to show a large opening on the surface of the lunar satellite, partially covered by a large structure.

Mr Waring wrote on the website ET Database: “The structure has 90 degree angles and you can also see its incredible thickness.

“This is a ship and a building combined. It wasn’t designed for looking sporty or for battle, but instead appears to be made mostly for being a mobile home of sorts, able to move from planet to Moon at a whim.”

This is not the first time such a structure has been claimed to have been found on the lunar surface.

Some conspiracy theorists claim the Moon could be occupied by aliens and that is the reason NASA has not returned since the Apollo missions ended in the 1970s.

They suspect findings such as this pyramid and other anomalies could be monuments built by an ancient alien civilisation similar to the pyramids and other structures on Earth.

Similar UFO hunters have found what they believe could be pyramids on Mars and other parts of the Moon. 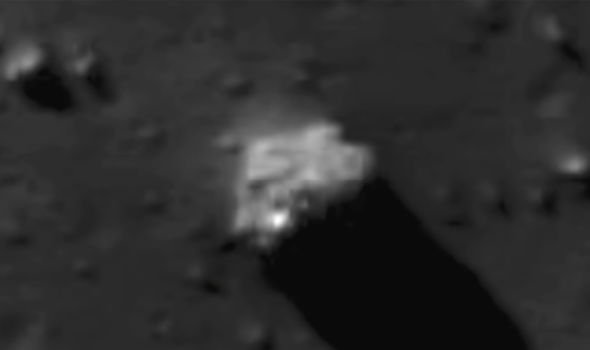 One popular, but far-fetched, conspiracy theory claims our ancestors who built the pyramids were visited by superior aliens who helped them construct them.

However, sceptics and NASA say the pyramid and other similar findings are just the effects of pareidolia – a psychological phenomenon when the brain tricks the eyes into seeing familiar objects or shapes in patterns or textures such as a rock surface.