Older male elephants have an important role to play in the survival of the species by passing on their skills and knowledge to younger males, a study of African elephants suggests.

Matriarchs lead groups of daughters and their calves, while males grow up and leave the herd.

And their loss by poaching or hunting could have “disastrous impacts”.

The study, published in the journal Scientific Reports suggests older bulls are likely to occupy a similar role in male society as matriarchs in female breeding herds.

“It has long been known that older females make more effective leaders of breeding herds due to their enhanced experience – we provide compelling support for a similar role of older males in the male society,” said Connie Allen of the University of Exeter and charity Elephants for Africa. 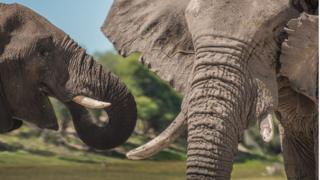 The researchers investigated the behaviour of more than 1,250 male African savannah elephants travelling to and from the Boteti River in the Makgadikgadi Pans National Park, Botswana.

Mature adult bulls were more likely to travel at the front of groups of males, suggesting they may be important leaders with valuable ecological knowledge.

The idea that lone older males do little for the survival of the species has been used as an argument to support the legal trophy hunting of old males.

However, the new research suggests that killing older males could have “disastrous consequences” in removing key figures in male elephant society.

“The oldest bulls, with potentially decades more experience of utilising the environment and navigating crucial resources, in our study were more likely to lead all-male groups,” said Connie Allen.

“Removing these rare, key individuals could have disastrous impacts on the wider bull population and lead to major disruption to intergenerational flow of information in this long-lived species.”

Males were long thought to be largely solitary animals after gaining independence and leaving their family group. But there is growing evidence that males as well as females live rich social lives.

This has been harder to study in male elephants, which roam large distances and are more difficult to track.

Prof Darren Croft of the University of Exeter said the new work highlighted that old male elephants might act as repositories for ecological knowledge such as when and where to find food and water, which may in turn provide survival benefits for the young males who associate with them.

“These findings raise concerns over the removal of old males from elephant populations by trophy hunting and illegal poaching and point to the need to protect old male elephants,” he said.

The sudden deaths of more than 275 elephants in Northern Botswana made headlines earlier this year.

Tests have proved inconclusive, with a range of factors blamed for this mass die-off, including natural toxins.

More than 20 elephants have died in neighbouring Zimbabwe from a suspected bacterial infection or the stress of walking long distances for food and water.

In both cases, poaching has been ruled out.