The bluntnose sixgill is among the most fascinating species of shark due to its uncanny resemblance to prehistoric marine predators. Also known as the Hexanchus griseus or cow shark, this deepwater predator keeps to itself and is not known to attack humans. Since the 1500s, there has only been one documented attack. And yet, marine biologists know very little about this mysterious species, due in no small part to due it living at substantial depths.

The Florida Museum of Natural History in the US said: “This large, deepwater shark is an example of more primitive species found only as fossils.

“It has a broad, flat head, large eyes, and a small, single dorsal fin far along its back.

“Average length is 15 to 16 feet long, and it is grey to olive to brown in colour.

“It feeds nocturnally and ambushes its prey, but because it lives at depths, little is known about it and it is not considered a threat to humans unless it is provoked.” 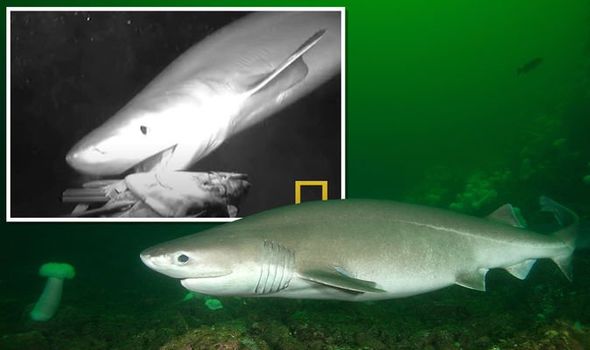 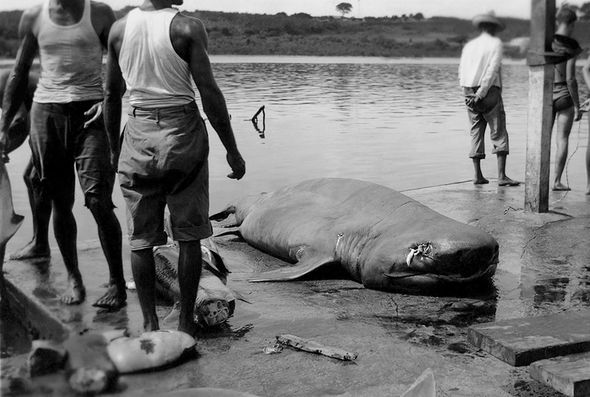 In 2010, a team of researchers at the Osprey Reef off the coast of Australia managed to catch one of these beasts on camera.

The shark was filmed as part of the Deep Australia project, which was an effort to better understand the evolution of human sight.

All life on Earth, after all, began in the planet’s oceans hundreds of millions of years ago.

In the video, filmed by the Queensland Brain Institute and shared by National Geographic, the shark can be seen emerging from the depths, enticed by a severed fish head attached to a camera. 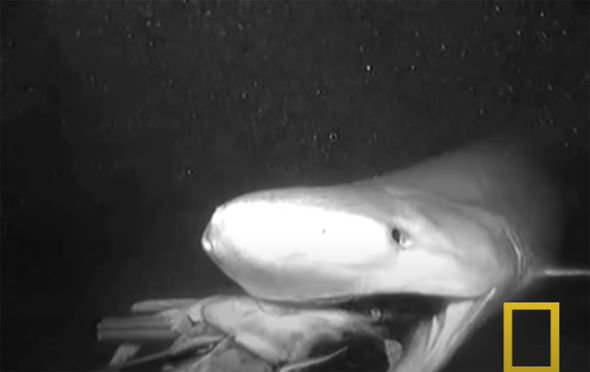 After the shark slowly approaches the bait, it ferociously clamps down to tear chunks out of the fish.

Unfortunately for the shark, the bait was fixed in a way that prevented the shark from having an easy meal.

After struggling to get a substantial bite, the defeated shark swam away.

A National Geographic narrator says in the video: “The sixgill is often referred to as prehistoric because of its resemblance to other sharks that lived hundreds of millions of years ago. 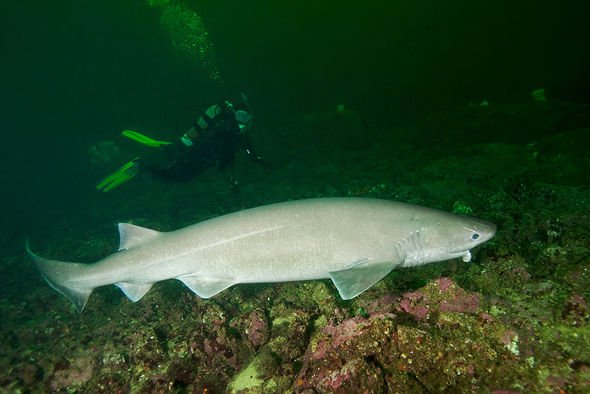 “It’s interesting to researchers because of its night vision and ability to overcome both crushing depths and freezing and deep dark waters.”

Populations can be found in the Mediterranean Sea as well as in the waters stretching from Iceland to Norway to Namibia in Africa.

According to the Florida Museum of Natural History, this is a very migratory species.

The museum said: “This shark is primarily a deepwater species living over the outer continental and insular shelves as well as upper slopes.

“It rests along the bottom during the day to depths of 6,500 feet (2000 m), swimming close to the surface or moving into shallow waters at night to feed.

“The bluntnose sixgill shark is considered a slow but strong swimmer.”

For the most part, the sharks appear to live lonely and solitary lives.