Shell shocked: Colour-changing crabs are becoming so ‘stressed’ by noise pollution caused by passing ships they can’t camouflage themselves to hide from predators, study finds

Colour-changing crabs are becoming too stressed by human-created noise to use their camouflage skills to hide from danger, a new study claims.

UK scientists observed the behaviour of shore crabs, which can slowly change their shell cover to blend in with rocky shores and hide from predators.

But prolonged exposure to the sounds of ships and other underwater noise weakens their ability to do so due to a disruption to their hormone balance, they say.

Crabs that were exposed hourly to ship noise changed their colour half as effectively, turning them into ‘sitting ducks’ for predators such as birds.

The team also found that crabs subjected to ship noise took longer to respond to the sound of birds than normal – or didn’t respond at all. 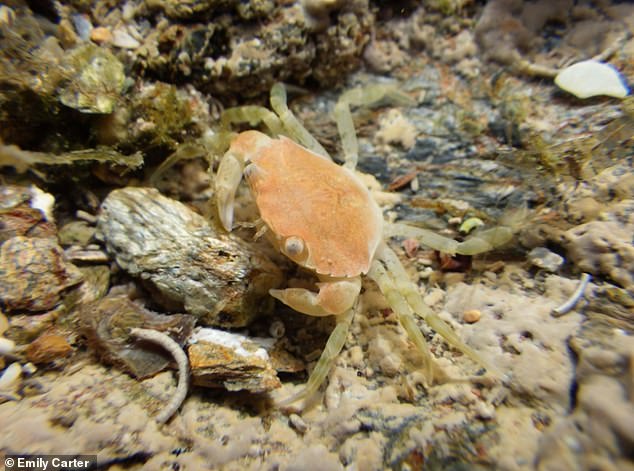 ‘Prior work had shown that ship noise can be stressful for shore crabs, so in this study, we wanted to address how that stress might affect behaviours they rely on for survival,’ said first author of the study Emily Carter, a graduate from the University of Exeter.

‘Colour change in shore crabs is a slow, energetically costly process that’s controlled by hormones that activate specialised pigment cells across their shell.’

Younger shore crabs change colour gradually and tend to make more dramatic changes as they moult – the process of shedding their shell as they grow.

The 71 shore crabs used in the study – all collected from Gyllyngvase Beach in Falmouth, Cornwall – were placed in one of three tanks that were exposed to different noises. 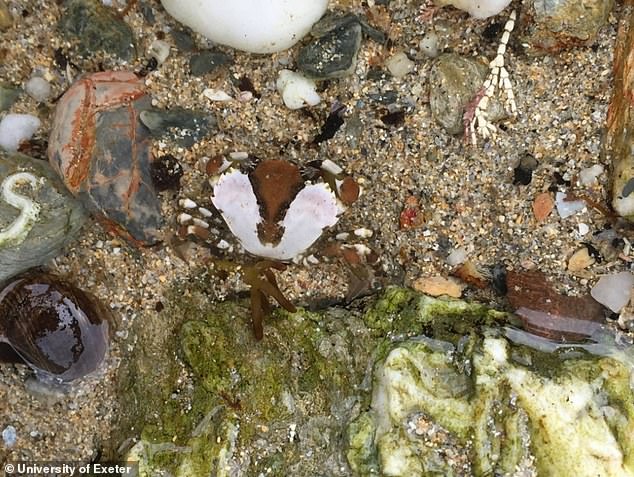 Shore crabs struggle to camouflage themselves when exposed to noise from ships, the research shows

All the crabs, which were dark-shelled at the start, were paler after eight weeks of experiments to match the grey colour of their tanks.

But the results showed the crabs exposed to ship noise – the third group – camouflaged their shells to match their tanks by only half as much as the other crabs.

The University of Exeter team conclude that this disruption to colour change is due to stress and its interference with hormones. 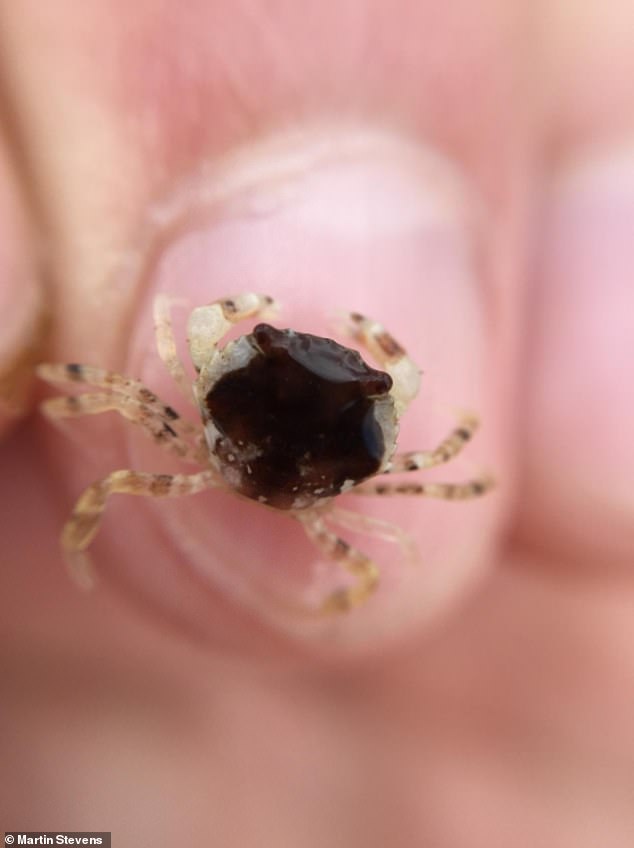 ‘Stress consumes energy and disrupts hormone balance, so we believe that the stress caused by ship noise either drains the crabs of the energy required to change colour properly or disrupts the balance of hormones necessary to make that change,’ said Carter.

Passing ship noises also affected the crabs’ ability to respond to the sound of a predator – in this case recorded bird calls to simulate an attack from a predator.

Those creatures that had been on the receiving end of loud ship noise did not hide in the way they’re normally expected to do. 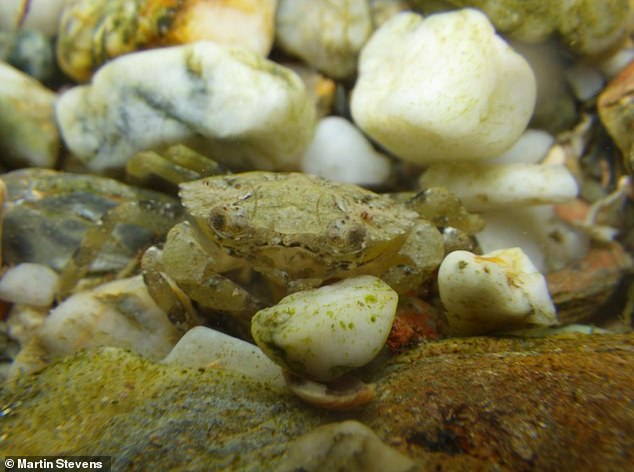 ‘About half of the crabs exposed to ship noise did not respond to the attack at all, and the ones that did were slow to hide themselves,’ said Carter.

‘Similar to how people have trouble concentrating when stressed, the nature of their response indicates that they couldn’t process what was happening, as if that awareness and decision-making ability just wasn’t there.’

Crabs don’t primarily use sound to interact with each other, unlike other species such as frogs or bats who use sound to communicate or hunt.

This means that there are likely to be other species that would be adversely affected by ship noise even more dramatically than crabs.

‘Shore crabs don’t depend heavily on sound – so our finding that noise affects their behaviour and ability to camouflage themselves suggests ship noise might affect a very wide range of species,’ said Carter.

To expand upon this study, which has been published in Current Biology, the research team will now instigate a wider variety of man-made factors – such as other noise pollution and warming oceans – could act as disruptive stressors.

HOW DO ANIMALS CAMOUFLAGE THEMSELVES?

Many different animals have evolved methods of camouflage, making it hard for predators (or prey) to spot them.

This evasion technique has forced many animals to become indistinguishable from their background.

A common example is the snowshoe hare, a white animal that is a brilliant white colour to blend in with the background.

This animal has the remarkable ability to develop a different coloured fur in the summer, to blend in with the changing terrain of its native area.

The arctic fox and the white winter weasel also have a white coat to blend in with the snow.

Octopuses can change both their colour and texture to blend in with the sea bed and rocky outcrops.

Predators have got in on the act too, with the stripes of a tiger and the sandy hues of a lion helping them to blend in with forest and grassland, respectively.