Temperatures in Arctic Siberia were as high as 10°C above normal for June, according to the Copernicus Climate Change Service (C3S).

On average, the entire month was more than 5°C above normal levels, exceeding the previous records set in 2018 and 2019. 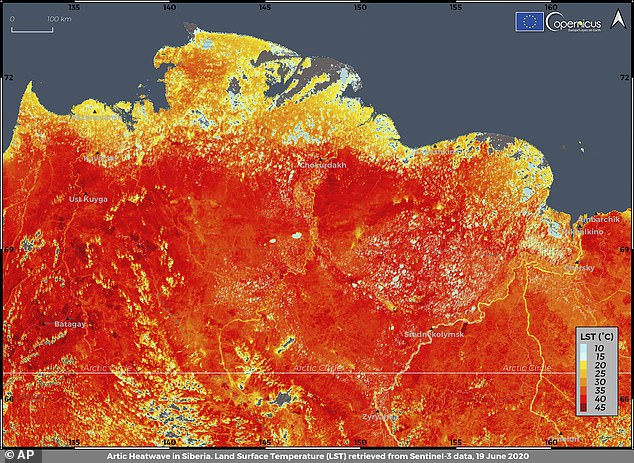 A month of intense fires in the Arctic Circle have also been recorded, even exceeding the record levels of fires seen in the region in June 2019.

Globally, last month was on a par with 2019 for the hottest June on record.

Temperatures were 0.53°C above the 1981 to 2010 average around the world and Europe saw its joint second warmest June on record.

Scientists around the world agree that 2019 was probably the second hottest year in recorded human history.

It is topped only by 2016 — a year which saw an enormous El Nino event elevate the global temperature.

The data also reveals the last decade was the warmest on record, rather unsurprising as the hottest five years of all time occurred in the last five years.

The Copernicus record, NASA and the National Oceanic and Atmospheric Administration (NOAA) all found 2019 to be the second hottest ever.

On the same day, a weather station reported a record temperature of 38°C on the same day – although that has not yet been confirmed.

Director of the C3S at ECMWF, Carlo Buontempo, said: ‘Finding what caused these record temperatures is not a straightforward endeavour as there are many contributing factors interacting with each other.

‘Siberia and the Arctic Circle in general have large fluctuations from year to year and have experienced other relatively warm Junes before.

‘What is worrisome is that the Arctic is warming faster than the rest of the world.

‘Western Siberia experiencing warmer-than-average temperatures so long during the winter and spring is unusual, and the exceptionally high temperatures in Arctic Siberia that have occurred now in June 2020 are equally a cause for concern.’

The higher temperatures and dry soils have contributed to increased fire activity, mostly in the far north-east of Siberia.

The burning fires had resulted in the highest estimated emissions in 18 years of monitoring, with an estimated 59 million tonnes of carbon dioxide released into the atmosphere in June, more than last June’s total of 53 million tonnes.

Experts at the Met Office said the high temperatures in northern Eurasia were due to a combination of climate change and extreme climate variability.