The skull of one of the world’s smallest dinosaurs that measured only two inches long has been found preserved in amber — revealing bulging eyes and 100 teeth.

According to the researchers who identified it — who said that they were ‘blown away’ by the discovery — the winged, bird-like dinosaur ‘looks like it just died yesterday’.

From the quarter-inch-sized specimen — smaller than a blueberry— researchers were able to make a computer-generated model of the dinosaur’s skull.

Despite its size, the miniature creature was a predator that likely fed on bugs some 99 million years ago in what is today Myanmar. 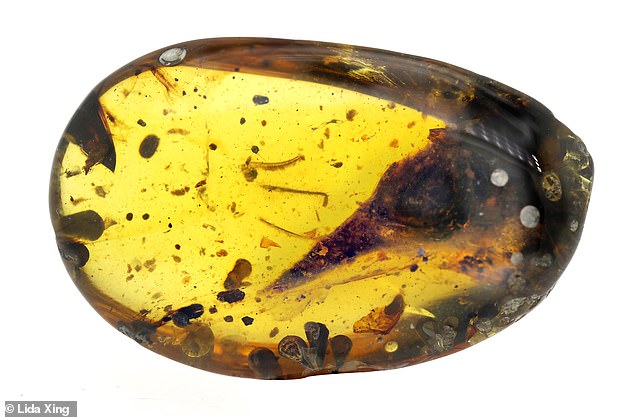 The skull of one of the world’s smallest dinosaurs that measured only two inches long has been found preserved in amber, pictured — revealing bulging eyes and 100 teeth

Named Oculudentavis khaungraae, the bird-like dinosaur died when a blob of sticky tree resin fell on its head — leaving its tiny skull preserved.

The fossil specimen has retained exquisite detail, with its relatively long jaws and razor sharp teeth visible in 3D.

Oculudentavis — whose name means ‘eye tooth bird’ — would have weighed less than an ounce and could have danced in the palm of your hand.

‘I was completely blown away. You can see this beautiful, tiny bird skull preserved within this piece of amber,’ said paper author and palaeontologist Jingma O’Connor, of the Chinese Academy of Sciences.

‘I was going around showing it to everyone, like “look at this, it’s so cool!” ‘

‘To a palaeontologist, it’s weird. We’ve never seen anything like it. I definitely couldn’t keep a lid on this one!’ 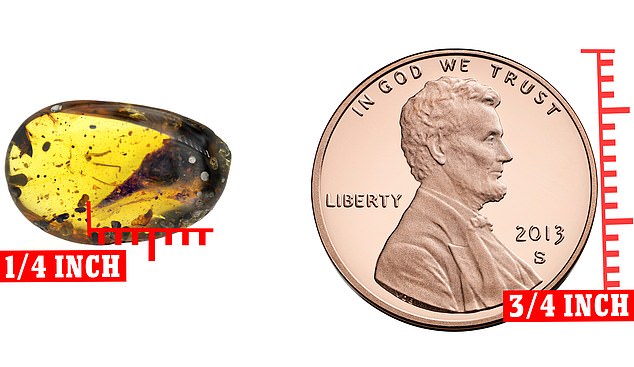 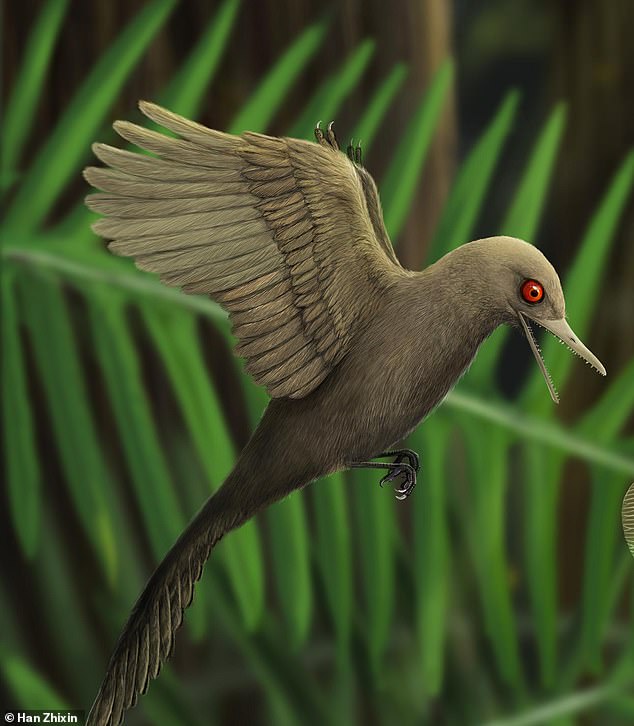 According to Professor O’Connor, the diminutive dinosaur was likely a predator, despite its size — and would have fed on small insects. This was a completely different lifestyle to those of similarly-sized modern birds, which have no teeth and rely on nectar for food

Oculudentavis, she added, shows how dinosaurs came in all shapes and sizes. ‘It’s a little smaller than a bee hummingbird – the smallest bird alive today,’ said Professor O’Connor. ‘The jaws are filled with 100 teeth. It had these weird eyes staring out looking to the sides. There’s nothing like this alive today.’ Pictured, an artist’s impression of Oculudentavis

‘The jaws are filled with 100 teeth. It had these weird eyes staring out looking to the sides. There’s nothing like this alive today.’

Oculudentavis had large eye sockets, similar to that of a lizard’s, with narrow openings that only let in a small amount of light — suggesting that it was likely only active during the day time.

The specimen also featured a pattern of fusion in the skull bones that had not been seen before.

According to Professor O’Connor, the diminutive dinosaur was likely a predator, despite its size — and would have fed on small insects.

This was a completely different lifestyle to those of similarly-sized modern birds, which have no teeth and rely on nectar for food.

‘Amber preservation of vertebrates is rare, and this provides us a window into the world of dinosaurs at the lowest end of the body-size spectrum,’ said paper co-author Lars Schmitz of the Natural History Museum of Los Angeles County.

‘Its unique anatomical features point to one of the smallest and most ancient birds ever found.’

The stunning discovery adds to the remarkable collection of Cretaceous-period fossils recovered from the amber deposits in northern Myanmar’s Hukawng Valley.

The region has yielded beautiful bird wings, a spectacular feathered tail of a meat eating dinosaur, an entire hatchling bird and even ticks that feasted on dinosaurs. 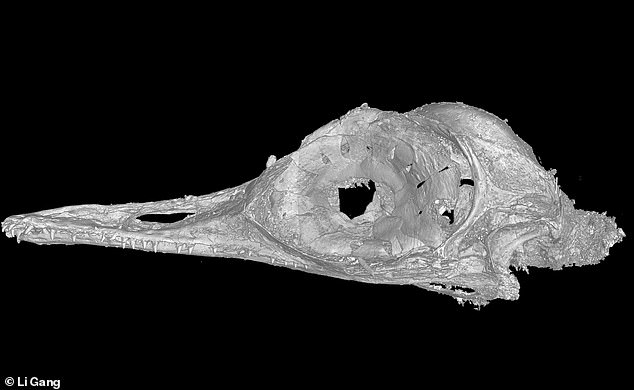 From the quarter-inch-sized specimen — smaller than a blackcurrant — researchers were able to make a computer-generated model of the dinosaur’s skull, pictured

Oculudentavis fills a vital gap in the fossil record, the researchers said, alongside providing new insight into the evolution of birds.

The fossil demonstrates that some avian bodies underwent extreme miniaturisation early in the evolutionary process.

‘This discovery shows us that we have only a small glimpse of what tiny vertebrates looked like in the age of the dinosaurs.’

British palaeobiologist Prof Roger Benson, who was not involved in the study, said that the fossil suggests that some of the earliest birds evolved to become miniature — while also illustrating how amber can serve as a window into the distant past.

‘The study of small vertebrates preserved in amber, their ecosystems and their evolutionary relationships with one another is in a nascent phase,’ Professor Benson added.

‘But Oculudentavis suggests the potential for continued discovery remains large — especially for animals of diminutive sizes.’

The full findings of the study were published in the journal Nature. 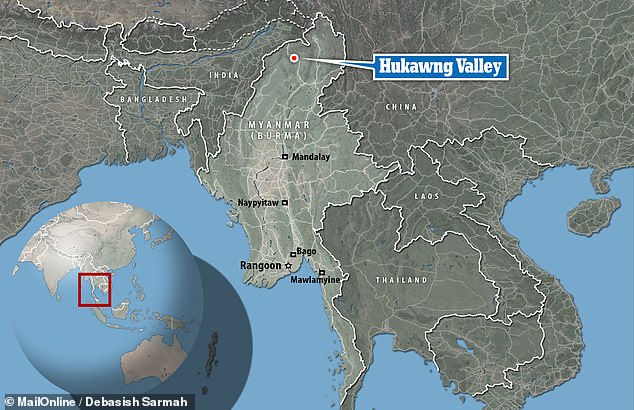 WHAT FOSSILS HAVE BEEN FOUND IN BURMESE AMBER?

Amber, often used in jewellery, is fossilised tree resin, and the oldest dates back more than 300 million years.

In the past few years the Hukawng Valley in northern Myanmar, formerly Burma, has yielded numerous finds.

In January 2017, researchers discovered a 100-million-year-old insect preserved in amber which bore a passing resemblance to ET.

Its features were so odd and unique that researchers placed in into a new scientific order of insects.

The creature had a triangular head and bulging eyes, which is different from any other known species of insect.

The eyes on the side of its head would have given it the ability to see at almost 180 degrees by simply turning its head to the side.

Because of its uniqueness, the insect was assigned its own brand new scientific classification order – called Aethiocarenodea.

In June 2017, researchers revealed a stunning hatchling trapped in amber, which they believe was just a few days old when it fell into a pool of sap oozing from a conifer tree in Myanmar.

The incredible find showed the head, neck, wing, tail and feet of a now extinct bird which lived at the time of the dinosaurs, 100 million years ago, in unprecedented detail.

Researchers nicknamed the young enantiornithine ‘Belone’, after a Burmese name for the amber-hued Oriental skylark.

The hatchling belonged to a group of birds known as the ‘opposite birds’ that lived alongside the ancestors of modern bird.

Archaeologists say they were actually more diverse and successful – until they died out with the dinosaurs 66 million years ago.

They had major differences from today’s birds, and their  shoulders and feet had grown quite differently to those of modern birds.

In December 2017, experts discovered incredible ancient fossils of a tick grasping a dinosaur feather and another – dubbed ‘Dracula’s terrible tick’ – swollen after gorging on blood.

The first evidence that dinosaurs had bloodsucking parasites living on them was found preserved in 99 million-year-old Burmese amber.

The newly-discovered tick dates from the Cretaceous period of 145 to 66 million years ago.