Incredible slow-motion footage shows a Tesla Model 3 being crumpled in high-speed collisions in a series of brutal government crash tests.

The all-electric vehicle weathers heavy front and side collisions on its way to earning a five-star rating in every safety category set by the US National Highway Traffic Safety Administration (NHTSA), which carried out the tests.

Tesla CEO Elon Musk claimed the Model 3 – the company’s first low-cost, high-volume electric car – had a shot at being the safest vehicle ever tested by NHTSA.

The car’s final safety stats, including probability of injury or death during a crash, are due to be published soon, he said.

The Model 3, seen by some as a make-or-break car for Tesla, has had its fair share of struggles this year, with the company repeatedly failing to meet order demands amid what Musk has called ‘production hell’.

The NHTSA has been crash testing cars since 1979, giving each a safety rating out of five stars to guide buyers in the US.

Tests cover frontal, side and rollover crash scenarios, as well as collisions with a side barrier and a pole.

The rear-wheel-drive version of the Model 3 earned an all-around five-star safety rating from NHTSA – the highest issued by the agency.

It follows in the footsteps of Tesla’s Model S and Model X vehicles, both of which received five-star ratings from NHTSA in the past.

A number of cars have earned the agency’s top rating this year, including the Subaru Legacy and Toyota Camry four-door hybrid.

He wrote: ‘All 5 star are *not* the same . . . “5 star” just means a car met a certain threshold, but injury probability stats (real numbers) tell you by how much.

‘NHTSA will post final safety probability stats soon. Model 3 has a shot at being safest car ever tested.’

Tesla’s crash ratings are bolstered by the lack of an internal combustion engine in their vehicles, which leaves more room for a forward crumple zone.

The company’s electric cars are also resistant to rollovers because their battery packs are stored at the bottom of the vehicle, giving them a low centre of gravity.

The risk of a rollover in a Tesla Model 3 is 6.6 per cent, according to NHTSA, compared to 10 per cent for other, similar-sized cars. 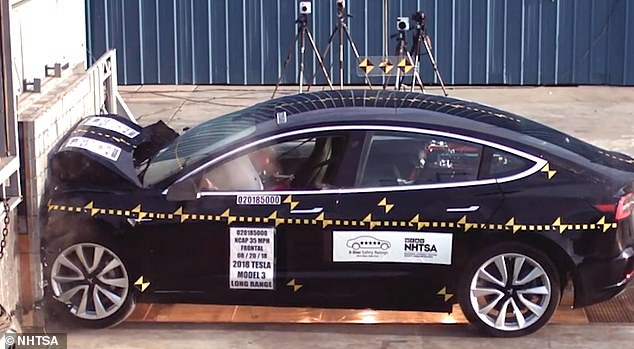 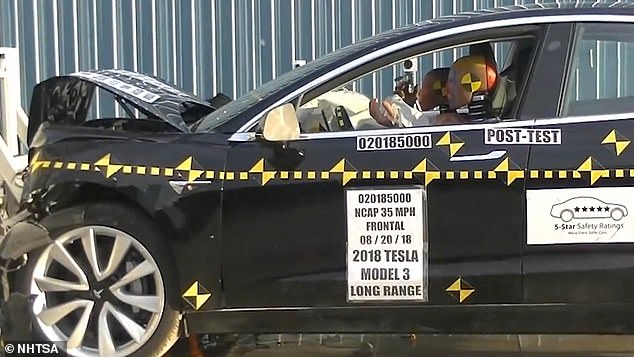 The car weathers heavy front and side collisions on its way to earning a five-star rating in every safety category set by the NHTSA, which carried out the tests

Tesla’s Model 3, its latest car, has proved extremely popular since it entered production in July 2017.

But the company has been marred by delays, hitting its production goal of 5,000 cars per week in July 2018 – six months later than planned.

Musk admitted last week that his car company was facing some logistical problems with deliveries.

WHAT IS TESLA’S MODEL 3 ELECTRIC CAR?

The electric sedan is crucial to Tesla’s goal of becoming a profitable, mainstream automaker.

The five-seat sedan will travel 215 miles (133 kilometres) on a single charge.

It will be sporty, accelerating from zero to 60mph (0-100kph) in under six seconds.

The car has no traditional dashboard, but instead a computer monitor in the center of the car which shows details about the car and its route.

It will be controlled via a touchscreen and each side of the steering wheel will have a single scroll button.

But the company has suffered production woes ever since, frequently missing the targets it set itself when the vehicle was announced in 2016.

A customer tweeted at Tesla and its creator complaining that the delivery of her purchased car kept getting pushed back.

She claimed the vehicle’s arrival date was now ‘delayed indefinite’.

Twitter user Megan Gale shared a picture of dozens of Tesla vehicles sitting in a railroad garage, complaining that she’s yet to receive hers.

‘There are 42 Tesla’s sitting at the Union Pacific Railroad in SLC. My car is one of these. 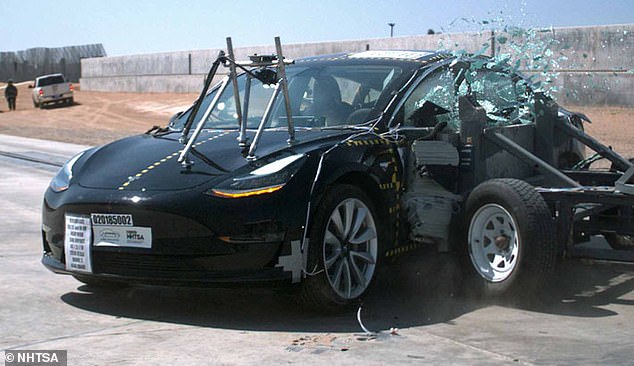 Pictured is a side crash carried out on the Model 3 by the NHTSA. The agency has been crash testing cars since 1979, giving each a safety rating out of five stars to guide buyers in the US 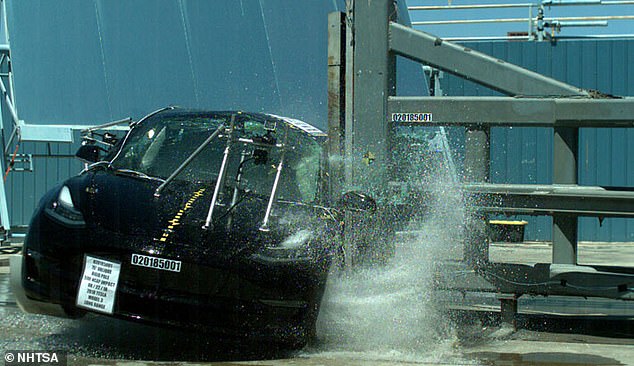 Tests cover frontal, side and rollover crash scenarios, as well as collisions with a side barrier and a pole (pictured)

‘As a day 1 res/owner… With another Performance Model 3 on order as well… I feel like being an early adopter meant nothing.

‘Frustrated barely begins to cover it, and silence from my delivery adviser. I can’t wait until October, as I have no car. I just need my car,’ she added.

‘Sorry, we’ve gone from production hell to delivery logistics hell, but this problem is far more tractable. We’re making rapid progress. Should be solved shortly,’ he replied on Twitter. 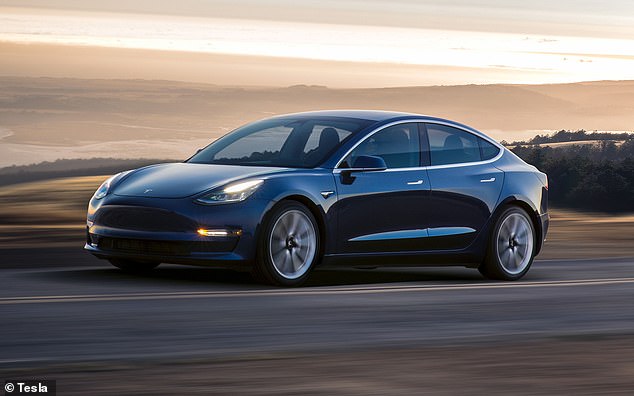 The Model 3 (file photo), seen by some as a make-or-break car for Tesla, has had its fair share of struggles this year. The company has repeatedly failed to meet order demands amid what Musk has called ‘production hell’