Sit up straight! Smartwatch that sounds an alarm every time you slump at your desk is being developed by scientists to combat bad posture

German scientists are developing a smartwatch to correct bad posture.

Engineers at TU Kaiserslautern and the German Research Centre for Artificial Intelligence are building a prototype of their vision, which would alert wearers to slouching.

Using sensors worn under clothes and inside shoes, it would monitor angular velocity, which is the rate of change of angular position of a rotating body.

It would then process this data against motion parameters, such as how much the spine moves and at what angle, then issue an alert if the posture was insufficiently upright. 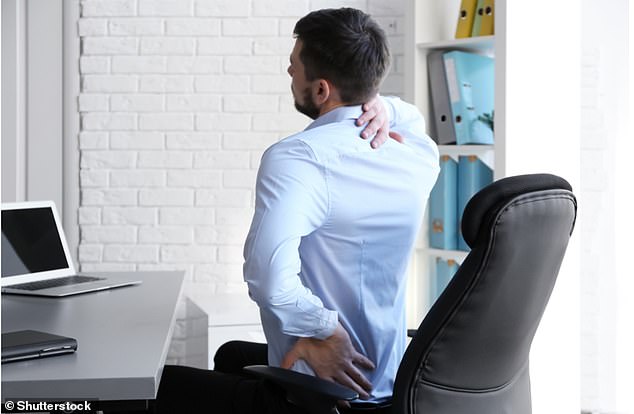 Engineers at TU Kaiserslautern and the German Research Centre for Artificial Intelligence are building a prototype of their vision, which would alert wearers to slouching (stock)

Using sensors worn under clothes and inside shoes, it would monitor angular velocity.

It would then process this against motion parameters, such as how much the spine moves, to what extent it moves and at what angle.

Then, once this data was calculated, it would issue an alert if the posture was not sufficiently upright.

Ideally, the recipient would respond by sitting up straighter.

Although still in an embryonic stage of development, a rudimentary model is expected to be presented at the IFA International Consumer Electronics Fair in Berlin, next month.

The ambition is that the device would train people into better aspect while working at their desks or watching TV, for example.

Officially part of the EU BIONIC project, which ‘adapts gamification strategies to the needs and wishes of the elderly workers, ensuring optimal engagement for prevention and self-management of musculoskeletal health in any working/living environment.’

The German project, which is still unnamed, will be co-developed by experts in Spain, the Netherlands and Greece.

If successful, it could benefit millions of people. Lower back pain is now the leading cause of disability in the UK, responsible for more than one in 10 of all serious health complaints.

It costs the NHS £2.1 billion annually and is estimated to cost the UK economy around £10 billion in lost working days and informal care.

Not that it’s an entirely new concept, of course. News of the idea comes shortly after details of high-tech ‘smart’ pyjamas, which would monitor heartbeat and breathing.

The cotton nightwear is equipped with sensors that can detect the sleep quality of the wearer but will cost between £75 and £150 ($100 to $200).

Five self-powered sensors sewn into the shirt’s lining will provide continuous monitoring of breathing patterns and the amount of REM sleep the person gets.

The sensors are connected by wires made from thread thinly coated in silver so they are completely undetectable for the wearer. Signals collected from the five patches are sent to a tiny circuit board that looks and functions like an ordinary button.

The button has a built-in Bluetooth transmitter that sends the data wirelessly to a computer for analysis.

Still in its early stages, the scientists, from the University of Massachusetts, are in the process of ensuring the sensors are accurate for a variety of body sizes.

HOW TO PREVENT ‘iPAD NECK’

Pad neck occurs when users slump over a tablet while it rests in their laps without any back support, such as while sitting on a bench or on the ground.

Professor Szu-Ping Lee, from the University of Nevada, Las Vegas, said: ‘Using these electronic devices is becoming a part of our modern lives.

‘In order to reduce the risk of developing long-term neck and shoulder problems, we need to think about how technology like tablet computer affects human ergonomics and posture.’