Exorcists who have dedicated their lives to purge people of their demons often have gruesome tales of cases that could come straight out of a horror film.

Daily Star Online has spoken to many exorcists and several claim to have encountered the same pattern of creepy things in victims of possession – levitations, unusual strength, and the eyes of victims turning jet black.

But not all cases are the same and some descriptions stick out for their levels of danger, violence, or sheer terror.

Here are some of the most extraordinary things exorcists claim to have seen during their fight against darkness.

Possessed victim levitates onto the ceiling

In the first clip, at the top, a Catholic exorcist describes a case in which a woman was said to float all the way up to the ceiling – and stay stuck up there for six hours.

Ron Feyl-Enright, a Catholic exorcist who claims to have been involved in 800,000 cases, told The Conspiracy Show with Richard Syrett that it was the only time he saw something so unbelievable during his lengthy career.

Claiming it "defies the laws of gravity", he explains how levitations happen.

He said: "They would actually be hovering just overhead and it’s a series of prayers and focusing in on what is actually taking place, focusing in would be where the priest would be largely responsible along with his assistant and any investigators that were in the room.

"Because everyone is praying. And so, the individual would slowly, slowly come down, we had one individual that was up there for six hours and no-one knew, really, what to do.

Buddhist exorcist Paul Devlin said his first-ever case was a terrifying experience and one of the worst of his career.

He described a woman in the thrall of a demon as having "barbed wire hair" while her eyes, usually brown, were jet black and full of malice. 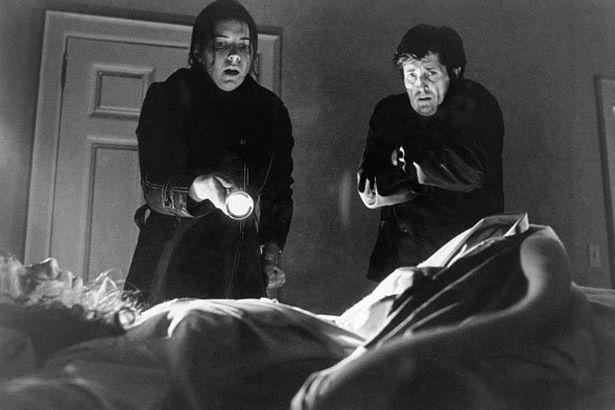 He described the room as "heavy" with the power of the demon inside her, talking in his podcast The Day the Exorcist Called.

Despite his inexperience at the time and fearing he could kill her, Paul said he managed to successfully “dissolve” the demon.

The change in the woman was “beautiful”, he added.

"Her brown hair had returned, it was shiny and bouncy – not barbed wire in appearance like it was before," he said.

Exorcist Reverend Bill Bean has more than a decade of experience in the field – and says he has lived through plenty of hairy cases in his time.

He told Daily Star Online his most "disturbing" case involved a woman's body contorting and her features becoming snake-like.

“In a case in San Diego, this woman’s eyes changed to a yellowish, greenish type of colour and had these reptilian-looking slits for her pupils," he said.

“I will never ever forget that.”

Continuing with the gruesome detail, he added: “Her body was withering around like a serpent, like a snake, and contorting in ways that a human body can’t.

“I’m happy to tell you that God worked through me to deliver her but I will never ever forget that.”

Although he has performed numerous exorcisms, Reverend Bill says that was “one of the more disturbing ones” he has encountered in his career.

Many exorcists claim that people fully under the power of a demon appear to exhibit superhuman strength and it takes a team of people to restrain them.

But exorcist Bob Larson claims that one woman became so strong she was actually able to "throw" a man across the room.

In an interview with Daily Star Online, he recalls that the tiny and "mentally troubled" woman suddenly became a dangerous force to be reckoned with.

At just 40kg, she was puny, and yet Bob says he saw her pick up a guy and "throw him across the room".

He added: “She was mentally troubled but in this particular case it was more than a mental health issue.

“These are very dramatic outbursts.

“It is when we confronted the demon and told the demon to leave the women, that’s where the retaliation took place because the woman was fighting to take control of her.”