Snake eyes: Serpents hunt in the dark by turning body heat from prey into a ‘thermal image’ thanks to a unique organ in their nose

Some snakes have the unnerving ability to strike with deadly force and extreme precision in the dead of night, using the cloak of darkness to snare their prey.

How the reptiles see in such oppressive darkness has long been a mystery, but researchers may have now figured it out.

Heat created by the prey’s body heat is turned into a thermal image by the pit organ of the serpents, which is located in its nose.

Only certain snakes can hunt in the dark, and they all have the pit organ, including boa constrictors and pythons.

The researchers believe the pit organ (left) is key to allowing snaes to hunt in the dark. It likely has a pyroelectric material in its inner membrane (right) which creates a thermal map from the body heat of prey

Researchers from the University of Houston believed the answer to the riddle lay in a phenomenon known as pyroelectricity.

This is seen often in crystals where atoms inside a material become polarised and, as a result, produce an electrical field.

They theorised that if such a material was present, the electrical signals it produced from heat could send a picture of the surroundings to the brain.

However, such materials are extremely rare in biological tissues and had never been found in snakes.

‘We realised that there is a mystery going on in the snake world,’ said Professor Pradeep Sharma, co-author of the study.

‘Some snakes can see in total darkness. It would be easily explained if the snakes had a pyroelectric material in their bodies, but they do not.’

But the team of scientists had previously found a soft material could exhibit the pyroelectric effect when physically moved.

They then applied this thinking to the snake enigma and used a computer model to see how it may work.

They found the pit organ likely acts as an antenna and the cells inside the pit organ membrane have the ability to function as a pyroelectric material.

‘The fact that these cells can act like a pyroelectric material, that’s the missing connection to explain their vision,’ Professor Sharma said.

However, the researchers still do not know the exact way in which snakes do this just the mechanism they likely utilise.

The findings are published in the journal Matter.

A new venomous snake species discovered in Africa has been named in honor of Metallica frontman James Hetfield.

Researchers say the African bush viper boasts a triangular-shaped head and dragon-like appearance that echoes the image of the musician.

The reptile can grow to more than 20 inches long and is covered in strongly keeled, or ridged, scales.

It was first observed in the early 1900s, but its taxonomy ‘was never fully resolved.’ 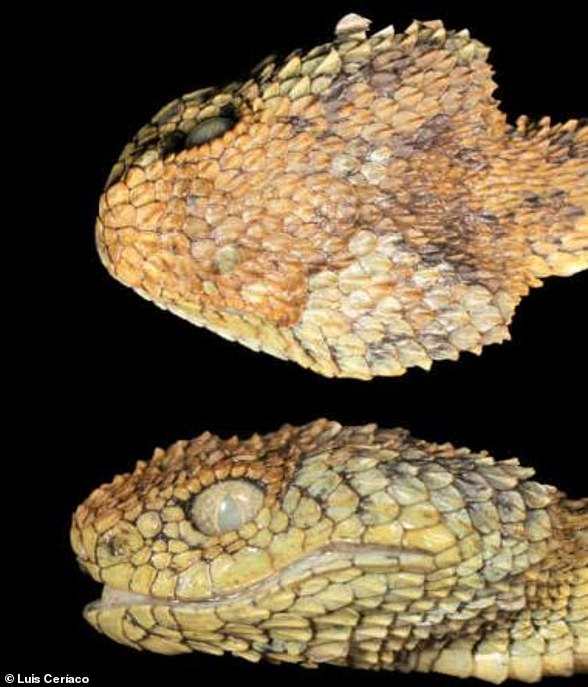