Did ‘snowman’ Arrokoth bring life to Earth? Unusually-shaped space rock formed more than four billion years ago is discovered to contain the building blocks for life

A snowman-shaped space rock that was formed more than four billion years ago and predates every planet in the Solar System may have sparked life on earth, scientists have discovered.

The unusually-shaped object named Arrokoth – the most distant body ever explored by man – was discovered 4.1 billion miles from Earth by NASA’s New Horizons spacecraft, which flew past it on January 1, 2019, while traversing a region beyond the planet Neptune called the Kuiper Belt.

More than a year later, scientists on Thursday offered the fullest description yet of Arrokoth’s composition and origin, based on data collected by New Horizons and transmitted back to Earth through a painstakingly slow process.

The data has offered groundbreaking insights on how the planets were formed as the rock was found to contain organic building blocks, demonstrating that life is possible even in the furthest reaches of the Solar System.

‘Arrokoth is the most distant, most primitive and most pristine object ever explored by spacecraft, so we knew it would have a unique story to tell,’ New Horizons Principal Investigator Alan Stern, of the Southwest Research Institute in Boulder, Colorado, told a media briefing Thursday.

‘It’s teaching us how planetesimals formed, and we believe the result marks a significant advance in understanding overall planetesimal and planet formation.’ 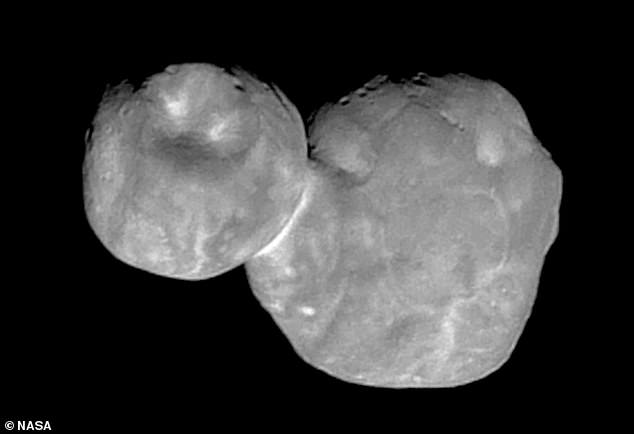 A snowman-shaped space rock named Arrokoth that formed more than four billion years ago and predates every planet in the Solar System may have sparked life on earth, scientists say 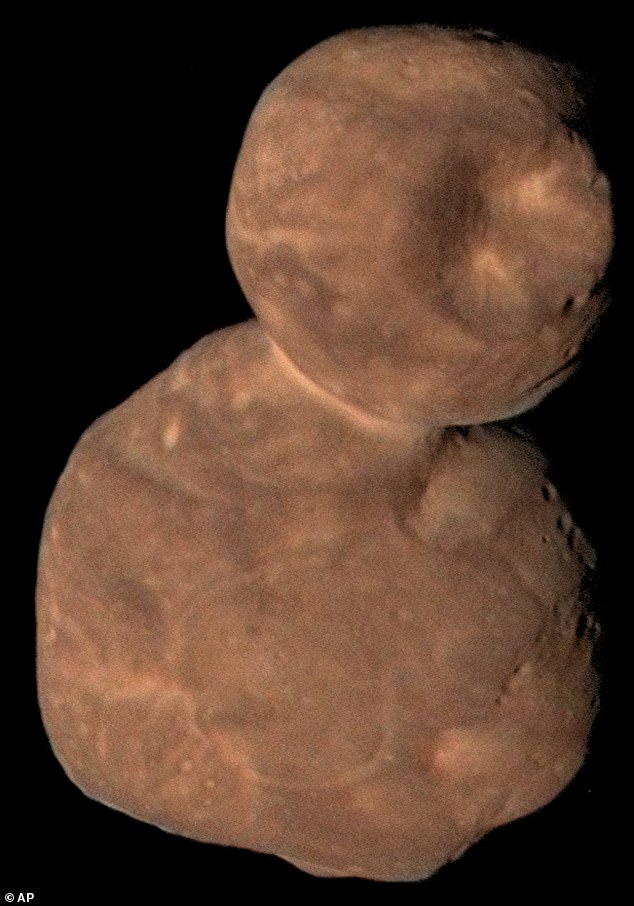 Scientists on Thursday offered the fullest description yet of Arrokoth’s composition and origin, based on data collected by NASA’s New Horizons spacecraft 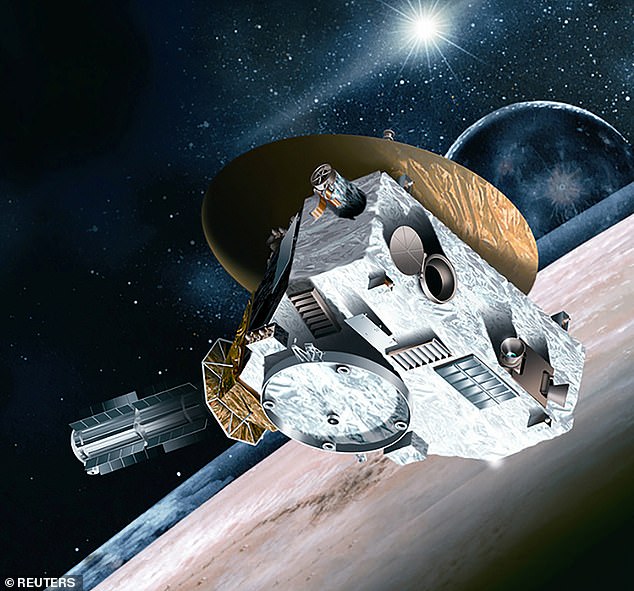 The New Horizons spacecraft (pictured) flew past Arrokoth on January 1, 2019 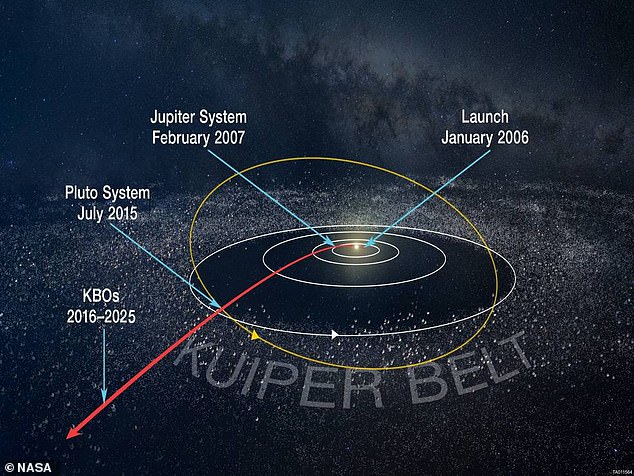 The unusually-shaped space rock – the most distant body ever explored by man – was discovered 4.1 billion miles from Earth in a region beyond Neptune called the Kuiper Belt. A flight path for the mission New Horizons was on when it spotted Arrokoth is pictured

Arrokoth, which is roughly the size of Seattle at 22 miles long and 12 miles wide, boasts a uniformly reddish surface that is smooth and undulating with few craters.

No water has yet been found on the body, which is coated with frozen methanol – a type of alcohol – and unidentified complex organic molecules.

It is classified as a planetesimal, objects that were among the solar system’s original building blocks. These small bodies coalesced at an early stage of the solar system’s formation some 4.5 billion years ago and are a key intermediate size step on the way to building planets.

Arrokoth is comprised of two lobes looking somewhat like giant wheels of cheese fused together by a bridge.

‘It consists of two bodies that appear to have formed in orbit around each other from a local dust cloud, which collapsed under its own gravity within the solar nebula – the huge disk of dust and gas that the solar system formed from,’ said astronomer John Spencer of the Southwest Research Institute in Colorado, one of the researchers in the study published in the journal Science.

‘The two bodies then spiraled in together and merged very gently.’

This suggests that planetesimals formed in localized conditions in which collision speeds were slow rather than from a gradual assembly of widely dispersed objects growing by randomly colliding with each other at higher speeds.

‘So we now have a clearer picture of how planets, including the Earth, were built,’ Spencer said.

‘Planetesimals previously visited by space probes were all badly battered by impactors or cooked by approaching too close to the sun,’ said planetary scientist and study co-author Will Grundy of Lowell Observatory in Arizona, a New Horizons mission co-investigator.

‘So it is thrilling to finally be able to see one still pretty much just as it was after its formation.’

Arrokoth, which is roughly the size of Seattle at 22 miles long and 12 miles wide, boasts a uniformly reddish surface that is smooth and undulating with few craters 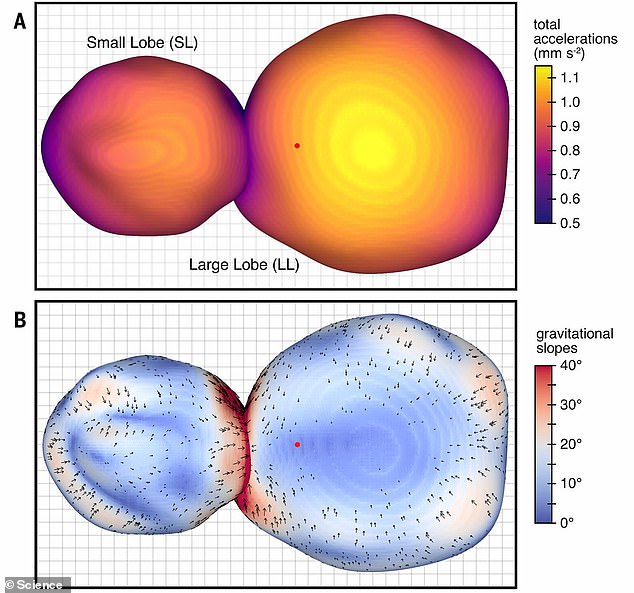 The graphics above, which were included in a study published by a New Horizons research team, show how Arrokoth’s surface qualities are determined by its gravity and rotation

Arrokoth is one of the thousands of small icy bodies inhabiting the Kuiper Belt, the solar system’s vast ‘third zone’ beyond the inner terrestrial planets and the outer gas giant planets.

It was initially nicknamed Ultima Thule given its vast distance from Earth, but the name drew backlash over its Nazi connotations.

The New Horizons spacecraft, which was launched in 2006, is now 316 million miles beyond Arrokoth.

The research team is looking for other potential targets to investigate. Powerful ground telescopes still under construction will help survey this part of the sky.

Emerging technology will enable scientists to develop a mission that could put a spacecraft in orbit around Pluto, three billion miles away, according to Stern.

After a few years, that same spacecraft could be sent even deeper into the Kuiper Belt to check out other dwarf planets and objects, he said.