Home » So You Want to End the Conversation?

With vaccination spreading across the United States, social life has begun to bend toward a semblance of normalcy: dinner parties, restaurants, spontaneous encounters with strangers, friends and colleagues on the street or in the office. It’s exciting but also slightly nerve-racking.

“I think there will be a period of heightened anxiety as we meet people face-to-face again,” Adam Mastroianni, a fifth-year Ph.D. student in psychology at Harvard, told me (over the phone). “I’ve heard this from a lot of my friends, that we're worried: Have we forgotten how to be with other people?”

I’d called Mr. Mastroianni for some help in rediscovering this ancient calculus. In March, he and his colleagues Daniel Gilbert, Gus Cooney and Timothy Wilson published a paper in the Proceedings of the National Academy of Sciences — “Do conversations end when people want them to?” — on one of the stickier aspects of human interaction. Our conversation has been edited for brevity and clarity.

Years ago, I was getting ready for a party and I thought to myself, “I don't want to go to this party, because I know at some point, inevitably, I'm going to be talking to somebody and I’m going to want to stop and go talk to somebody else, and there won't be any polite way of executing that social maneuver. Then I got to thinking: What makes me think that I’m so special? What if the other person feels the same way, and we’re both stuck talking to each other because we mistakenly think the other person wants to continue?

How do you begin to quantify this?

For our paper, we ran two main studies. In the first, we asked a big sample of people to recall the last conversation they’d had and to tell us about it: Was there any point in that conversation when they felt ready for it to end? When was that? Or if the conversation ended sooner than desired, how much longer did they want it to go? And we had them guess those same answers for the other person. In our second study, we brought people into the lab and had them talk to somebody new. Afterward, we asked both people the same questions, had them guess what they thought the other person wanted and compared their responses.

A few things were really consistent. One was that most people reported that the conversation didn't end when they felt ready for it to end; about two-thirds would have preferred it to end sooner. In fact, only 17 percent of people felt the conversation ended when they wanted it to. And those people rarely overlapped; in only 2 percent of conversations were both people satisfied with when it ended.

Two reasons. The first is that people don’t want to talk for the same amount of time; we can’t both get what we want if we want different things. The second problem is that people didn’t know what the other person wanted.

And we can’t easily ask each other and find out: “Hey, I want this conversation to end now, how about you?” It’s the classic Prisoner’s Dilemma, and the prison is politeness.

If people had perfect information — which they could have, if they just told each other what they wanted — we very likely wouldn’t have the disconnect between what people want and what they get.

That sounds a lot like where we are with mask-wearing these days. I’m vaccinated, and highly unlikely to catch or spread the coronavirus. Yet I still wear a mask, even outdoors sometimes — why? Who or what am I protecting?

If I’m running past someone who is wearing a mask, out of politeness to them I’m going to put my mask up. It’s obviously ridiculous. But the fact that they’re wearing a mask suggests to me that they feel that it’s the right thing to do. And I don’t want to signal to that person that I don’t care about their choice or that I think their choice is bad. There’s something that seems kind of confrontational about even passing somebody on the sidewalk who’s wearing a mask when you’re not, and I don’t want to have that confrontation. So I end up doing this thing that I don’t think is actually important; it’s purely signaling deference to another person.

But aren’t you preaching to the converted? Their mask signals that they’re thoughtful, polite and likely vaccinated. It’s hazier when one of you is unmasked: Are they (or you) vaccinated and expressing genuine liberation? Or unvaccinated and expressing, shall we say, independence? The health risk is still negligible. What you really want to know in that moment is, Are you vaccinated? But decorum keeps us from asking directly.

Yeah, it is remarkable how much of a focal point this has become during the pandemic, because it is the single most public thing that you do. It's like wearing a T-shirt that says something on it — but right now we’re all unsure of what the T-shirt says. Do I put it on or do I not?

Your research concluded that basically 98 percent of all conversations end with at least one person dissatisfied with the length. So why do we even bother?

What we’re finding is that the people who said they wanted to continue a conversation were not the people who felt cut off; they still had a lovely time and left wanting more. It wasn’t so much like they felt rejected. It was more, like, I had a delicious piece of cheesecake and I could have had another — but the one that I had was really great, and so I’m feeling good.

You leave the party, or conversation, while you’re still having fun.

It’s better to leave wanting more cheesecake than it is to leave having eaten too much cheesecake.

Also, it turns out that you have much more fun talking to a stranger. When you talk to a friend or your romantic partner, maybe sometimes you argue. When you talk to someone new, you become sort of the best version of yourself, and it’s kind of fun to be that self.

What have you learned personally from your years of studying conversation?

That I should be spending way less time trying to play fourth-dimensional chess in my mind during my conversations, and just try to pay more attention and let them unfold naturally — and take solace in the fact that people really enjoy these conversations, a lot more than they expected to. Conversation is the building block of our social life; it’s part of what makes life worth living, interacting with other humans. The more that we think about ‘Should I stay or should I go,’ the more we drain some of that fundamental joy out of our interactions with other people, you know?

This interview on NPR with Norm Carson, chief executive of an Arizona company that for nearly 40 years has sold audiovisual equipment under the name Covid Inc.: “When Your Company is Named Covid, You’ve Heard All the Jokes.”

How and when to go about viewing the Super Flower Blood Moon of 2021. (Hint: It helps if you live in Oceania, Hawaii, eastern Asia or Antarctica.)

According to researchers at the University of California, Los Angeles, there are at least 65 creatures, including humans, that make a laugh-like sound: “There could be more that, we think, are out there. Part of the reason they probably aren’t documented is because they’re probably really quiet, or just in species that aren’t well studied for now.”

Some of us were wondering — and now we know — why the iPhone’s “snooze” button provides exactly nine minutes of snoozing.

Jill Lepore, in The New Yorker, provides a brief and compelling history of burnout: “May there one day come again more peaceful metaphors for anguish, bone-aching weariness, bitter regret, and haunting loss.”

What went wrong in the Suez Canal, from a fluid dynamics perspective, courtesy of the Practical Engineering channel on YouTube.

All about the “cartoonishly evil-looking” amblypygid, sometimes known as the whip spider or tail-less whip scorpion but which, as Eric Boodman writes in Undark, is “neither spider nor scorpion.”

If you prefer true spiders, there’s this BBC video segment on how some make use of electric fields to get around.

Science in The Times, 100 years ago 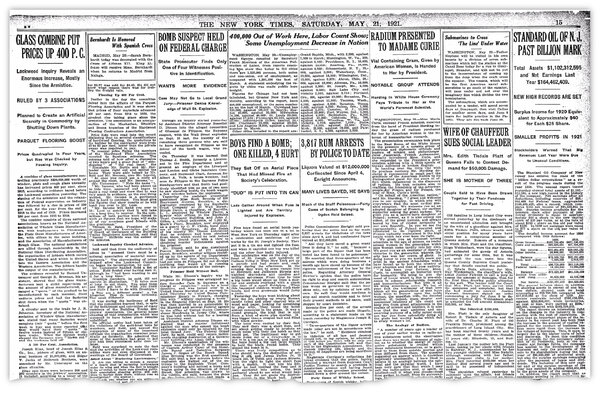 “Mme. Marie Curie, eminent French scientist, received from the hand of President Harding today the gram of radium purchased for her by American women in the interest of humanitarian research…. In handing over the little vial with its precious contents Mr. Harding declared it represented in small part the gratitude of the American Nation to its distinguished guest for the years of effort which culminated in the discovery of radium.”