Some Martian valleys may have formed under ancient ICE sheets on the red planet rather than being forged by rivers, geoscientists claim

Many of the valleys scarring Mars’ surface may have formed by water flowing under ancient ice sheets — rather than being forged by open rivers — a study has found.

Researchers from the US used a special computer algorithm to study thousands of valleys on the red planet — and reveal the processes that formed them.

The team also compared the Martian valleys to the channels found under glaciers in the Canadian Arctic Archipelago — revealing they have striking similarities.

However, an ice-coated ancient Mars would have been more likely to support life, the team said — with an ice sheet offering more stability to the underlying water.

Furthermore, the ice coverage would have offered shelter from solar radiation in the absence of a magnetic field — a shield that Mars lost billions of years ago. 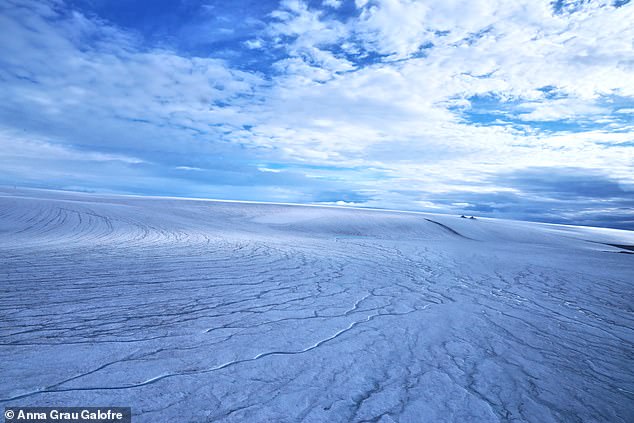 Many of the valleys scarring Mars’ surface may have formed by water flowing under ancient ice sheets — rather than being forged by open rivers — a study has found. Researchers found that the surface of the red planet likely once resembled that of Canada’s Devon ice cap, pictured

Researchers from the US used a special computer algorithm to study thousands of valleys on the red planet — and reveal the processes that formed them (Pictured, with the glacial and sub-glacial valleys shown in yellow and blue, and river-cut valleys in red)

‘For the last 40 years, since Mars’s valleys were first discovered, the assumption was that rivers once flowed on Mars, eroding and originating all of these valleys,’ said paper author and geophysicist Anna Grau Galofre of the Arizona State University.

‘But there are hundreds of valleys on Mars — and they look very different from each other,’ added Dr Grau Galofre, who undertook the research in her former position at the University of British Columbia.

‘Mars is similar, in that valleys look very different from each other, suggesting that many processes were at play to carve them.’

In their study, Dr Grau Galofre and colleagues used a their new algorithm to discern the erosional processes that formed more than 10,000 of Mars’ valleys.

‘These results are the first evidence for extensive sub-glacial erosion driven by channelised meltwater drainage beneath an ancient ice sheet on Mars,’ said paper author and earth scientist Mark Jellinek, also of the University of British Columbia.

‘Only a fraction of valley networks match patterns typical of surface water erosion, which is in marked contrast to the conventional view.’

‘Using the geomorphology of Mars’ surface to rigorously reconstruct the character and evolution of the planet in a statistically meaningful way is, frankly, revolutionary.’ 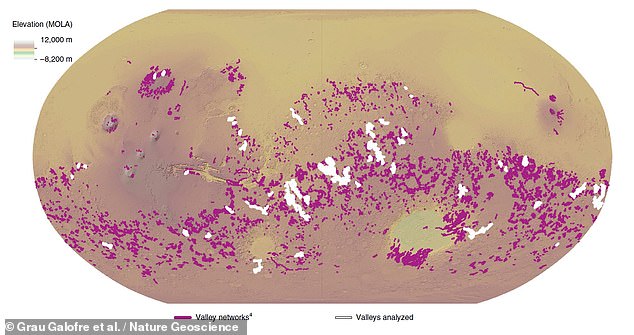 ‘There are hundreds of valleys on Mars — and they look very different from each other,’ said Dr Grau Galofre. Pictured, a surface map of the red planet, with all of its valley networks highlighted (in white, for those analysed by the researchers, with the remainder in purple)

According to the researchers, the findings help to explain how the valleys would have formed 3.8 billion years ago — at a time when the sun was less intense, on top of how Mars is already further away from the Sun than the Earth.

‘We tried to put everything together and bring up a hypothesis that hadn’t really been considered: that channels and valleys networks can form under ice sheets, as part of the drainage system that forms naturally under an ice sheet.’ 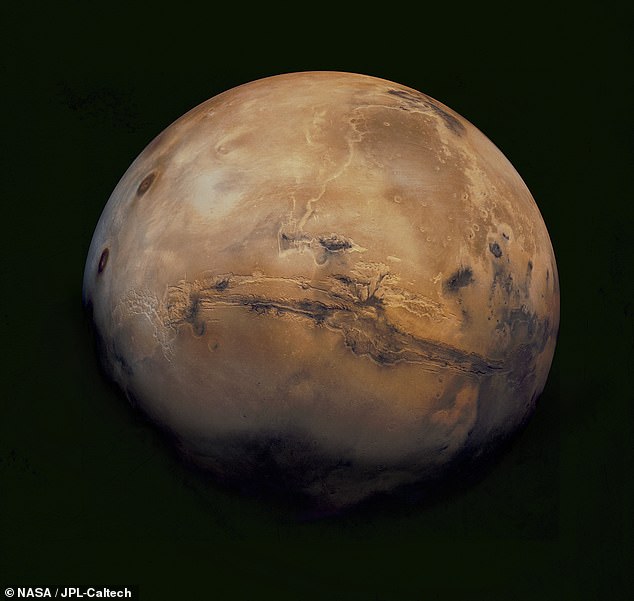 The findings throw ‘cold water’ on the long-standing ‘warm and wet’ hypothesis that suggested ancient Mars sported widespread rainfall, rivers and oceans. Pictured, Mars — including the Valles Marineris canyon system — as imaged by the Viking 1 orbiter 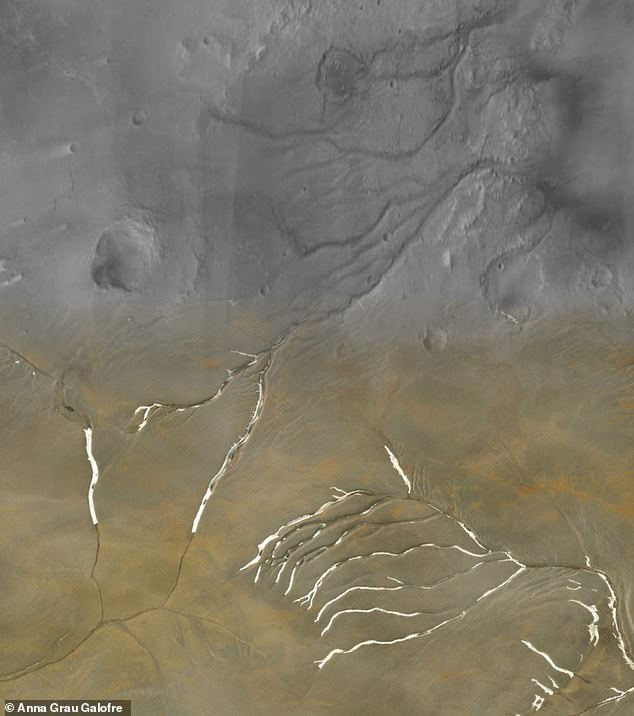 The team also compared the Martian valleys to the channels found under glaciers in the Canadian Arctic Archipelago — revealing they have striking similarities. Pictured, a composite image showing Mars’ Maumee valleys (top) superimposed on the channels of Devon island, north Canada (bottom). The shape of the channels and the overall network are consistent

With their initial study complete, the researchers are now looking to apply their valley-analysing algorithms to the ancient landscapes of Earth.

‘Currently we can reconstruct rigorously the history of global glaciation on Earth going back about a million to five million years,’ said Professor Jellinek.

‘Anna’s work will enable us to explore the advance and retreat of ice sheets back to at least 35 million years ago — to the beginnings of Antarctica, or earlier — back in time well before the age of our oldest ice cores.’

‘These are very elegant analytical tools,’ he concluded.

The full findings of the study were published in the journal Nature Geoscience.

How important is the presence of liquid water?

It is now widely believed that Mars holds a reasonably large volume of water.

However, the surface of the planet is so cold, this water exists only as ice.

In order for life to exist on a planet, many scientists believe it is essential for the world to possess liquid water.

Ever since technology has enabled mankind to gaze at Mars in detail, humans have been looking for indications that there was water on the red planet.

Did water used to flow on the surface of Mars?

The Mariner 9 mission revealed clues of water erosion in river beds and canyons, as well as evidence of weather fronts and fogs on Mars in 1971.

Later missions from the Viking orbiters, which first launched in 1975, revealed yet more details about how water flowed on the surface and carved valleys.

It was claimed the gullies seen on the surface of the planet had to have been formed by flowing water.

Scientists cited the debris and mud deposits left behind as evidence for moving water existing at some point in the history of the red planet.

However, the formation of these gullies has been hotly debated throughout the ensuing years.

Proof of ice in geological samples from Mars

Spirit and Opportunity, the twin rovers, found evidence of the presence of water enclosed in rock in 2007, when one of Spirit’s wheels broke and gorged a piece of stone.

Analysis of the silica-rich layer discovered in the scratch suggested it formed in the presence of liquid water.

In 2008, the Phoenix lander was gathering geological samples, and they disappeared after a few days.

Scientists thought these were pieces of ice. This assessment was confirmed when the lander later detected water vapour in a sample.

In 2012, Curiosity was meandering over an ancient martian seabed when it examined a number of rocks that were exposed to liquid water billions of years ago.

In 2012, Curiosity (pictured) was meandering over an ancient martian seabed when it examined a number of rocks that were exposed to liquid water billions of years ago

These dark streaks populate the areas of Mars with a sharp incline.

Researchers speculated that these may have been caused by the intermittent flow of liquid water down steep banks on the planet.

In June 2013, Curiosity found powerful evidence that water good enough to drink once flowed on Mars. In September of the same year, the first scoop of soil analysed by Curiosity revealed that fine materials on the surface of the planet contain two per cent water by weight.

In 2015, Nasa claimed to have discovered the first evidence of liquid water on Mars in the present day.

The space agency said that its Mars Reconnaissance Orbiter (MRO) provided the strongest evidence yet that liquid water flows intermittently on present-day Mars.

In 2017, Nasa issued another statement rebuking its initial findings.

Features known as recurring slope lineae (RSL) were first identified in 2011 (pictured). These dark streaks populate the areas of Mars with a sharp incline. Researchers speculated that these may have been caused by the intermittent flow of liquid water

It said the dark features that run down steep inclines on the red planet were actually granular flows, where grains of sand and dust slip downhill to make dark streaks, rather than the ground being darkened by seeping water.

Images from the MRO revealed the streaks only exist on slopes steep enough for dry grains to descend the way they do on faces of active dunes.

Also in 2017, scientists provided the best estimates for water on Mars, claiming it once had more liquid H2O than the Arctic Ocean – and the planet kept these oceans for more than 1.5 billion years.

The findings suggest there was ample time and water for life on Mars to thrive, but over the last 3.7 billion years the red planet has lost 87 per cent of its water – leaving the surface barren and dry.

In a study published in the journal Science, ESO researchers have now discovered the first concrete evidence for liquid water on Mars.