Living under a busy flight path could have drawbacks beyond lowering your property value — it could increase your risk of dying from a heart attack, experts have warned.

Researchers from Switzerland analysed thousands of deaths from cardiovascular disease in the area around Zurich airport from 2000–2015.

They found people exposed to night-time noises in the order of 40–50 decibels — similar to the thrum of a fridge — were a third more likely to have heart failure.

For those susceptible, the effect of planes passing overhead can — just like episodes of intense emotion — lead to death within just two hours, the researchers said. 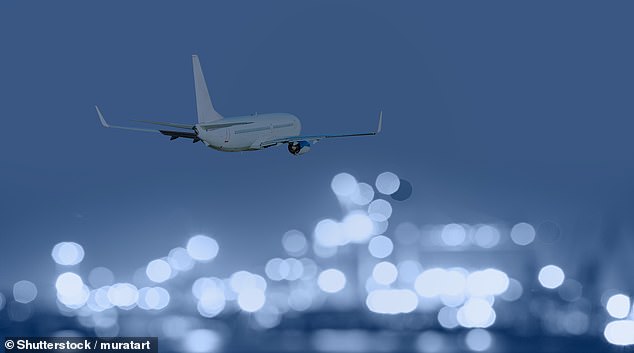 Living under a busy flight path could have drawbacks beyond lowering your property value — it could also increase your risk of dying from a heart attack, experts have warned

‘We found that aircraft noise contributed to about 800 out of 25,000 cardiovascular deaths that occurred between 2000 and 2015 in the vicinity of Zurich airport,’ said epidemiologist Martin Röösli at the Swiss Tropical and Public Health Institute.

‘This represents three per cent of all observed cardiovascular deaths.’

Previous research found that noise pollution is responsible for around 48,000 cases of ischemic (or coronary) heart disease across Europe every year.

In their study, Dr Röösli and colleagues analysed data on 24,886 cardiovascular disease deaths that occurred in the vicinity of Zürich Airport from 2000–2015.

They used a so-called ‘case-crossover’ model to determine whether the subject’s noise exposure around their time of death was unusually high in comparison to sounds levels they experienced at other, randomly-selected times.

To do this, the model combined a record of all aircraft movements in and out of Zurich Airport during the 15-year study period with pre-existing calculations of the noise exposure from different aircraft, travelling on given routes at different times.

‘This study design is very useful to study acute effects of noise exposure with high day-to-day variability — such as for airplane noise, given changing weather conditions or flight delays,’ said paper author and epidemiologist Apolline Saucy.

‘With this temporal analysis approach, we can isolate the effect of unusually high or low levels of noise on mortality from other factors.’

‘Lifestyle characteristics such as smoking or diet cannot be a bias in this study design,’ she added.

The team’s model suggested that the risk of cardiovascular death increases by 33 per cent for those individuals exposed to night-time noise in the order of 40–50 decibels — equivalent to the sound of a refrigerator in operation.

People exposed to night-time noise above 55 decibels — near the volume of normal conversation — had a 44 per cent increase in their risk of cardiovascular death.

For comparison, being subjected to noises over 85 decibels — such as hairdryers, blenders and power tools — continuously for more than 30 minutes can lead to permanent hearing loss.

‘The results are similar to the effects that emotions such as anger or excitement have on cardiovascular mortality,’ Dr Röösli noted.

‘Associations were more pronounced for [women,] for people living in areas with low road and railway background noise — and in buildings constructed before 1970.’

In these cases, the subjects likely had either less insulation to protect them from all sounds — or less background noise to acclimatise to — leaving them more vulnerable to the sound of aircraft passing overhead, the researchers said.

Many airports — including Zurich, as well as London Gatwick and Heathrow — implement a flight curfew to cut back on aircraft-related noise pollution between 11:30 pm and 6:00 am the next morning.

‘Based on our study results, we can deduce that this night-time flight ban prevents additional cardiovascular deaths,’ concluded Dr Röösli.

The full findings of the study were published in the European Heart Journal.