The ultimate balloon ride… to space! Florida-based Spaceship Neptune unveils luxury pod – complete with bar – that travels 20 miles above Earth for $125,000 per person (but at least drinks are included!)

Space Perspective has finalized its design for Spaceship Neptune, a sleek-looking capsule that will offer epic views 20 miles above Earth and luxury amenities – for a hefty price tag of $125,000 per ticket.

Unlike Jeff Bezos’ Blue Origin and Richard Branson’s Virgin Galactic, which utilize a rocket and large plane and therefore have the all the flight turbulence one would expect, Space Perspective promises a smooth and calm experience since its spherical pod is being propelled by a balloon.

The Florida-based company, which is constructing Spaceship Neptune near NASA’s Kennedy Space Center, is planning to offer up to eight passengers at a time the chance to soak up panoramic views of Earth during the six-hour round trip.

Another key difference is that Space Perspective’s capsule will go 20 miles above Earth, as opposed to Blue Origin’s 65 miles and Virgin Galactic’s 50 miles. 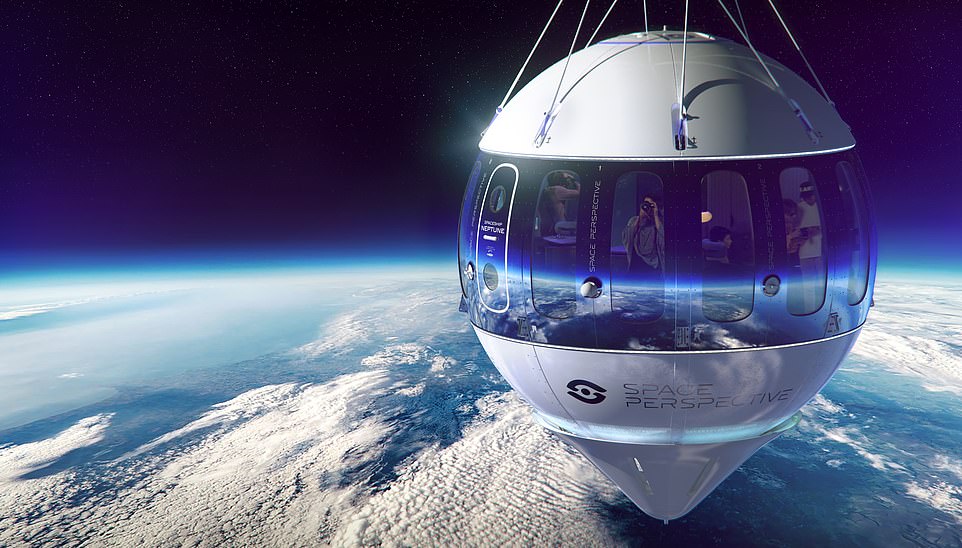 ‘Our proprietary flight system means that the capsule and SpaceBalloon always remain connected, and take-off and landing conditions are always within our control,’ Taber MacCallum, co-founder of Space Perspective, said. Pictured above is the new design 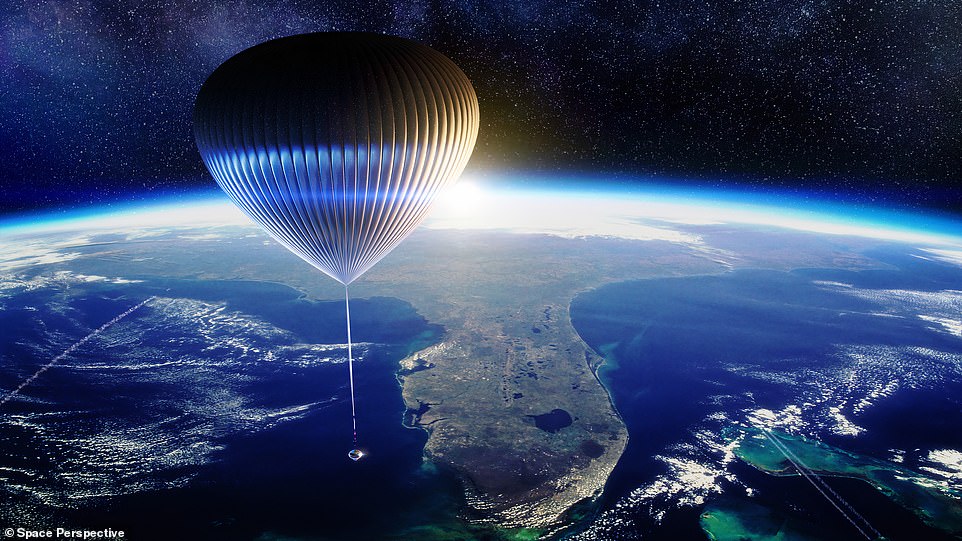 The ultimate balloon ride: Space Perspective will take space tourists on a $125,000 per person, six-hour journey 20 miles above Earth

‘Centuries of balloon and parachute operation and development demonstrate that always flying with the balloon from launch through landing, with traditional parachutes as a reserve backup system, is by far the simplest, safest and most robust solution,’ said Taber MacCallum, founder, co-CEO and CTO of Space Perspective, in a statement.

‘Our proprietary flight system means that the capsule and SpaceBalloon always remain connected, and take-off and landing conditions are always within our control. The team has come together to create an amazingly robust, safe, and incredibly elegant and luxurious system for Spaceship Neptune.’

The larger capsule allowed for a roomier interior that can hold two more passengers than the design shown in October of last year. The interior has deep seats that recline, what the firm calls ‘mood lighting,’ a restroom and a bar. 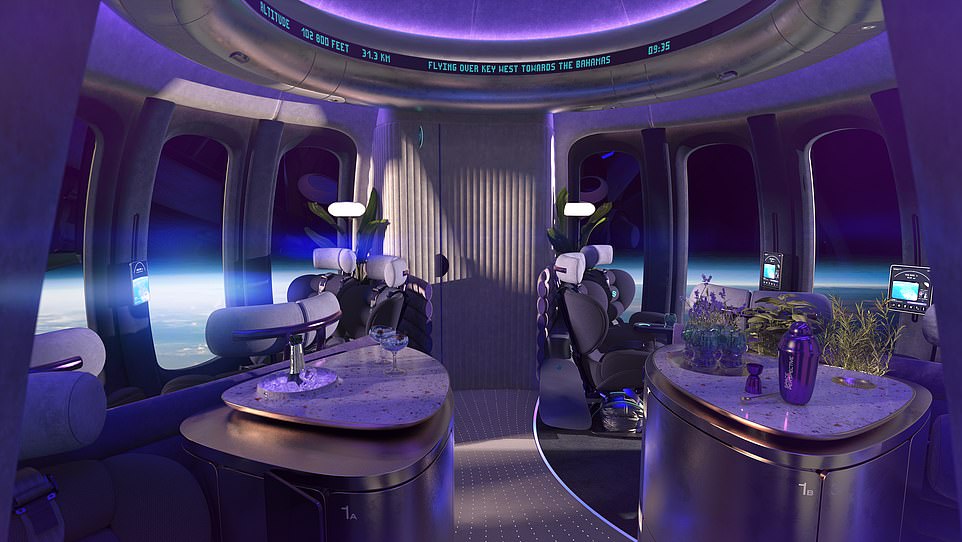 ‘We now also have an exterior aesthetic that is every bit as powerful as the interior … the engineering team have delivered an unsurpassable outcome in relation to performance and safety,’ the company’s lead designers said. Pictured  is a conceptual view of the interior, showing panoramic windows and a bar area 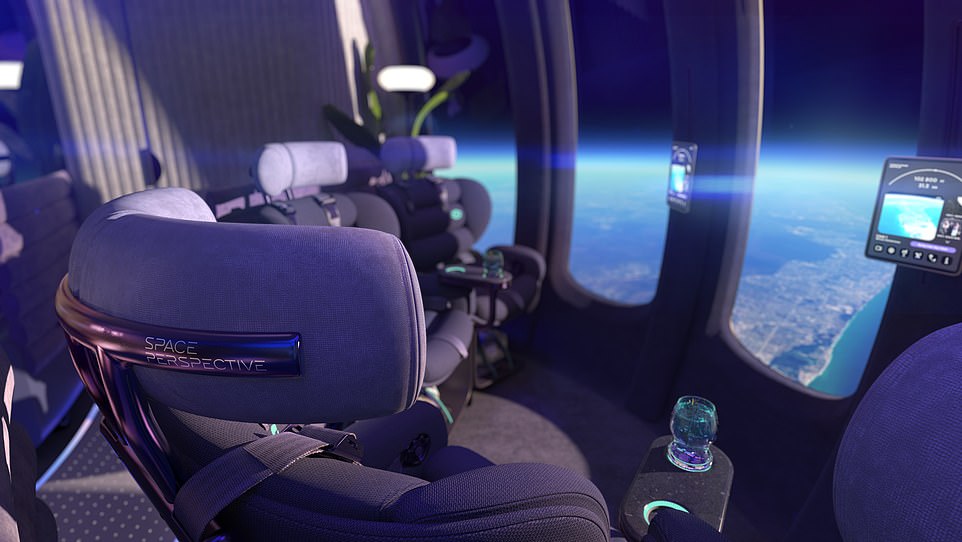 The larger capsule allowed for a roomier interior that can hold two more passengers that previous design shown in October of last year, the Florida-based firm announced. Pictured above is a conceptual view of the interior, showing large reclining seats 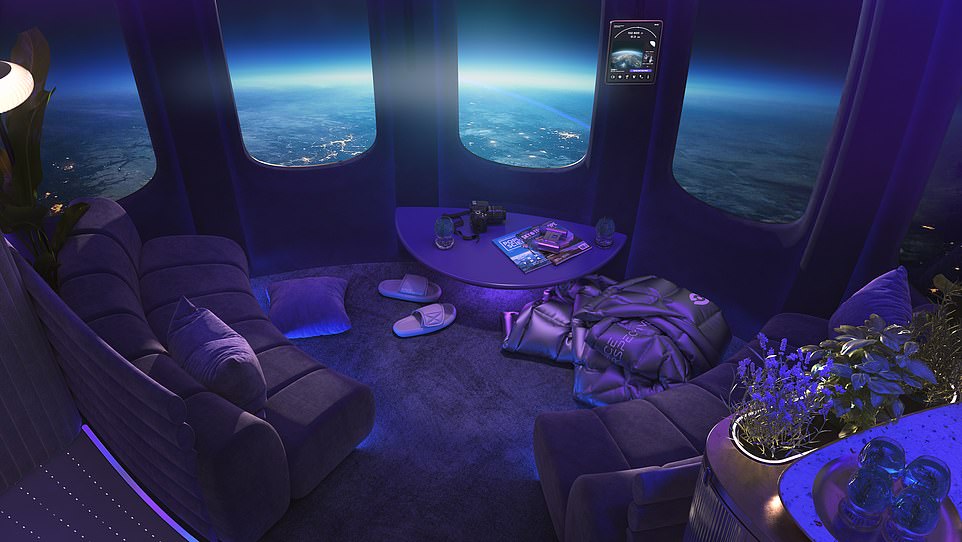 Space Perspective has already sold 900 tickets, has targeted commercial flights to being in late 2024 and is taking reservations for 2025 as well. Pictured above is a conceptual view of  the interior, showing ample space for passengers and their belongings

There will be satellite imagery and 360-degree cameras on the capsule to allow passengers to zoom in and out on our home planet.

Space Perspective has already sold 900 tickets, has targeted commercial flights to being in late 2024 and is taking reservations for 2025 as well.

MacCallum also announced the two team members leading the design team for Spaceship Neptune – Dan Window and Isabella Trani, who have worked on design for the New Tube for London as well as Elon Musk’s Hyperloop train.

‘As design specialists we have integrated the travel experience and aesthetic – from head room and groups of Explorers being able to move around comfortably within Spaceship Neptune from chair to restroom to bar – to, of course, maximizing the once-in-a-lifetime views,’ Window and Train explained.

‘We now also have an exterior aesthetic that is every bit as powerful as the interior … the engineering team have delivered an unsurpassable outcome in relation to performance and safety.’

The experience of seeing Earth from 20 miles up costs $125,000 per person, and bookings are made with a fully refundable deposit beginning at $1,000.

‘The Apollo era inspired two generations of scientists and engineers, not just to pursue careers in space but reminded us that we could do anything we set our minds to,’ Jane Poynter, a co-founder of Space Perspective, previously told DailyMail.com.

‘That was the saying – ‘if we can go to the moon, then surely we can do x.’ Spaceflight has an extraordinary power to inspire people of all ages.’