Home » Science » SpaceX is quietly planning Mars-landing missions with the help of NASA and other spaceflight experts. It’s about time.

SpaceX, the aerospace company founded by Elon Musk, held a hush-hush conference in Colorado this week to formulate a plan for landing people on Mars and building an outpost.

SpaceX reportedly sent invitations to about 60 scientists and engineers, asking them not to publicize the event or their attendance at the workshop. Leaders of NASA’s Mars exploration program reportedly attended, but the agency did not answer Business Insider’s questions about who from its staff was there.

Workshop attendees were asked to participate in “active discussions regarding what will be needed to make such missions happen,” according to Ars Technica.

According to Ars Technica, the workshop may be “the first meeting of such magnitude” in SpaceX’s quest to land humans on and ultimately colonize the red planet. (Though a SpaceX representative told Business Insider in an email, “we regularly meet with a variety of experts concerning our missions to Mars.”)

It’s about time for these discussions, especially if Musk wants to meet his “aspirational” timeline to launch the first human crew toward Mars in the mid-2020s.

“We already have the technology to build rockets and land vehicles on Mars. We’ve been doing that for decades,” D. Marshall Porterfield, the former director of NASA’s Space Life and Physical Sciences Division, told Business Insider. “The main hindrance is the human factor. If you really are going to land a person on Mars, you have to feed them, keep them healthy, and build them habitats.”

What we know about SpaceX’s Mars mission plans

Musk launched SpaceX in 2002 in part because he was frustrated that NASA didn’t have any actionable plan to land people on Mars.

Ever since, his company has been building larger and more cost-effective rockets, accruing staff and cash, and working toward the ultimate goal of colonizing Mars.

Musk first presented an outline for reaching Mars in September 2016, then elaborated on it in October 2017. The plan called for an enormous, fully reusable spaceflight system called the Big Falcon Rocket, or BFR. The 35-story-tall system would have two main parts — a giant spaceship atop a gargantuan booster — and be able to carry up to 100 people to Mars.

SpaceX plans to launch an uncrewed mission to Mars in 2022, followed by the first human explorers in 2024 — a timeline Musk said he felt “pretty optimistic” about at the 2018 South by Southwest festival. He also elaborated on the idea of setting up a permanent Martian colony.

“It will start off building just the most elementary infrastructure, just a base to create some propellant, a power station, blast domes in which to grow crops — all of the sort of fundamentals without which you cannot survive,” Musk said. “And then really there’s going to be an explosion of entrepreneurial opportunity because Mars will need everything from iron foundries to pizza joints. I think Mars should really have great bars: the Mars Bar.”

A diagram showing how SpaceX plans to establish a base and methane-fueling depot on Mars.Elon Musk/SpaceX; New Space/Mary Ann Liebert, Inc. Publishers

Long before trying to colonize Mars, SpaceX will need to pull off its first landings there. Each will require about half a dozen BFR flights to get a spaceship into low-Earth orbit and refuel it.

Construction of a prototype spaceship for the BFR system is now underway and may be test-launched as soon as mid-2019. Even if that effort goes well, SpaceX will still need to secure scores of durable supplies and high-tech equipment — and formulate well-laid plans to use it all.

Workshops with top experts in the spaceflight world could help SpaceX work toward those goals. 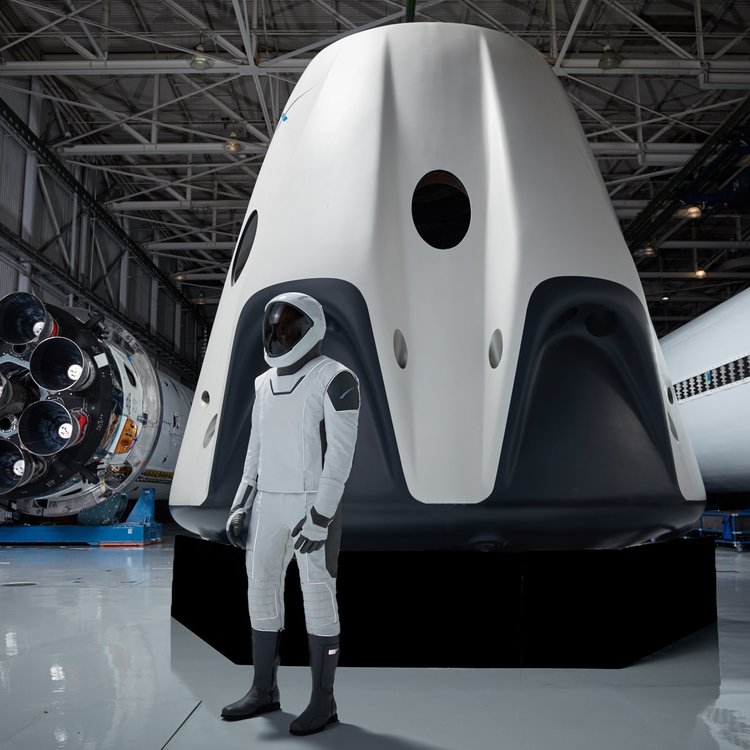 The spacesuit and Crew Dragon spaceship that SpaceX will use to launch NASA astronauts into space.SpaceX

To pull off its initial Mars plans and seed an off-world economy, SpaceX will likely need tens of billions or hundreds of billions of dollars.

SpaceX was awarded about $3 billion in US government awards and contracts to develop its Falcon 9 rocket and Crew Dragon spaceship, with much of that spent to meet NASA’s exacting specifications for flying astronauts. But a Mars mission is far more ambitious — and dangerous.

Musk has not been shy about the high risk of failure. In 2016 he said “the likelihood of death is very high” for the first Mars missions, and for that reason he probably wouldn’t fly there himself.

“Being unafraid to fail has really been what’s helped SpaceX advance so quickly,” Steve Nutt, an aerospace and mechanical engineer at University of Southern California, told Business Insider. “Historically, engineers have learned more from their failures than they have their successes. By far.”

How, exactly, Mars missions would play out and which technologies would be used to keep people alive on the red planet have yet to be described publicly by the company or shared with Business Insider. (We’ve asked SpaceX and Musk, to no avail.)

“They seem to have tackled a huge aspect of it — the rockets, the propulsion, the landing,” Ray Wheeler, an advanced life support researcher at NASA’s Kennedy Space Center who wasn’t invited to SpaceX’s Mars workshop, told Business Insider. “But having an efficient and appropriate habitat for the human, reliable life-support systems, the right spacesuits, and so on? That all demonstrates the complexity of this whole idea.”

Porterfield said he admires SpaceX’s reusable rockets and growing disruption of the rocket-launch industry. But he said that as late as 2016, before Porterfield left NASA to become a professor at Purdue University, SpaceX had “moderate to minimal” interaction with the agency about how to keep people alive in space.

The “Mars Workshop” conference may be SpaceX’s first major attempt to discuss “the elephants in the room,” he said. Porterfield acknowledged that few people know what SpaceX’s 6,000-plus employees are doing, but said that from his recent perspective on the outside, it seems the company has until now not given much thought to deep-space crew survival and mission planning.

“All the contact I’ve had was with aerospace engineers and rocket people,” Porterfield said of NASA’s communication with SpaceX in previous years. “I didn’t see any life support or human health and medicine people.”

The problem of surviving a mission to Mars 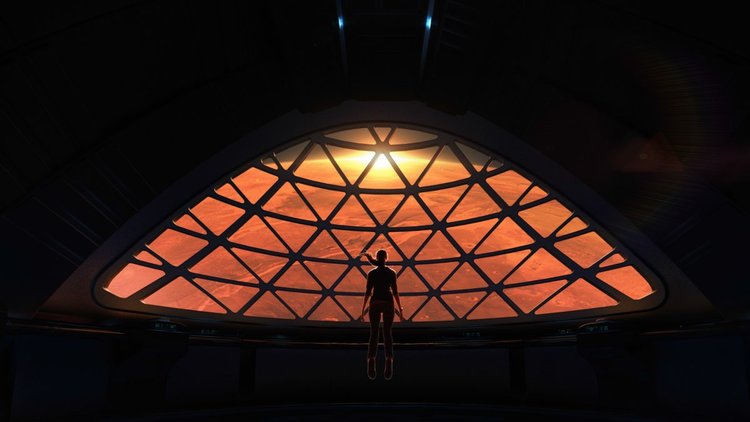 The main hurdles to existing on Mars — having enough food, air, and water — are not surprising, but that doesn’t make them any less daunting.

Mars is an average of 140 million miles from Earth. The two planets line up in their orbits about once every two years, which shortens a yearslong trip between Earth and Mars to six or nine months.

“In a baseline Mars mission, if you go to the surface, you have to stay there. It’s a three-year mission. You have to wait on the surface before the planets realign,” Wheeler said.

By comparison, Apollo missions to the moon took about a week. Missions to the International Space Station can last months, but it can be resupplied with relative ease at 250 miles away.

Porterfield said that the food alone required to feed a ragtag Mars mission crew would amount to 10 tons, based on previous NASA planning. One possible solution to that weight challenge would be to predeliver food supplies years in advance, but that could lead to health problems. Vitamin C, for example, degrades fairly rapidly, so deep-space astronauts might risk developing scurvy.

Water is also very heavy, as are the filters and machinery needed to scrub poisonous carbon dioxide from a spaceship or Mars habitat.

“I don’t now if they’ve assumed all this other stuff is less complex, or if it’s already available, or NASA or other space agencies are already doing this,” Wheeler said of multiple technologies SpaceX will need to pull off a Mars outpost. “Those might be incorrect or somewhat incorrect assumptions.”

A technology called bioregenerative life support, which Wheeler has worked on for decades, could help alleviate or even solve these issues.

The concept is to use biology — an ecosystem of microbes, plants, and even small animals — to scrub carbon dioxide from the air, regenerate oxygen, break down waste, and grow food. A small system could provide productive activities for long, cramped missions (such as gardening) and vital nutrition, Wheeler said. A larger system might constantly supply most of the crew’s air and food, negating the need for resupply missions every couple of years.

“We’re really talking about technology that replaces what the Earth does,” Porterfield said. “This is our current bioregenerative life-support system.” 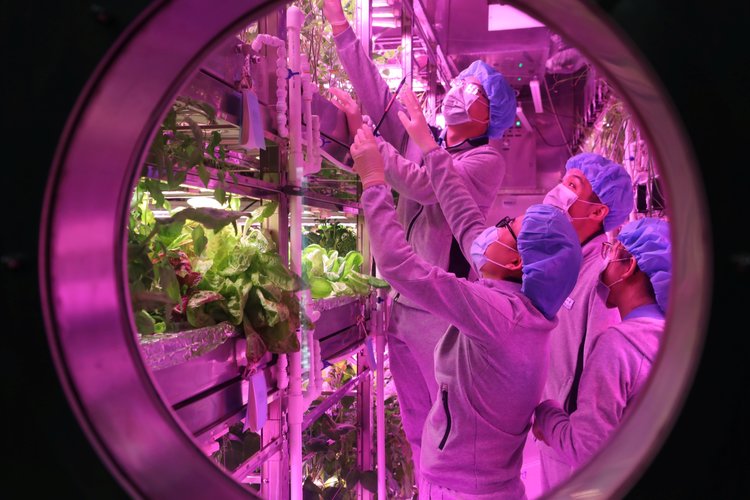 Inside a simulated space cabin in which students live as a part of the Lunar Palace 365 Project, at Beihang University in Beijing. Damir Sagolj/Reuters

But prototypes of this technology, such as China’s Lunar Palace-1 experiment, are very heavy, energy-inefficient, and far from a ready-to-launch state. NASA had plans to do similar experiments, but President George W. Bush’s administration defunded those projects in 2004, and funding for related work has been scarce or nonexistent since.

Keeping the human body healthy in space is another challenge that Porterfield said SpaceX needs to figure out. Floating in microgravity causes bones to weaken and muscles to atrophy, among other physiological problems. Deep-space radiation could be a big problem, so developing effective shielding is necessary. It also leads to body-wide genetic changes that researchers are just barely beginning to detect, let alone understand.

The longest time any person has consecutively lived in space is about a year— not three — and the longest mock mission to Mars lasted about 500 days. (The crew got extremely bored.)

“We really don’t have a lot of data on what happens to a human in microgravity beyond a year,” Porterfield said.

Despite his worries, Porterfield said he’s excited that SpaceX is holding a workshop (and likely more in the future) to tackle the company’s greatest challenges yet with some of the world’s leading experts.

He’s even hopeful that SpaceX — pending “substantial” investments in funding and staff — might pull off a viable crewed Mars mission within a couple years of Musk’s 2024 target.

“They’re not hindered by politics or government bureaucracy,” he said. “They’re capable of being much more nimble than NASA.”