SpaceX confirmed the deployment of its Starlink fleet just one hour and one minute after launch. The 60 new satellites will bolster a world-wide network of internet-beaming devices dubbed the Starlink Constellation. SpaceX founder Elon Musk, 48, hopes to provide the entire planet with broadband from tens of thousands of satellites in low-Earth orbit (LEO).

The bold SpaceX plans have, however, been met with a wave of criticism from concerned astronomers.

In October this year, Mr Musk applied for an additional 30,000 Starlink satellites to be launched.

In total, the California-based company could fly as many 42,000 new satellites into LEO.

Astronomers are concerned such an unprecedented number of artificial objects above Earth will hinder astronomical observations. 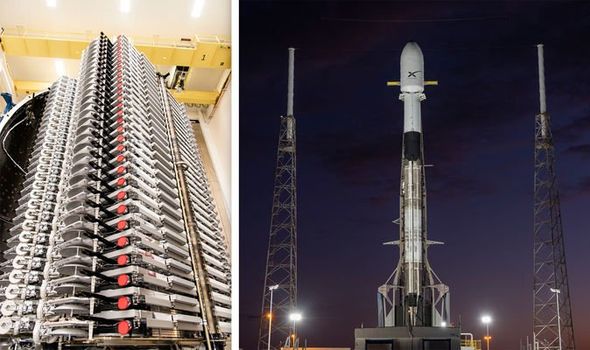 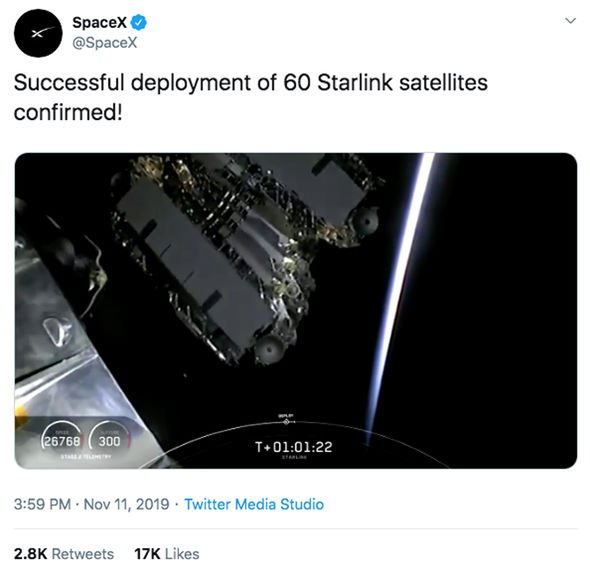 In March 2019, the Union of Concerned Scientists has only listed 2,062 satellites in LEO.

Dr Anthony Tyson of the Large Synoptic Survey Telescope (LSST) in northern Chile fears Starlink satellites have the potential to spoil observations carried out by LSST.

He told The New York Times: “It’s really a mess.”

The International Astronomical Union (IAU) expressed the same sentiment in June this year, warning highly reflective constellations of satellites above Earth are of concern.

The IAU said in a statement: “We do not yet understand the impact of thousands of these visible satellites scattered across the night sky and despite their good intentions, these satellite constellations may threaten both.”

According to SpaceX, the Starlink satellites are painted a pitch-black colour to reduce their visibility at night.

It potentially threatens the science of astronomy itself

But Dr Tyson argued powerful telescopes like the LSST will still pick up satellites like Starlink, even if steps are taken to minimise their impact.

Dr James Lowenthal of Smith College in the US similarly fears the impact of having so many satellites populate the night skies.

He said: “If there are lots and lots of bright moving objects in the sky, it tremendously complicates our job. 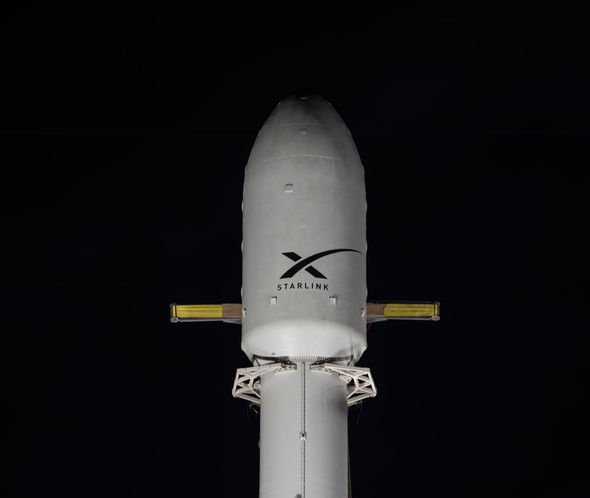 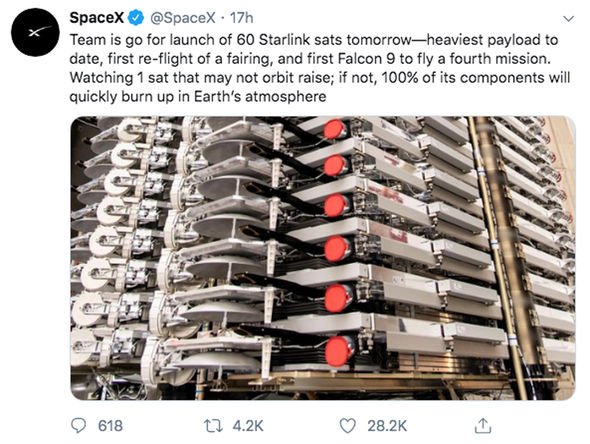 “It potentially threatens the science of astronomy itself.”

The reusable rocket’s fairing was also used on the Falcon Heavy’s Arabsat-6A launch this year.

The Falcon 9’s first stage booster rocket then returned to Earth where it landed on SpaceX’s Of Course I Still Love You droneship in the Atlantic.

Around 12.31am GMT, SpaceX also confirmed the Starlink payload was the company’s heaviest rocket launch to date.

SpaceX tweeted: “Team is go for launch of 60 Starlink sats tomorrow – heaviest payload to date, first re-flight of a fairing, and first Falcon 9 to fly a fourth mission.

“Watching one sat that may not orbit raise; if not, 100 percent of its components will quickly burn up in Earth’s atmosphere.”