SpaceX promises it’s still on course to send astronauts to the ISS next year, despite a US government report claiming the 2019 launch is ‘unlikely’

SpaceX has vowed to send its first astronauts into orbit on schedule next year as part of a plan to restore America’s dominance in the space race.

Gwynne Shotwell, president of the aerospace manufacturing company, said an unmanned flight to the International Space Station (ISS) in November would pave the way for SpaceX’s first manned mission in April 2019.

‘Predicting launch dates could make a liar out of the best of us. I hope I am not proven to be a liar on this one,’ she told journalists during a briefing in Los Angeles.

The pledge from the firm, which is spearheaded by multi-billionaire entrepreneur Elon Musk, is in stark contrast to an independent report from the US government.

The government report, published in July, claimed it was highly unlikely SpaceX would be able to send astronauts to the ISS next year.

However, SpaceX president Ms Shotwell said the mission is scheduled to go ahead as planned as soon as SpaceX was ‘ready to fly these folks safely.’

The news comes at  SpaceX held a secret conference in Colorado called the ‘Mars Workshop’ to formulate a plan to land people on Mars and build an outpost on the planet. 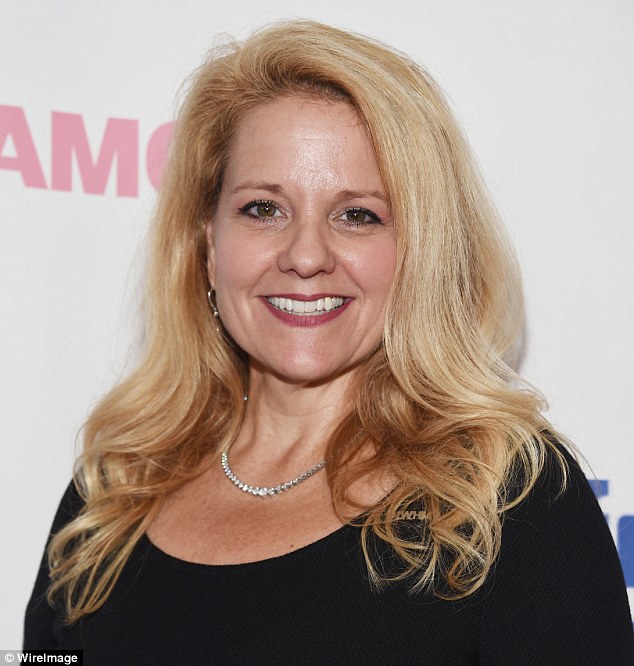 Gwynne Shotwell, president of SpaceX, said an unmanned flight to the International Space Station in November would pave the way for a manned mission in April 2019 and the mission is on schedule

Nasa awarded contracts to SpaceX and Boeing in 2014 as part of its commercial crew program, which aims to help private industry build spaceships for low-Earth orbit.

On August 3, the agency named the first nine astronauts who will fly to space in Boeing and SpaceX vehicles in 2019 – a mix of novices and veterans.

Those named for the SpaceX test crew include shuttle veterans Bob Behnken, Michael Hopkins and Douglas Hurley, alongside naval aviator Victor Glover, a novice to spaceflight.

The flights to the ISS will be the first time flights to put people into orbit have left US soil since the iconic space shuttle program ended in 2011.

For seven years, Nasa astronauts have hitched rides to the orbiting outpost on Russia’s Soyuz spacecraft – at a cost of $80 million a seat.

During a media briefing about SpaceX’s plans, president MsShotwell said the manned mission will go ahead as soon as SpaceX is ‘ready to fly these folks safely.’

‘Next in line we want to make sure not only that we get these folks up and back safely but that that’s reliable and a mission that we conclude,’ she added.

‘We want to hit all the boxes do everything we need to do, to demonstrate that this vehicle is capable of taking astronauts up from US soil as often as Nasa will allow us.’

WHO ARE THE NINE ASTRONAUTS GOING TO SPACE NEXT YEAR ON COMMERCIAL AIRCRAFT?

On August 3, Nasa named the first nine astronauts who will fly to space on Boeing and SpaceX vehicles in 2019 – a mix of novices and veterans.

Is a U.S. Air Force colonel

Was chief of the Astronaut Office, the highest leadership role

Is a U.S. Air Force colonel and member of the Texas Wing of the Civil Air Patrol

Is a U.S. Navy commander and test pilot with more than 3,500 flight hours

Will be taking his first trip to space

Is Boeing’s director of Starliner Crew and Mission Systems

Retired from the Navy as a captain and pilot; also a former shuttle astronaut

Is from Pomona, California

Is a U.S. Navy commander and test pilot with almost 3,000 hours flying

Has made 400 carrier landings and has flown 24 combat missions

Is a U.S. Air Force colonel and flight test engineer

Is a U.S. Marine Corps colonel

Has a bachelor’s in civil engineering from Tulane University

Is a lieutenant colonel in the U.S. Marine Corps and F/A-18 test pilot with more than 2,500 flight hours

Will be taking her first trip to space

Is from Needham, Massachusetts

Is a U.S. Navy captain and test pilot

Has a bachelor’s physical science from the U.S. Naval Academy and a Master of Science in Engineering Management from Florida Institute of Technology 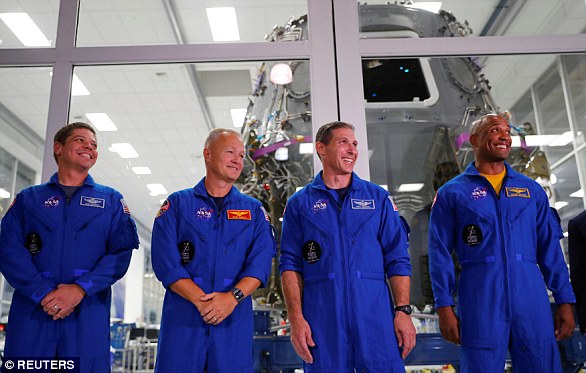 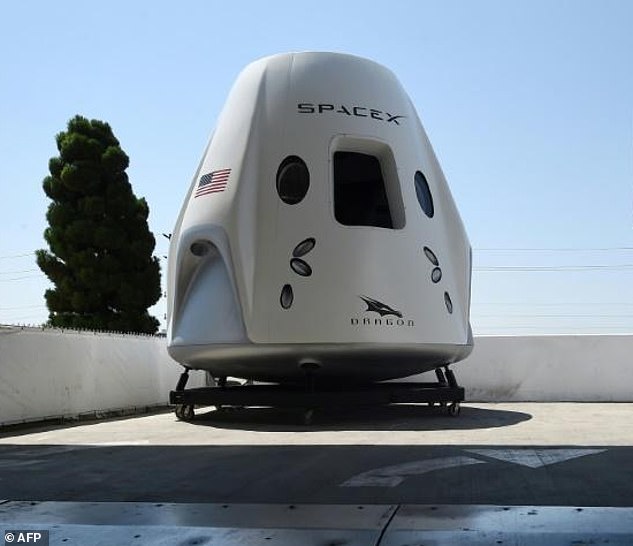 A mock up of the Crew Dragon spacecraft is displayed during a media tour of SpaceX headquarters and rocket factory in Hawthorne, California. The flights to the ISS will be the first leaving US soil to put people into orbit since the iconic space shuttle program ended in 2011 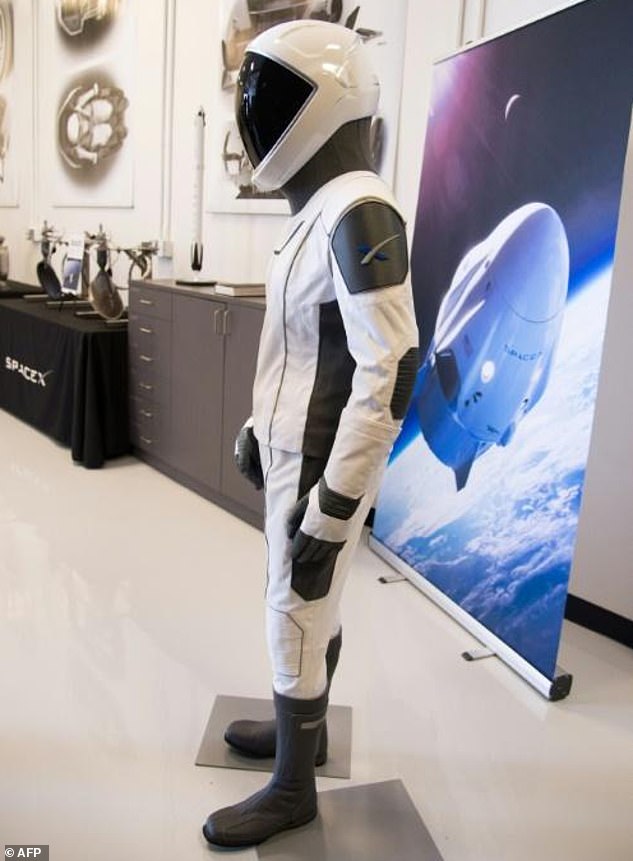 SpaceX unveiled its astronauts, all clad in blue overalls and smiling proudly in front of the module that will transport them to the ISS, to answer questions from the media.

‘Being able to fly as a first flight a vehicle as a test pilot is a ‘once in a generation’ type of opportunity, so obviously I’m very thankful for it,’ said Mr Hurley.

‘But I would also say that we’ve got a lot of work left to do.’

TIMELINE OF HOW SPACEX WILL TAKE ASTRONAUTS INTO ORBIT

SpaceX has revealed that it will be launching a demo/test flight of its Dragon capsule lkater this year.

It has originally pencilled the launch in for a November launch.

The launch manifesto for the firm states there will be two demo launches before a manned mission.

The first people to board a Dragon Capsule into orbit will be in April 2019, if the original timetable is accurate.

It will use the Falcon 9 rocket to achieve the feat.

The firm sent out 60 invitations to scientists and engineers to participate in ‘active discussions regarding what will be needed to make such missions happen.’

The individuals were asked to keep the meeting private and not to divulge any information about the conference.

According to Ars Technica, the workshop may be ‘the first meeting of such magnitude’ in SpaceX’s quest to land humans on and ultimately colonise the red planet.

No specifics have been divulged by the meeting’s participants but a SpaceX representative told Business Insider that this is not necessarily a new tact for the company.

A spokesperson said: ‘We regularly meet with a variety of experts concerning our missions to Mars.’

The space exploration firm claims it has had the technology to launch and land on mars for some time, but the principle issue focuses around making the missions suitable for human habitation.

‘The main hindrance is the human factor. If you really are going to land a person on Mars, you have to feed them, keep them healthy, and build them habitats,’  D. Marshall Porterfield, the former director of Nasa’s Space Life and Physical Sciences Division said.