Almost a full day after launching from Earth, SpaceX’s Crew Dragon capsule has safely docked with the International Space Station.

Four astronauts – three from NASA and one from the European Space Agency – have officially entered the ISS, after climbing through the hatch.

This brings the total number of crewmembers on the ISS to seven.

SpaceX confirmed the news on Twitter, writing: ‘Four new astronauts through the hatch and seven crewmembers total on the!

‘After almost exactly a day from launch,#Crew3 is aboard the orbiting laboratory.’ 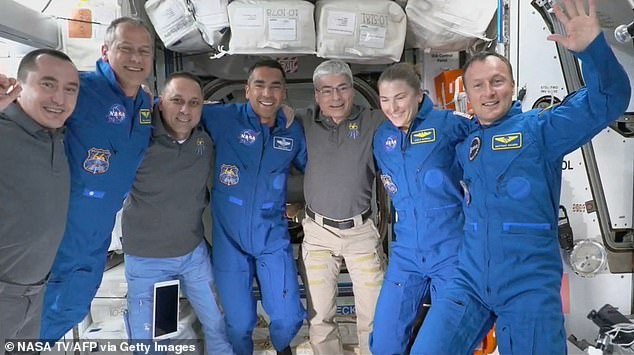 Four astronauts – three from NASA and one fromt the European Space Agency – have officially entered the ISS, after climbing through the hatch. This brings the total number of crewmembers on the ISS to seven

The rendezvous came about 21 hours after the team and its capsule were launched atop a SpaceX Falcon 9 rocket from NASA’s Kennedy Space Center in Cape Canaveral, Florida, on Wednesday night, following a string of weather delays that postponed the liftoff for a week and a half.

The docking took place about 6:30pm EST (23:30 GMT) while the Crew Dragon vehicle, dubbed Endurance, and the space station were flying about 260 miles (420 km) above the eastern Caribbean Sea, according to NASA.

On arrival, the crew took inventory, conducted standard leak checks and pressurized the space between the spacecraft in preparation for opening the hatch to the space station about two hours later.

There were also two test missions to the ISS, one crewed and the other uncrewed:

A live NASA video feed from the station showed the new arrivals floating headfirst through a padded passageway from their capsule into the orbiting outpost.

They were welcomed aboard with hugs from the three current space station occupants – Russian cosmonauts Pyotr Dubrov and Oleg Novitskiy and NASA astronaut Mark Vande Hei, who shared a Soyuz flight with his Roscosmos crewmates to the complex.

Maurer, a materials science engineer, was making his debut spaceflight, as were Chari, a U.S. Air Force combat jet and test pilot, and Barron, a U.S. Navy submarine officer and nuclear engineer.

Shortly after coming aboard, Marshburn pinned astronaut wings to the collars of his three rookie colleagues amid handshakes and smiles.

Both Chari and Barron also are among the first group of 18 astronauts selected for NASA’s upcoming Artemis missions, aimed at returning humans to the moon later this decade, over a half century after the Apollo lunar program ended. 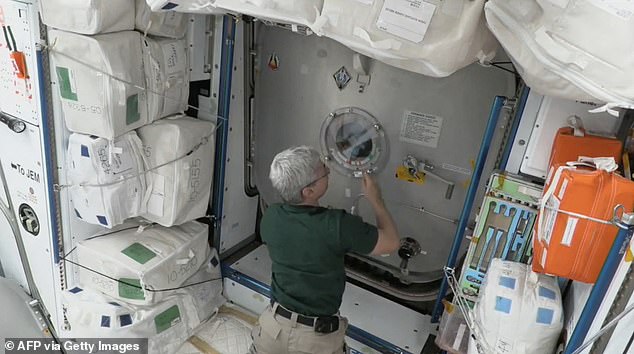 The crew were welcomed aboard with hugs from the three current space station occupants – Russian cosmonauts Pyotr Dubrov and Oleg Novitskiy and NASA astronaut Mark Vande Hei (pictured opening the hatch), who shared a Soyuz flight with his Roscosmos crewmates to the complex 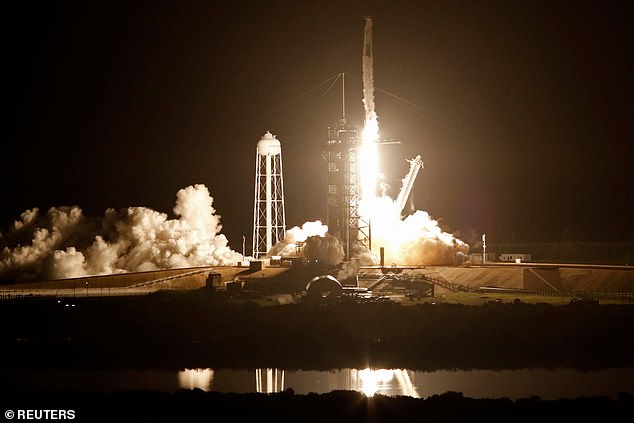 The rendezvous came about 21 hours after the team and its capsule were launched atop a SpaceX Falcon 9 rocket from NASA’s Kennedy Space Center in Cape Canaveral, Florida, on Wednesday night

‘I think we all loved the ride up here,’ Chari said during brief remarks in a welcoming ceremony webcast from the station.

‘It was way smoother than we could have imagined.’ 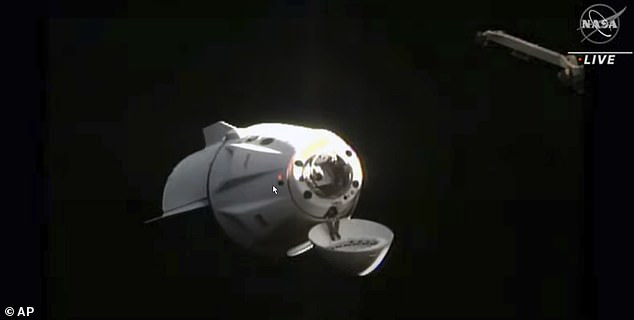 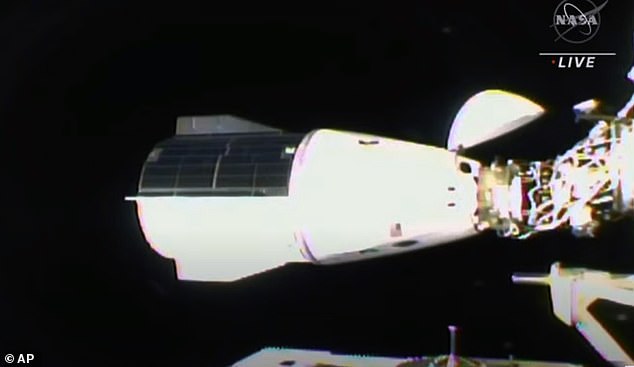 The SpaceX Dragon docking with the International Space Station, with four astronauts on board

The crew arriving on Thursday was officially designated ‘Crew 3’ – the third full-fledged ‘operational’ crew that NASA and SpaceX have flown together to the space station after a two-astronaut test run in May 2020.

‘Crew 2’ returned safely to Earth from the space station on Monday with a splashdown in the Gulf of Mexico off Florida that capped a record 199 days in orbit.

SpaceX, the rocket company formed in 2002 by billionaire Elon Musk, founder of electric car maker Tesla Inc, has logged a total of 15 human spaceflights in 17 months.

This includes its astro-tourism launch in September of the first all-civilian crew sent to Earth orbit without professional astronauts.

The space station, spanning the size of an American football field end to end, has been continuously occupied since November 2000, operated by an international partnership of five space agencies from 15 countries.

An international crew of at least seven people typically lives and works aboard the platform while traveling 5 miles (8 km) per second, orbiting Earth about every 90 minutes.