Home » Science » Sphinx, centaur and panther revealed on the walls of the Domus Aurea

Stunning decorations of a sphinx, centaur and panther are revealed for the first time in 2,000 years on the walls of the Domus Aurea palace built by the tyrannical Roman Emperor Nero

A richly decorated room at a palatial complex in Rome that belonged to Emperor Nero has been rediscovered for the first time in 2,000 years.

Archaeologists accessed the room of the Domus Aurea and found its walls adorned with panthers, centaurs and a mythical sphinx.

Experts chanced upon the room of the ‘Golden House’ which is currently half exposed, with the bottom section still buried underneath two millennia of sediment.

Emperor Nero killed himself at the age of 30 after he was accused of initiating the Great Fire of Rome to build his enormous palace. 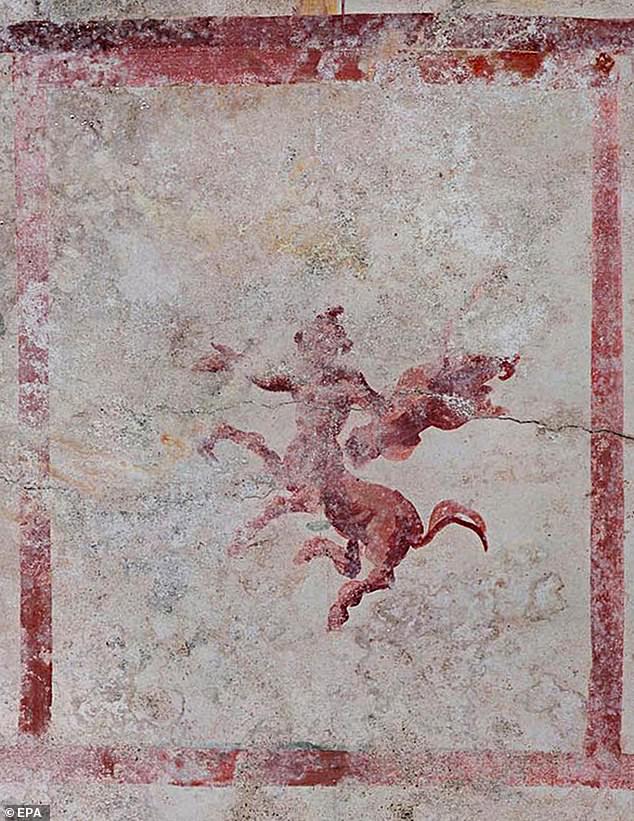 Archaeologists accessed the room of the Domus Aurea and found its walls adorned with panthers, centaurs (pictured) and a mythical sphinx. 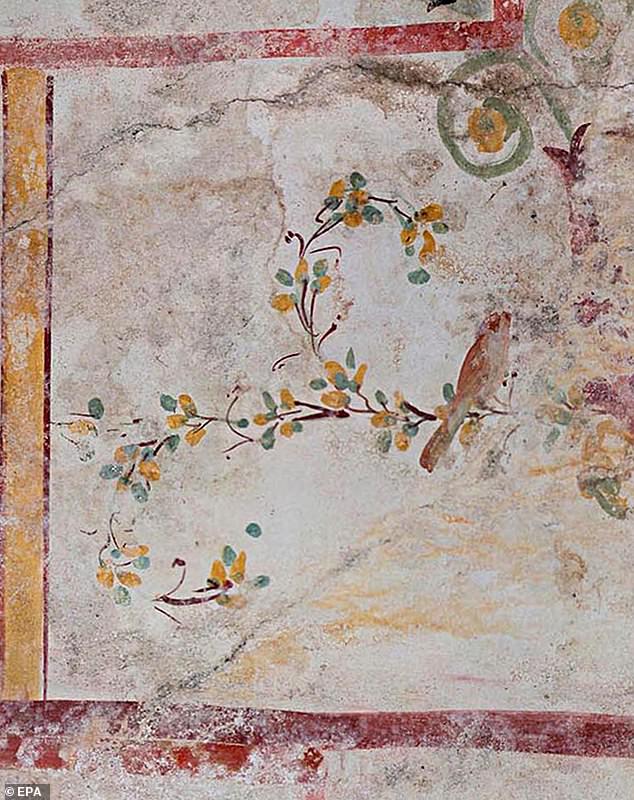 Various floral patterns were also found in the room. The full room will not be unveiled due to concerns about its structural integrity

Small figures are bordered in red and yellow on the walls, with a white background.

One scene shows the god Pan, another a man armed with a sword, quiver of arrows and a shield fighting a panther while the sphinx image shows it on a pedestal.

There are also aquatic creatures, both real and imagined, architectural motifs of the time, vegetal garlands and branches of trees with delicate green, yellow and red leaves.

‘It is the fruit of our strategy that focuses on conservation and scientific research,’ said Alfonsina Russo, the head of the Colosseum archaeological park that the Domus Aurea belongs to.

‘It is an exceptional and thrilling find.’

The discovery was made last year made thanks to a platform erected to restore the vault of another room of the sprawling and sumptuous complex.

The house was built by the controversial emperor in 64AD after a huge fire devastated Rome.

‘We came across a large opening positioned in the northern corner of the covering of the room,’ said Alessandro D’Alessio, the official in charge of the Domus Aurea.

‘Lit up by the artificial light, there suddenly appeared the entire barrel vault of a completely frescoed adjacent room’, he said.

There are no plans to excavate the rest of the room for fear of its structural integrity.

WHO WAS EMPEROR NERO?

He was the last Roman emperor of the Julio-Claudian dynasty and became the heir to the estate of Claudius, his great-uncle.

He became emperor in suspect circumstances, as his mother is believed to have been involved in the death of Claudius.

She then dominated his early life until he cast her aside. Five years after he ascended to emperor he had her executed.

He ruled from between 54 and 68AD and died aged 30 after becoming the first Roman Emperor to commit suicide.

He was driven to taking his own life after he was condemned to death as a public enemy.

It is thought he was responsible for the Great Fire of Rome and blamed it on Christians. 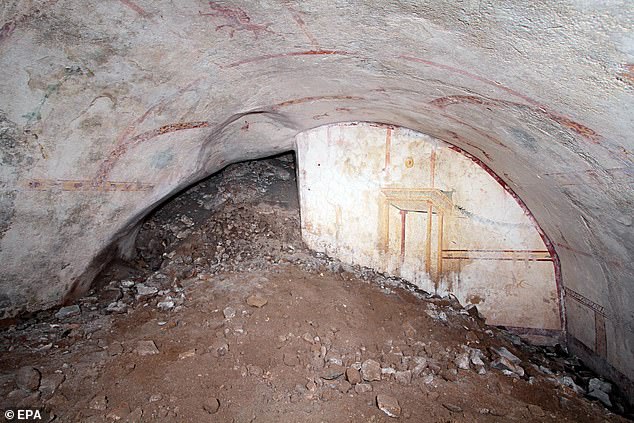 Experts chanced upon the room of the ‘Golden House’ which is currently half exposed, with the bottom section still buried underneath two millennia of sediment (pictured)