Anyone who’s travelled on London Underground’s network will know them – the little black mice that scurry along the platforms and under the rails.

Sam Rowley was so fascinated by these subterranean rodents, he spent a week down the tube trying to picture them.

And one night, he captured an image of two of them literally battling over a morsel of food dropped by a passenger.

That persistence to get the snap has won Sam the Wildlife Photographer of the Year LUMIX People’s Choice award.

Fans of the annual, internationally famous WPY competition were asked to rank some of the images that didn’t quite win its top prizes last October, but were nonetheless fabulous shots. 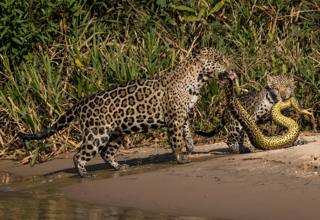 Some 28,000 voted for Sam’s “Station Squabble” as their favourite in this “best of the rest” category.

He spent late nights at a central London tube stop, down on his belly trying to get the perfect low-angle view.

His two subjects had been foraging separately until they chanced across the same morsel of food. For a split second, they argued over who should have it before then going their separate ways.

“I usually take a burst of photos and I got lucky with this shot, but then I had spent five days lying on a platform so it was probably going to happen at some point,” Sam said.

The Londoner is currently working in Bristol as a researcher for the BBC’s natural history film-making unit.

Sam says photographing urban wildlife is his passion. He believes people have a connection with the animals in our cities and towns because these creatures live among us.

He also admires the tenacity of the animals that eke out an existence in what is a very tough environment.

“These tube mice, for example, are born and spend their whole lives without ever even seeing the Sun or feeling a blade of grass. On one level, it’s a desperate situation – running along gloomy passages for a few months, maybe a year or two, and then dying. And because there are so many mice and so few resources, they have to fight over something as irrelevant as a crumb.” 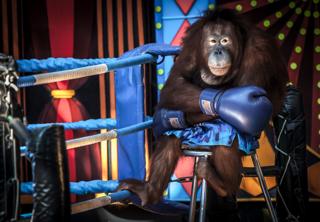 Sir Michael Dixon, the institution’s director, said of the picture: “Sam’s image provides a fascinating glimpse into how wildlife functions in a human-dominated environment. The mice’s behaviour is sculpted by our daily routine, the transport we use and the food we discard. This image reminds us that while we may wander past it every day, humans are inherently intertwined with the nature that is on our doorstep – I hope it inspires people to think about and value this relationship more.”

There were four runners-up, or “Highly Commended”, images in the LUMIX poll.

These included an unfortunate orangutan being exploited for performance, taken by Aaron Gekoski; a dramatic picture of a mother and cub jaguar tackling an anaconda, captured by Michel Zoghzhogi; a touching portrait of a conservation ranger and the baby black rhino he’s looking after, shot by Martin Buzora; and a group of white arctic reindeer pictured in the snow by Francis De Andres.

The 56th WPY competition is currently being judged by a panel of experts, and its grand prize winners will be revealed in October. 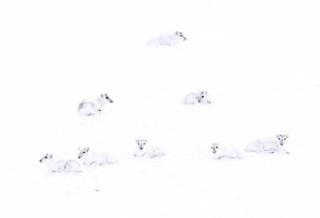 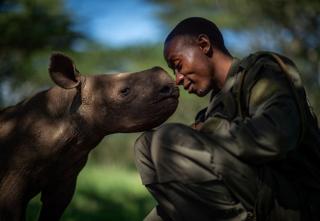 All pictures subject to copyright.