Proof of prehistoric Brexit? Stonehenge exhibition of ancient artefacts reveals how Britain has ALWAYS had a fraught relationship with ‘Europe’

The ebb and flow of our ancient ancestors’ relationship with the Continent will be revealed in a new exhibition at Stonehenge, experts have said.

Objects in the display, which include prized items from the British Museum’s collection of ancient Britain and Europe, range from a 6,500-year-old polished jade axe to an elaborate gold neck piece made around 4,000 years ago.

Through the artefacts, English Heritage’s Making Connections exhibition at Stonehenge – a centre of ancient Britain – highlights how there were different periods of connection with and relative isolation from Europe. 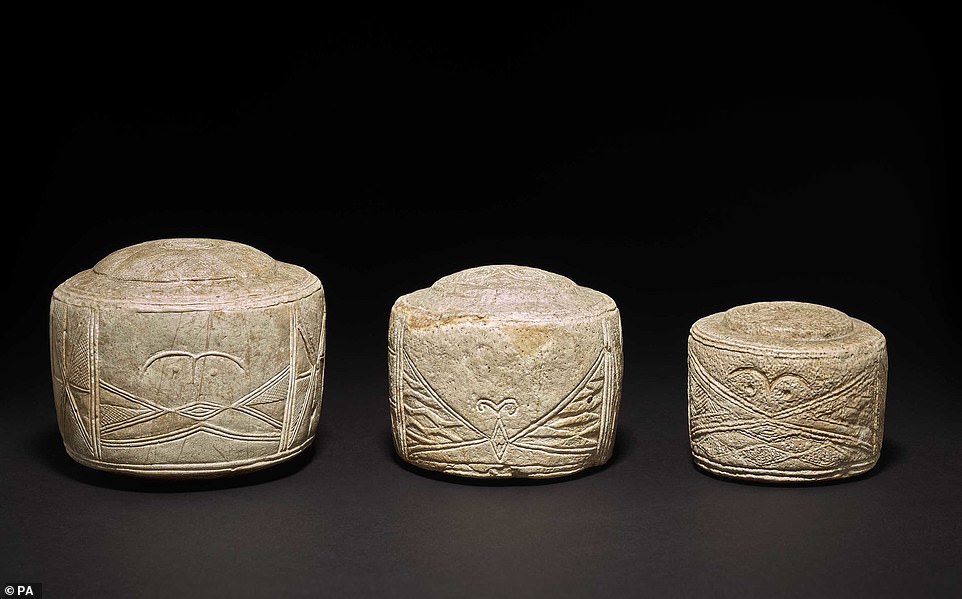 In the early Neolithic period before Stonehenge was built, mass migrations of people who were the first farmers and the earliest metal workers took place.

In the late Neolithic when Stonehenge was being constructed, communities were travelling and exchanging ideas from Orkney to southern England – but there was little or no communication with continental Europe, the experts say.

Later came another period of connection with Europe, and the Beaker culture that brought Bronze Age technology to these shores 4,500 years ago was part of a migration that almost completely replaced the communities of Britain in just a few centuries.

The exhibition opens with a jade axe made of stone from the Italian Alps, brought from continental Europe 1,500 years before Stonehenge was built, which would have been highly prized and connected people to their homelands.

The following period of separation is represented by the ‘Folkton drums’, three chalk cylinders decorated with spirals and stylised faces dating from the late Neolithic around 3,000 BC and found in a child’s burial site in North Yorkshire.

Experts said the style of decoration on the drums is known from megalithic monuments, pottery and other items across Britain and Ireland but not further afield. 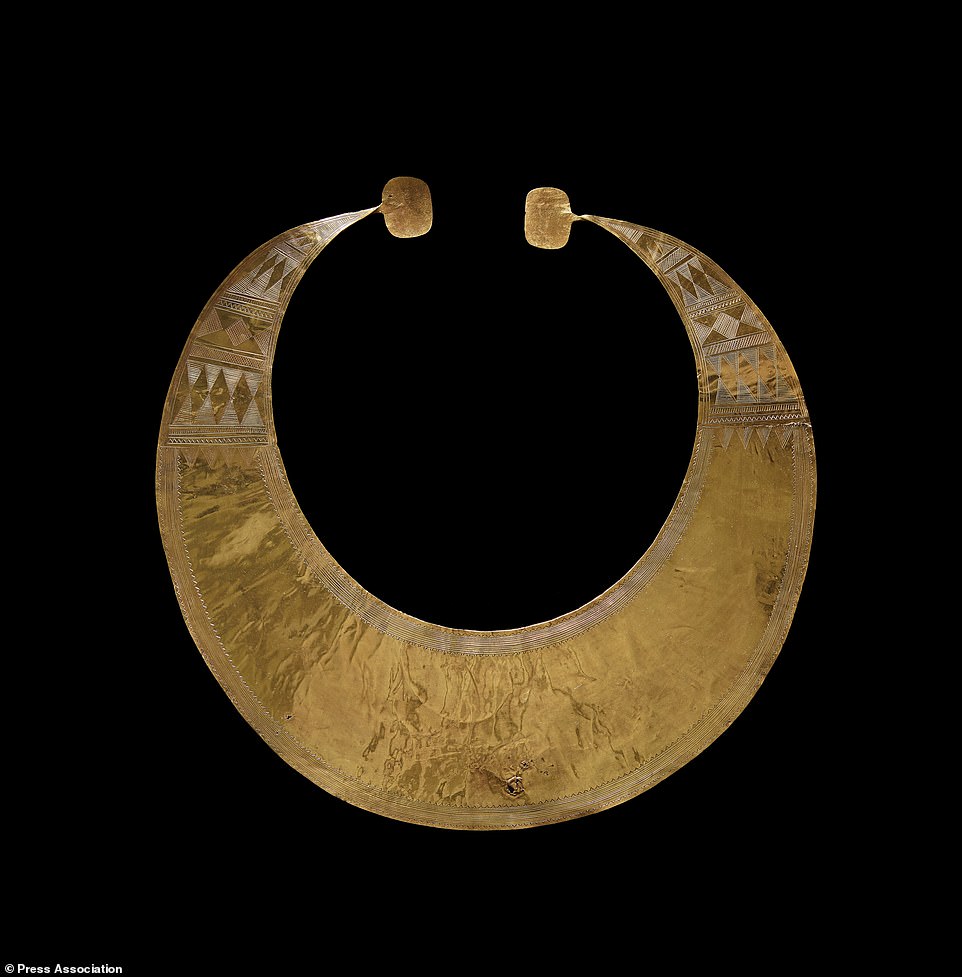 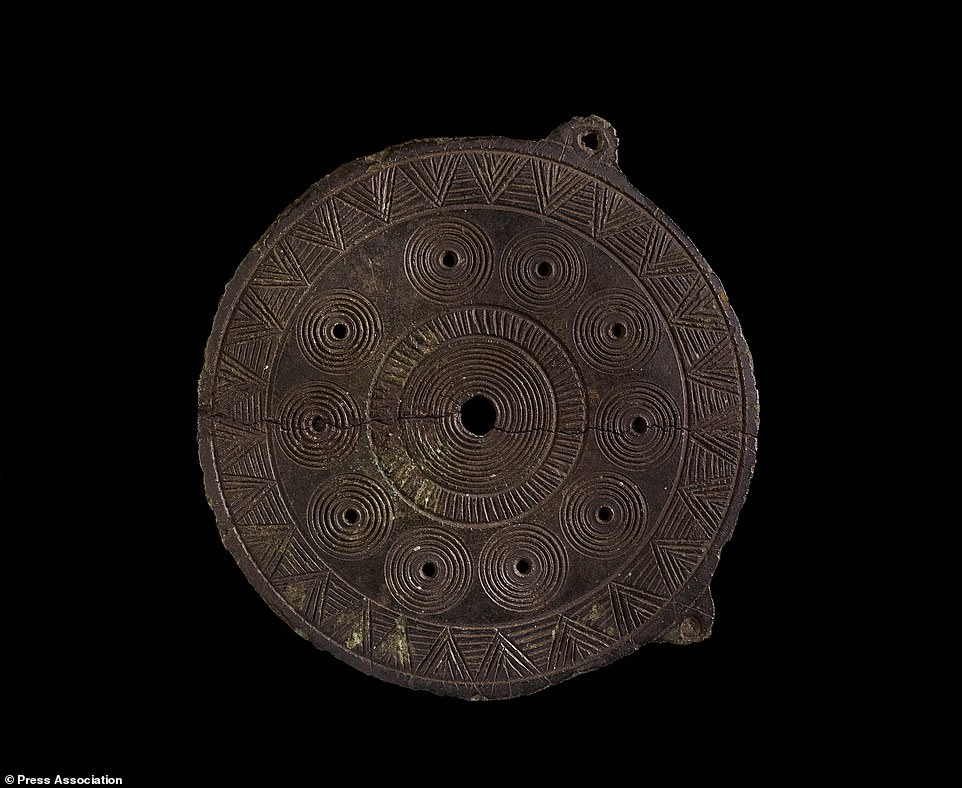 This Bronze Age copper alloy `sun disc´, from Ireland is of a type which has only otherwise been seen in continental Europe 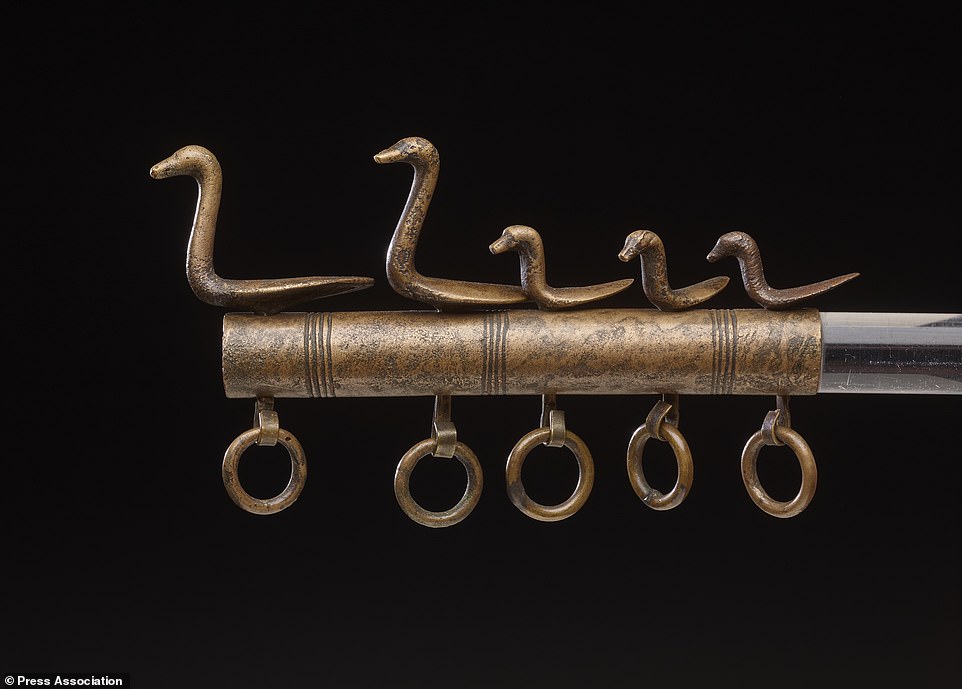 A flesh-hook decorated with birds that was found in County Antrim is going on display. In the late Neolithic when Stonehenge was being constructed, communities were travelling and exchanging ideas from Orkney to southern England 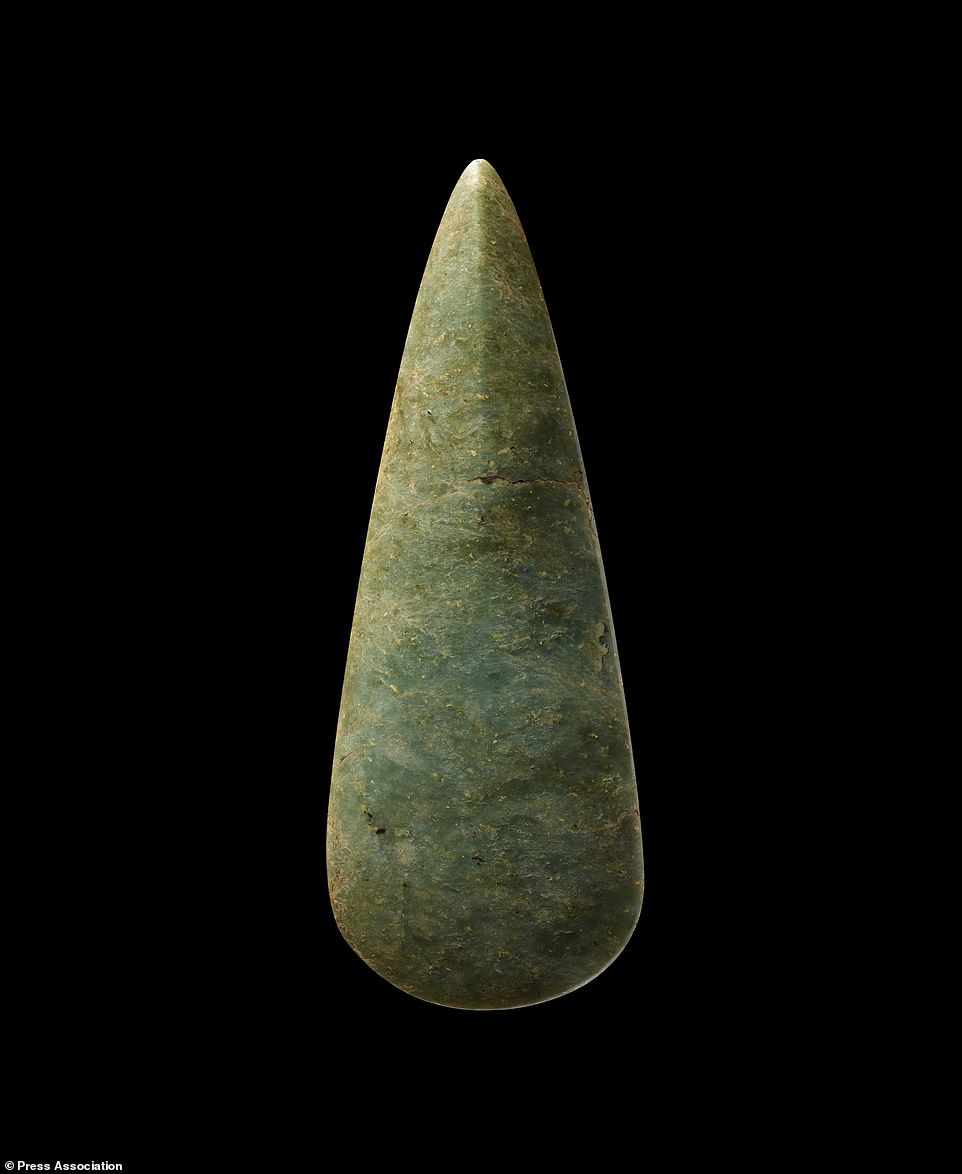 This jade axe shows links to its owners´ continental homeland. The axe was brought from continental Europe 1,500 years before Stonehenge was built, which would have been highly prized and connected people to their homelands

A copper alloy ‘sun disc’ dating from 1500 to 1300 BC and found in Ireland, which is thought to be part of a model chariot pulled by a divine horse, is going on display for the first time in living memory.

Recently rediscovered in the British Museum store, it is of a type otherwise only known from continental Europe and shows that Bronze Age beliefs about how the sun and moon travelled across the sky were shared by people living across the region.

The 4,000-year-old Blessington gold lunula, a beaten-gold crescent neck piece, also found in Ireland, shows that by 2,000 BC people were regularly exchanging metals over long distances.

Though these kind of ornaments are almost exclusively found in Ireland and Britain, the motifs used to decorate them were drawn from European Beaker pottery and textiles, the experts said.

A Bronze Age cup made of a single sheet of gold which shows close connections between southern England and northern France and flesh-hooks for lifting meat out of cauldrons and decorated with birds are also on display.

Susan Greaney, English Heritage historian, said: ‘From insular communities with what appears to be little outside communication, to mass migrations and the sharing of raw materials and finished artefacts, our ancestors have been making and breaking relationships with Continental Europe for thousands of years.

‘Throughout the Neolithic and Bronze Age, Stonehenge stood at the centre of this constantly changing ebb and flow of objects, styles, people and ideas.’

Neil Wilkin, British Museum curator, said: ‘To be able to bring all these objects together for the first time at Stonehenge, one of the most important symbols of ancient Britain, is an exciting prospect.’

Neolithic and Bronze Age objects from the British Museum collections are displayed alongside artefacts borrowed from other lenders, including a Langdale axe from Wiltshire Museum, two carved chalk plaques from Salisbury Museum, and a Grooved Ware pot from Down Farm Museum in Dorset.

Stonehenge was built thousands of years before machinery was invented.

The heavy rocks weigh upwards of several tonnes each.

Some of the stones are believed to have originated from a quarry in Wales, some 140 miles (225km) away from the Wiltshire monument.

To do this would have required a high degree of ingenuity, and experts believe the ancient engineers used a pulley system over a shifting conveyor-belt of logs.

Historians now think that the ring of stones was built in several different stages, with the first completed around 5,000 years ago by Neolithic Britons who used primitive tools, possibly made from deer antlers.

After the Neolithic Britons – likely natives of the British Isles – started the construction, it was continued centuries later by their descendants.

Over time, the descendants developed a more communal way of life and better tools which helped in the erection of the stones.

Bones, tools and other artefacts found on the site seem to support this hypothesis.