Stunning infrared images reveal the moment the solar wind heats up the atmosphere of Jupiter and creates stunning aurora, similar to Earth’s Northern and Southern lights.

The solar wind can heat up the atmosphere of Jupiter to over twice the depth that it can on the Earth, a new study reports.

Changes in the wind, which causes auroras to appear at Jupiter’s poles, lead to rapid responses in the gas giant’s atmospheric chemistry and temperature.

Researchers from Japan studied the giant planet using a heat-analysing telescope based on the summit of Mauna Kea on the island of Hawaii. 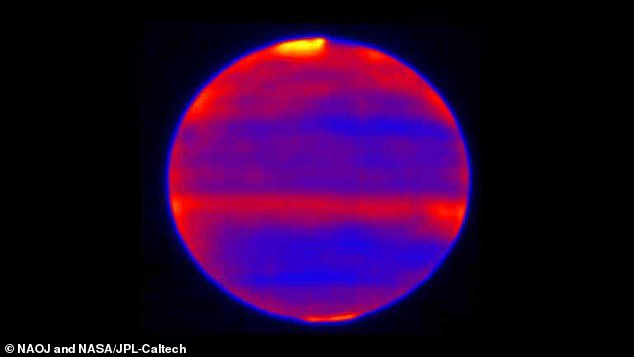 Thermal images of Jupiter’s stratosphere identifying regions of higher (yellow and red) and lower (blue) temperatures were taken using the telescope’s special Cooled Mid-Infrared Camera and Spectrograph. Auroral heating can be seen at both poles

On Earth, the ribbon-like light displays of the aurora borealis and australis – commonly known as the Northern and Southern Lights – are caused when energetic particles blowing in the solar wind breach the Earth’s magnetic shield.

Once in the Earth’s upper atmosphere, these incoming particles interact with gases, heating up and emitting light. The same phenomenon also happens on Jupiter.

But new research shows that the atmosphere of the giant planet is heated to a much greater depth, with the energetic particles penetrating into the lower level of the upper atmosphere, the so-called stratosphere.

The particles get two-to-three times deeper down in the atmosphere than the their counterparts manage on Earth, the researchers report.

‘We’re seeing the solar wind having an effect deeper than is normally seen,’ he added.

The team studied the giant planet using the Subaru Telescope at Hawaii’s Mauna Kea Observatory, which is run by the National Astronomical Observatory of Japan.

During the January, February and May of 2017, the researchers captured infrared images that clearly show hotspots in the planet’s stratosphere, where its aurora are generated, during periods of particularly compressed solar wind.

Within a day of the wind hitting Jupiter, the planet’s atmospheric chemistry changed and the temperature rose, the experts report. 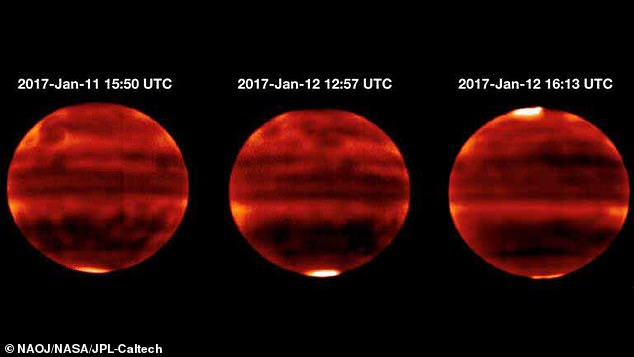 As these infrared images of Jupiter show (in which reds and yellows represent regions of higher temperature), within a day of the wind hitting Jupiter, the planet’s atmospheric chemistry changed and the temperature rose, the experts report

‘What is startling about the results is that we were able to associate, for the first time, the variations in solar wind and the response in the stratosphere,’ said paper author Glenn Orton, who is a planetary scientist at the Jet Propulsion lab.

‘The response to these variations is so quick for such a large area,’ he added.

By understanding how the Sun’s wind interacts with different bodies in the solar system, the researchers aim to learn more about how planets and their atmospheres evolve.

‘Such heating and chemical reactions may tell us something about other planets with harsh environments – and even early Earth,’ added co-author Yasumasa Kasaba, a planetary scientists from Japan’s Tohoku University.

The full findings of the study were published in the journal Nature Astronomy.

WHAT ARE AURORAS AND WHAT TRIGGERS THE STUNNING NATURAL DISPLAYS?

The Northern and Southern Lights are natural light spectacles triggered in our atmosphere that are also known as the ‘Auroras’.

There are two types of Aurora – Aurora Borealis, which means ‘dawn of the north’, and Aurora Australis, ‘dawn of the south.’

The displays light up when electrically charged particles from the sun enter the Earth’s atmosphere.

There are two types of Aurora – Aurora Borealis (file photo), which means ‘dawn of the north’, and Aurora Australis, ‘dawn of the south.’ The displays light up when electrically charged particles from the sun enter the Earth’s atmosphere

Usually the particles, sometimes referred to as a solar storm, are deflected by Earth’s magnetic field.

But during stronger storms they enter the atmosphere and collide with gas particles, including hydrogen and helium.

These collisions emit light. Auroral displays appear in many colours although pale green and pink are common.