For centuries, naturalists have mapped the world’s flora and fauna. They have assembled atlases of migratory birds and cold-water fishes, sketched out the geography of carnivorous animals and alpine plants.

Now, an enormous international team of researchers has added a new volume to the collection: an atlas of microorganisms that can be found in the world’s subways. It contains data collected by more than 900 scientists and volunteers in 60 cities on six continents, from Stockholm to Shanghai, Sacramento to Sydney.

“We had a coordinated phalanx of people with swabs and masks, collecting genetic material from cities around the world,” said Christopher Mason, a geneticist at Weill Cornell Medicine who led the research.

Although each city had its own unique microbial profile, there was a “core urban microbiome” that all of the cities shared, they found. The scientists, members of the international MetaSUB consortium, also discovered more than 10,000 previously unidentified species of viruses and bacteria. They published the findings in the journal Cell on Wednesday.

“We have taken a deep dive into the urban centers to find a breadth and treasure trove of new life-forms,” Dr. Mason said. “The railings and the benches of our cities have sometimes just as much or more diversity than what you find in a rain forest.”

The source and function of many of these microbes remains unknown, and the research reveals how much is left to learn about the microorganisms that surround us. But the findings should not be cause for alarm, the scientists stress.

“We don’t see anything that we are worried about,” said David Danko, one of the paper’s authors and the director of bioinformatics for MetaSUB. “People are in contact with these all the time.” He added, “We don’t want people to be scared of these microbes, because these are just part of the ecosystem that we as humans live in.”

Sample collection for the new study began in 2015, after Dr. Mason’s research on the microbes of the New York City subway system drew international interest. In response, he created the MetaSUB consortium to study the microbes present in cities around the world.

Teams of researchers and volunteers fanned out across the mass transit systems of 60 cities, collecting thousands of samples from 2015 to 2017. They swabbed a wide variety of surfaces, including turnstiles, railings, ticket kiosks and benches inside transit stations and subway cars. (In a handful of cities that did not have subway systems, the teams focused on the bus or train system.)

The scientists’ subterranean sampling expeditions often attracted attention. Some commuters grew so curious that they joined the volunteer swabbing corps, while others insisted that they absolutely did not want to know what was living on the subway poles. Passengers occasionally misunderstood what the researchers were doing with their tiny swabs. “One man effusively thanked us for cleaning the subway,” Dr. Mason said.

The researchers also collected air samples from the transit systems of six cities — New York, Denver, London, Oslo, Stockholm and Hong Kong — for a companion paper on the “air microbiome” that was published on Wednesday in the journal Microbiome.

“This is huge,” said Erica Hartmann, a microbiologist at Northwestern University who was not involved in the study. “The number of samples and the geographic diversity of samples — that’s unprecedented.”

Then the team extracted and sequenced the DNA from each sample to identify the species it contained. In total, across all of the surface samples, they found 4,246 known species of microorganisms. Two-thirds of these were bacteria, while the remainder were a mix of fungi, viruses and other kinds of microbes.

But that was just the beginning: They also found 10,928 viruses and 748 kinds of bacteria that had never been documented. “We could see these were real — they’re microorganisms — but they’re not anywhere in any database,” said Daniela Bezdan, the former executive director of MetaSUB who is now a research associate at the University Hospital Tübingen in Germany.

The vast majority of these organisms probably pose little risk to humans, experts said. Nearly all of the new viruses they found are likely to be bacteriophages, or viruses that infect bacteria, Dr. Danko said. Moreover, genetic sequencing cannot distinguish between organisms that are dead and those that are alive, and no environment is sterile. In fact, our bodies rely on a rich and dynamic community of microbes in order to function properly.

“I think the most important thing is not to freak out,” said Noah Fierer, a microbiologist at the University of Colorado Boulder, who was not involved in the research. “Most of these aren’t pathogens, most of them are probably innocuous, and some may actually be beneficial.”

Some of the novel microbes they found might also turn out to be sources of novel drugs or other useful compounds. “The amount of microbial diversity is just incomprehensibly vast,” Dr. Hartmann said. “There’s so much out there that we just don’t really understand, and there could be all kinds of nifty biotechnologies and all kinds of fun chemistries that we’re not aware of yet.”

In this enormous collection of microbes, however, the scientists were able to identify 31 different species of bacteria, what they called the “core urban microbiome,” that were present in nearly every sample in every city.

Roughly half of these species are bacteria that typically live in and on the human body, especially the skin. They include Cutibacterium acnes, which feeds on the oil on our faces, and Micrococcus luteus, which contributes to the production of body odor by breaking down the compounds in our sweat. (Skin bacteria also made up half of the microbes swirling around in the air, the scientists found.)

The core microbiome also contained soil bacteria as well as some more unexpected species, like Modestobacter marinus, which is typically associated with the ocean. The researchers are not sure why it is in the world’s subway stations, but its high tolerance for salt and ability to withstand radiation may make it especially hardy; it is known to grow well on stone.

In fact, several of the species in the core microbiome have similar characteristics which may help them survive in seemingly inhospitable environments. “A steel railing is probably not a pleasant place to live, but they may have adapted to survive there,” Dr. Mason said.

For the time being, that is just one of several possible theories. “We aren’t able to give a satisfying answer yet for what some of these things are actually doing,” Dr. Danko said.

Beyond this core microbiome, there was enormous variation between cities. Some geographic clustering was evident: The microbial profiles of North American and European cities were distinct from those of East Asian cities. And the closer together two cities were, on average, the more similar their microbial profiles.

In fact, the cities’ microbial signatures were distinctive enough that the scientists could identify, with 88 percent accuracy, where a sample had come from. “Give me your shoe, and if I sequence it, I could probably tell you where you came from in the world,” Dr. Mason said.

What’s driving these differences is not entirely clear. Climate and geography both play some role: Cities closer to the Equator had more microbial diversity than those that were farther away, while some coastal cities had microbes that are typically associated with water.

Commuters in different cities may also be shedding different microbes from their bodies. Previous research has shown that the human microbiome varies individually by age, sex, geography and a variety of lifestyle factors, including diet and medication use.

“What we can speculate, based on other studies, is that the human skin microbiota may be a reflection of the demographics of the commuters, which is different between cities,” said Marius Dybwad, a principal scientist at the Norwegian Defence Research Establishment who leads MetaSUB’s air initiative.

But there’s a lot that remains a mystery, and a lot of variation that remains unexplained. “There’s probably not one explanation,” Dr. Fierer of the University of Colorado Boulder said. “Some cities might have more soil blowing around, or different food items, or different plants contributing microbes to the air that land on the surface, or different hygiene practices — I mean, there’s hundreds of different explanations. But it’s pretty cool that they could see that.” 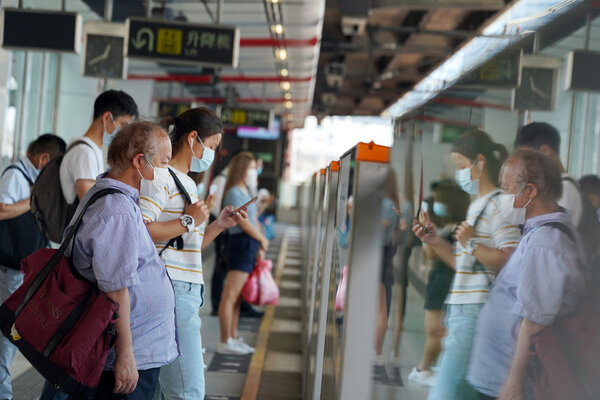 The researchers also compared the genetic sequences they found to databases of genes that may give microorganisms the ability to thwart antibiotics and other antimicrobial compounds. These “antimicrobial resistance genes” were widespread, present in air and surface samples from every city, but their type and abundance varied enormously from city to city.

Microorganisms use their own, self-made antimicrobial compounds to fight off other microbes, and antimicrobial resistance is a natural adaptation; finding these genes does not mean that there are dangerous superbugs lurking in our subways.

“It is not possible to infer anything about health risk from this information alone,” Dr. Dybwad said. “We do not have evidence showing that the organisms are actually alive and metabolically active.”

But a global catalog of antimicrobial resistance genes may ultimately help scientists understand more about the biological defenses that microbes have evolved and help public health officials monitor resistance genes that might be prevalent in their area.

“Can we give some kind of heads-up about what to look for?” Dr. Danko said. “Can we track the spread of bacteria or genes that will make bacteria resistant to antibiotics in the future? Can we use this as a way to inform public health departments in the use of antibiotics going forward?”

In the meantime, the work continues. The researchers in the consortium hope to learn more about the biology and ecology of the species they’re finding, as well as how they might influence human health. Last year, they began sampling urban hospitals, wastewater and public spaces to look for traces of SARS-CoV-2, the virus that causes Covid-19.

And they are continuing to venture into the world’s subway systems, armed with sterile swabs and collection tubes. “We keep finding new things,” Dr. Mason said. “If we stop finding any new species, maybe we’ll stop and say, ‘OK, I think we’ve exhausted most of what you can find in the subway.’”