The joint mission between NASA and the European Space Agency is expected to produce the first images of the sun’s north and south poles.

NASA has released the closest-ever pictures of the sun, which were captured by the agency's Solar Orbiter.

A joint mission with the European Space Agency, the Solar Orbiter was launched on Feb. 9, 2020. The probe completed its first close pass of the star in mid-June and was flying within 48 million miles of the sun when it captured the closest-ever pictures.

“These unprecedented pictures of the Sun are the closest we have ever obtained,” said Holly Gilbert, NASA project scientist for the mission at NASA's Goddard Space Flight Center in Greenbelt, Md., in a statement. “These amazing images will help scientists piece together the Sun’s atmospheric layers, which is important for understanding how it drives space weather near the Earth and throughout the solar system.”

“We didn’t expect such great results so early,” added Daniel Müller, ESA’s Solar Orbiter project scientist, in the statement. “These images show that Solar Orbiter is off to an excellent start.”

Scientists have used the Orbiter’s six imaging instruments to get a close-up view of the sun, even spotting tiny solar flares they dubbed “campfires” that dot the star’s surface.

“The campfires we are talking about here are the little nephews of solar flares, at least a million, perhaps a billion times smaller,” principal investigator David Berghmans, an astrophysicist at the Royal Observatory of Belgium in Brussels, added in the statement. “When looking at the new high resolution EUI [Extreme Ultraviolet Imager] images, they are literally everywhere we look.”

In another project, NASA recently released a stunning 61-minute time-lapse video that shows a decade in the life of the sun. 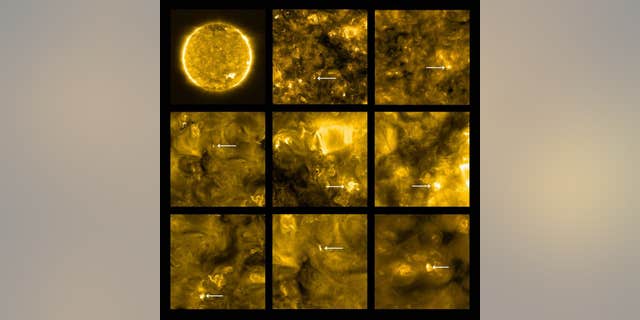 The Solar Orbiter spotted "campfires" on the sun. Locations of campfires are annotated with white arrows.

The video was created from images taken by NASA’s Solar Dynamics Observatory.

Earth’s star continues to reveal its secrets. NASA’s $1.5 billion Parker Solar Probe mission, which launched in 2018, has taken humanity closer to the sun than ever before and the spacecraft is helping scientists shed new light on the star.