Swarms of AI driven robots that can patrol borders from the land, sea and sky could soon be manning Europe’s borders.

A mass network of drones, land vehicles and water crafts is being developed into fully automated surveillance systems with the support of EU countries.

Multiple sensors on roaming robots will be able to identify and track human activity and report risks to border officials.

Concerns have been raised that such powerful technology in the wrong hands have could be used to develop ‘killer robots’. 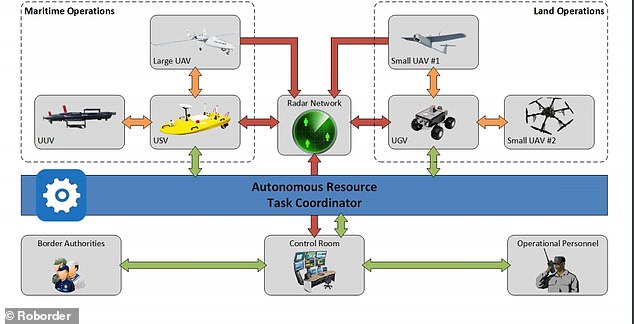 Swarms of AI driven robots that can patrol borders by surveillance of the sea (top left) and land (top right) could soon be manning Europe’s borders. The data will feed into a central task coordinator which can relay some of the information to different functional teams

The AI driven network of land, sea and air robots, officially described as an ‘Autonomous Swarm of Heterogeneous Robots for Border Surveillance’, is known as Roborder.

The robots will include drones and land vehicles which can individually hold multiple sensors and coordinate to form an ‘inter operational network’, according to Roborder’s website.

There will also be static sensors stationed at fixed points made up of ‘passive radars, passive RF-signal sensing devices and thermal cameras’.

An official statement on the Roborder website listed its aims for three upcoming pilots that will cover different scenarios and security breaches.

The project is being developed by a consortium of border controls and collaborators in Portugal, Estonia, Italy, Greece, Bulgaria, Romania and Hungary, where the pilots will be tested.

Its lead coordinator is located in Lisbon, Portugal.

The first of the three pilots will aim to identify early tracking of illegal activities that includes ‘unauthorised sea border crossing and land border crossings’.

It will be deployed at the Bulgarian-Turkish borders to track and monitor illegal activities and use microwaves from cell phones to track individuals and identify human activity.

It will also monitor the movement of illicit substances across the Estonian-Russian borders and well as detect explosive devices.

The second will track illegal communications and try to prevent drug and weapons smuggling, as well as human trafficking by picking up wireless communications that mask such activity.

The third pilot will try to detect early signs of pollution accidents at borders such as spills. 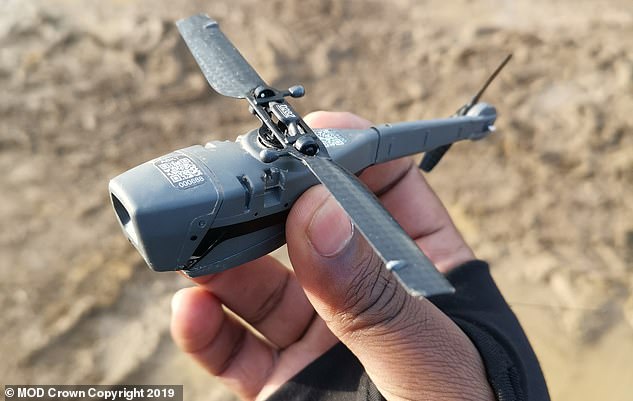 A network of drones, land vehicles and water crafts is being developed by Roborder into automated surveillance systems with the support of EU funding. The image shows The Black Hornet 3, the world’s smallest tactical UAV (unmanned Aerial vehicle) which could be used

There are a number of security and human rights concerns related to the project, which has been largely funded by an €8 million (£7m) EU research and innovation grant since 2017 known as Horizon 2020.

The International Committee for Robot Arms control (ICRAC) which is supporting the Campaign to Stop Killer Robots has also voiced concerns about the rise of technology that could support ‘killer robots’ in general.

Professor Noel Sharkey from the University of Hallam, which incidentally, is a collaborator of Roborder, is a lead member of this committee.

In an interview with the Italian magazine Il Manifesto, Professor Sharkey explained the fatal dangers of the technology as weapons: ‘At the beginning of the Stop Killer Robot campaign we were accused of wanting to slow down innovations. We just want to prevent two functions of the machines: target selection and targeting.’

A number of institutions are involved in the development of the mass network of AI robots, including CENTRIC (Centre of Excellence in terrorism, resilience, intelligence and organised crime research) at the University of Hallam in the UK. 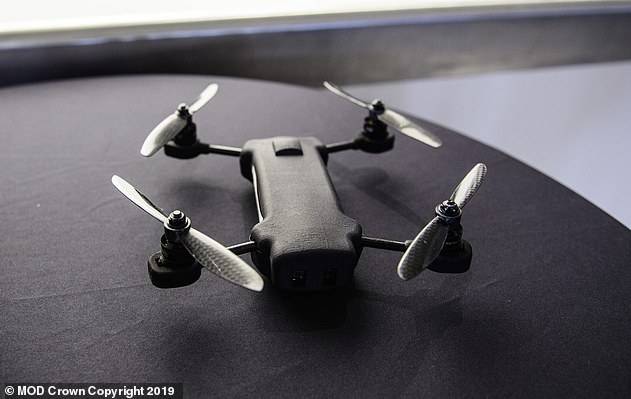 In a move to bring the latest ‘cutting-edge’ AI technology to the frontline, the British Army will deploy around 200 mini drones ‘smaller than a human hand’ (pictured) in the battlefield

According to research by The Intercept Roborder’s developers could also be violating the terms of their EU funding, which is specifically aimed at ‘research and innovation designed for non-military projects’.

But the technology could easily be used for militarisation, which it says the developers have previously admitted.

The Intercept also claims to have obtained leaked documents that raises ethical concerns and about the program.

According to the obtained report, the risks that the results of the classified results could land in the wrong hands, have been noted.

Intercept wrote: ‘Roborder’s developers argued that these ethical concerns did not apply to their work, stating that their only goal was to develop and test the new technology, and that it would not be sold or transferred outside of the European Union during the life cycle of the project.’

Many governments around the world are already developing their own AI robots for militarisation, including the UK.

British Army plans this year will see 200 miniature drones ‘smaller than a human hand’ deployed on the battlefield to provide soldiers with an eye in the sky.

These mini-drones, dubbed Black Hornet, could take over the life-threatening surveillance and reconnaissance duties currently undertaken by soldiers.

The MOD is investing £66million ($87m) in robotic systems, which will also include automated supply delivery drones.

The system will use data relayed from multiple sensors on unmanned mobile robots including aerial, water surface, underwater and ground vehicles that will operate alone and as a swarm, and from static networked sensors.

It is a three-year, EU Horizon 2020 funded project that aims to develop an intelligent solution for the patrolling and protection of EU borders.

It will be piloted to detect early signs of the following incidents: