The volcano alert level for Taal is 3, meaning geologists are braced for an eruption in a matter of weeks. According to the Philippine Institute of Volcanology and Seismology (PHIVOLCS), Alert level 3 represents a high level of volcanic unrest.

The alert is marked by sustained seismic activity, plumes of smoke belching from Taal as well as toxic gas emissions and the movement of magma underground.

On Friday, PHIVOLCS warned of 116 tremors were detected around Taal volcano in the 24 hours since midnight GMT (8am local time).

The Taal Volcano Network recorded, in addition, two low-frequency earthquakes, which could be a sign of molten rock entering the volcano.

PHIVOLCS warned: “These earthquakes signify magmatic activity beneath the Taal edifice that could lead to eruptive activity at the Main Crater.” 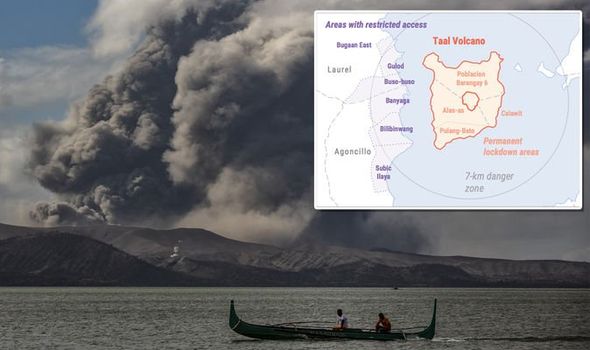 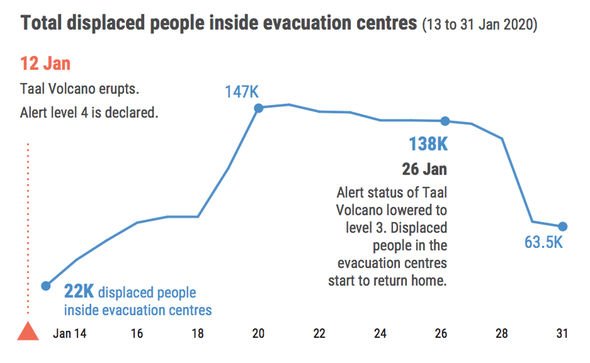 The agency warned the residents of Luzon Island to stay clear of the volcano in a 4.3-mile-wide radius.

Access to the danger zone is restricted in parts of Agoncillo, Laurel and Batangas.

According to the UN Office for the Coordination of Humanitarian Affairs, about 486,000 people have been affected by the erupting volcano since January 12.

On Friday, the fiery mountain sitting in the middle of Taal Lake was coughing up plumes of dirty steam and smoke.

The volcanic plumes were seen reaching heights between 1,640ft and 2,296ft, drifting in a southwest direction.

At the same time, PHIVOLCS said emissions of toxic sulphur dioxide (SO2) have dropped below instrumental detection.

Although eruptive activity has ceased since two blasts tore through Taal on January 12 and January 13 respectively, the volcano is still at risk of erupting.

These earthquakes signify magmatic activity beneath the Taal edifice

Philippine Institute of Volcanology and Seismology

Since January 12, Philippine Seismic Network (PSN) has recorded a total of 763 volcanic earthquakes around Taal.

The seismic activity was marked by fissures splitting the ground open on the southern parts of Luzon Island.

At least 177 of the quakes peaked at magnitudes between 1.2 and magnitude 4.2. 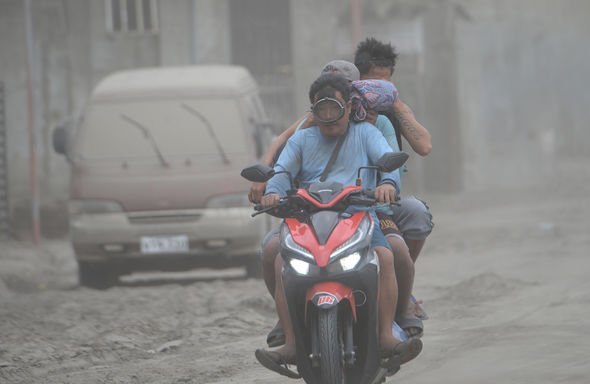 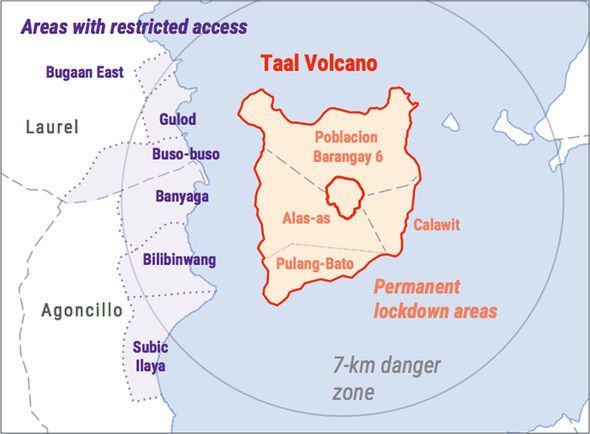 Between January 29 and January 31, the PSN recorded seven quakes between magnitude 1.7 and magnitude 2.5.

The agency said: “DOST-PHIVOLCS recommends that entry into the Taal Volcano Island as well as into areas over Taal Lake and communities west of the island within a 7km radius from the Main Crater must be strictly prohibited.

“Local government units are advised to assess areas outside the 7km radius for damages and road accessibilities and to strengthen preparedness, contingency and communication measures in case of renewed unrest.

“People are also advised to observe precautions due to ground displacement across fissures, frequent ashfall and minor earthquakes.”

Riverside communities are at risk of lahars – fast-moving streams of mud, debris and volcanic ash mixed with water, particularly after heavy rainfall.

PHIVOLCS said: “Civil aviation authorities must advise pilots to avoid flying close to the volcano as airborne ash and ballistic fragments from sudden explosions and wind-remobilized ash may pose hazards to aircrafts.

“DOST-PHIVOLCS is closely monitoring Taal Volcano’s activity and any new significant development will be immediately communicated to all stakeholders.”