How grunting influences perception in tennis: Players may believe the ball has been hit harder than it has – but they WON’T be distracted, experts say

Controversial grunting noises made by tennis players during top matches influences player’s perceptions of the game and the prediction of ball flight, according to a new report.

Psychologists have been attempting to unravel the role of auditory perception in the sport sport in a bid to discover exactly what impact it has.

Grunting sounds produced by some tennis players when hitting the ball are on a par with motorbikes or chainsaws, at noise levels of around 100 decibels, they found.

While players may believe the ball has been hit harder than it has, they won’t be distracted by the noises, experts from Jena University in Germany report. 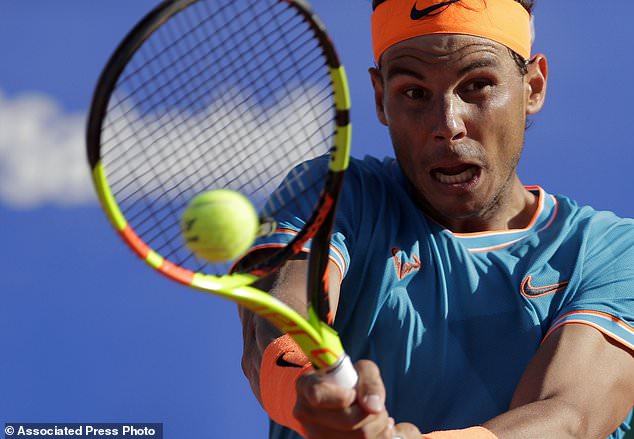 Controversial grunting noises made by tennis players during top matches influences player’s perceptions of the game and the prediction of ball flight, according to a new report. Spain’s Rafael Nadal – known for his grunting – returns the ball to Austria’s Dominic Thiem (file photo)

While fans react to these impressive exhalations with either annoyance or amusement, the habit has also been a source of intense debate among professionals.

For instance, Serena Williams has said that she is not bothered by opponents grunting in the heat of the competition.

In contrast, former world number one Martina Navratilova has complained that grunting masks the sound of the racket striking the ball, making it – unfairly – harder to predict the ball’s trajectory.

The question of whether this common complaint is justified has now been examined in a new study by a team of sport psychologists from Friedrich Schiller University, Jena, led by Dr Florian Müller and Professor Rouwen Cañal-Bruland.

For this study, the research team conducted a series of experiments in which experienced players were shown video clips of rallies from a professional tennis match.

After observing players hitting the ball, they had to work out the ball’s trajectory and indicate where it would land.

Largely unnoticed by participants, though, the intensity of the grunting noises was manipulated.

Results indicate that grunting does have an effect – but not the one claimed by Navratilova.

There was no evidence that grunting caused a distraction effect. 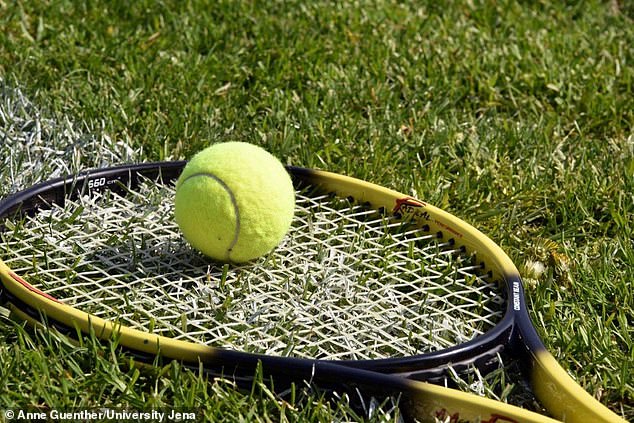 Grunting sounds produced by some tennis players when hitting the ball are on a par with motorbikes or chainsaws. Psychologists have been attempting to unravel the role of auditory perception in the sport sport in a bid to discover exactly what impact it has (stock image)

In spite of the supposed irritation, participants’ level of error in predicting where the ball would land was the same – regardless of the intensity of the grunts.

Instead, it was shown that the louder the grunting, the further the participants assumed the ball would fly.

This reaction was observed even when the noises could only be heard after the racket had made contact with the ball, as is usual in many professional matches.

‘We assume that players account for the physiological benefits provided by grunting,’ Dr Müller said.

‘This possibly explains why an effect can be observed as a result of the grunting, but the ability to anticipate the ball’s trajectory remains unaffected,’ Dr Müller added.

According to Dr Müller and his colleagues, the results of the study suggest that Navratilova’s claim needs to be reconsidered.

For the sport psychologists, it is also evidence that sensory impressions other than sight are of importance in sport as well, and that scientists should look at these more closely in future.

For this reason, too, they want to stay ‘on the ball’ and investigate the phenomenon further.

To get closer to real-world conditions, in the next step participants will have to catch a tennis ball on the touchscreen in real time.

Ultimately, the experiment could even be conducted during a real match on a tennis court – as long as no one in the neighbourhood is disturbed by excessively loud grunting.

DOES GRUNTING DURING TENNIS IMPACT AN OPPONENT?

There has been some preliminary experimental work that showed grunting may mask important auditory information used by an opponent.

Participants in a study were asked to watch video clips of a professional tennis player striking the ball with or without an accompanying auditory stimulus (a grunt).

Their task was to determine as quickly and accurately as possible whether the ball was being hit to their left or right side. Results revealed the grunt did impair the speed and accuracy of their directional decision-making.

Taking the results from the lab onto the court, it has been suggested that the 30-millisecond delay in responding when an additional auditory stimulus is present would mean a typical rally shot would be picked up two feet later, relative to when no grunt is present.

This means more time pressure on the opponent and less preparation time, which is certainly not advantageous to their performance.

How a grunt impairs performance is less clear. As anecdotally suggested by many professional players, a well-timed grunt can mask important auditory information used by a player as the racket strikes the ball.

Another suggestion is that a grunt could draw a player’s attention away from the sound of racket-ball contact to the actual grunt, which in turn may impair their timing.

Finally, a grunt may draw visual attention away from the processing of the visual information conveyed at racket-ball contact. There is currently no clear evidence to support any of these suggestions.