Home » Science » The Amazon bursts its banks every FOUR years

Amazon flood risk has increased five-fold: The world’s largest river now bursts its banks every FOUR years because of the strong warming of the Atlantic Ocean

The Amazon floods five times more frequently than it did a century ago, new research has cautioned.

Scientists believe the world’s largest river now bursts its banks every four years because of the strong warming in the Atlantic ocean and cooling of the Pacific.

This in turn drastically impacts weather patterns and rainfall in the Amazon.

Their findings show that in the first part of the 20th century, severe floods with water levels exceeding 95 feet (29 metres) occurred just every 20 years. 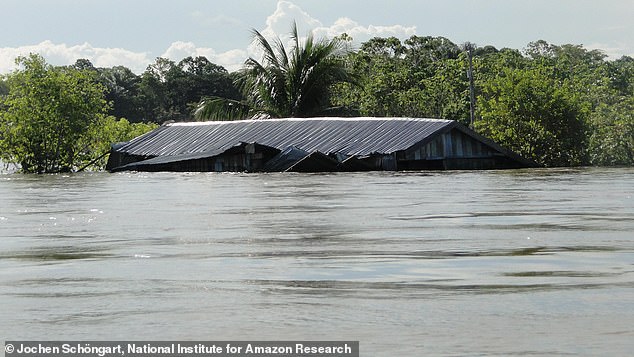 Pictured is an inundated house in central Amazonia during the record-breaking flood in 2012. The Amazon floods five times more often than it did a century ago, warns new research

Water levels have been recorded each day in Port of Manaus, Brazil, since the beginning of the last century.

Drawing on the 113 years of water level records, researchers found extreme floods and droughts have become more frequent over the last two to three decades.

Study lead author, Dr Jonathan Barichivich, from Universidad Austral de Chile and former Research Fellow from the University of Leeds, said: ‘Increases of severe droughts in the Amazon have received a lot of attention by researchers.

‘However, what really stands out from this long-term river record is the increase in the frequency and severity of the floods.

‘With a few minor exceptions, there have been extreme floods in the Amazon basin every year from 2009 to 2015.’

According to the study, increased flooding is linked to a strengthening of the Walker circulation.

This is an ocean-powered system of air circulation caused by differences in temperature and pressure over tropical oceans.

The circulation is caused by differences in heat distribution between the ocean and land.

Co-author Professor Manuel Gloor, from the School of Geography at Leeds, said: ‘This dramatic increase in floods is caused by changes in the surrounding seas, particularly the Pacific and Atlantic oceans and how they interact.

‘Due to a strong warming of the Atlantic Ocean and cooling of the Pacific over the same period, we see changes in the so-called Walker circulation, which affects Amazon precipitation. 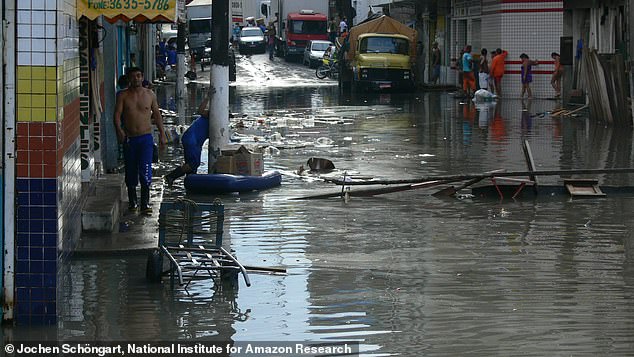 Pictured is a flooded area in the centre of Manaus in 2009.  According to the study, the increased flooding is linked to a strengthening of the Walker circulation 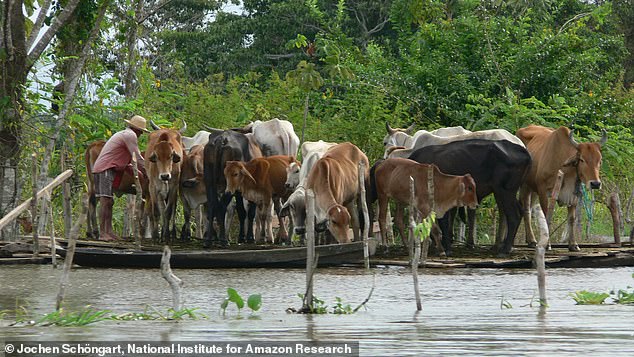 Pictured are cattle on a floating meadow in the Central Amazonian floodplains during the severe inundation in 2009. The ultimate underlying cause for the warming of the Atlantic is not entirely clear

‘The effect is more or less the opposite of what happens during an El Niño event.

‘Instead of causing drought, it results in more convection and heavy rainfall in the central and northern parts of the Amazon basin.’

The ultimate underlying cause for the warming of the Atlantic is not entirely clear.

However, in addition to natural variability, global warming is at least partially responsible but in an unexpected and indirect way, according to the study.

As a result of greenhouse warming, wind belts in mid to high latitudes in the Southern hemisphere have shifted further south.

This has opened a window for transport of warm Indian ocean waters around the tip of Africa, via the Agulhas current, towards the tropical Atlantic.

The changes to the Amazon Basin’s water cycle have had severe consequences for people and livelihoods in Brazil, Peru, and other Amazonian nations. 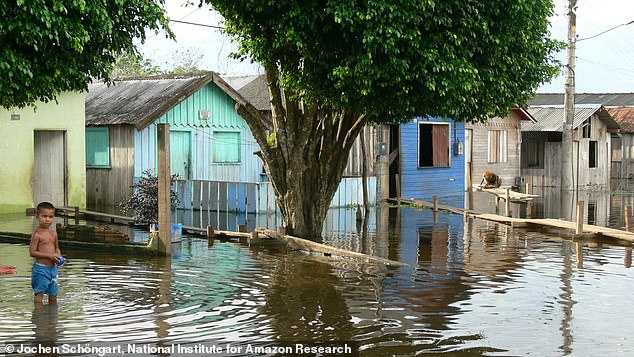 Pictured is a flooded suburb in the city of Itacoatiara in 2009. Flooding can contaminate water supply and spread disease, as well as destroy homes and livelihoods

He explained that these extreme flooding events last for many weeks and have disastrous consequences.

Flooding can contaminate water supply and spread disease, as well as destroy homes and livelihoods.

Economic activities in the floodplains such as agriculture a cattle ranching are strongly affected.

The research indicates that these floods are not over yet. The year 2017, which was not included in the study, again saw water levels rise to over 95 feet.

As the tropical Atlantic is expected to continue warming faster than the tropical Pacific over the next few decades scientists expect more of these high water levels.

The findings of this study could help predict the probability of flooding extremes in the Amazon in advance and help mitigate the impacts for urban and rural Amazonian populations.

WHAT HAPPENED TO PEOPLE LIVING IN THE AMAZON BEFORE THE EUROPEAN SETTLERS?

Parts of the Amazon previously thought to have been uninhabited were home to thriving populations of up to a million people from as early as 1250 AD, researchers have found.

Archaeologists have uncovered evidence there were up to 1,500 fortified villages in the rainforest away from major rivers in the Amazon – two-thirds of which are yet to be discovered.

This area was continuously occupied from 1250 until 1500 AD, after which point the population dramatically declines.

‘They were probably impacted by European diseases even before European settlers set foot in the area as their diseases spread very quickly’, Dr Jonas Gregorio de Souza, from the University of Exeter’s Department of Archaeology told MailOnline.

‘With the Portuguese settlements in the area there was later direct violence and slavery. This was the final ‘coup de grace’ for them’, he said.

Dr Gregorio de Souza said researchers did not know how rapid the decline was or how many of the individuals managed to survive.

The experts estimate that there would have been between 1,000 and 1,500 enclosed villages, and two-thirds of these sites are yet to be found.